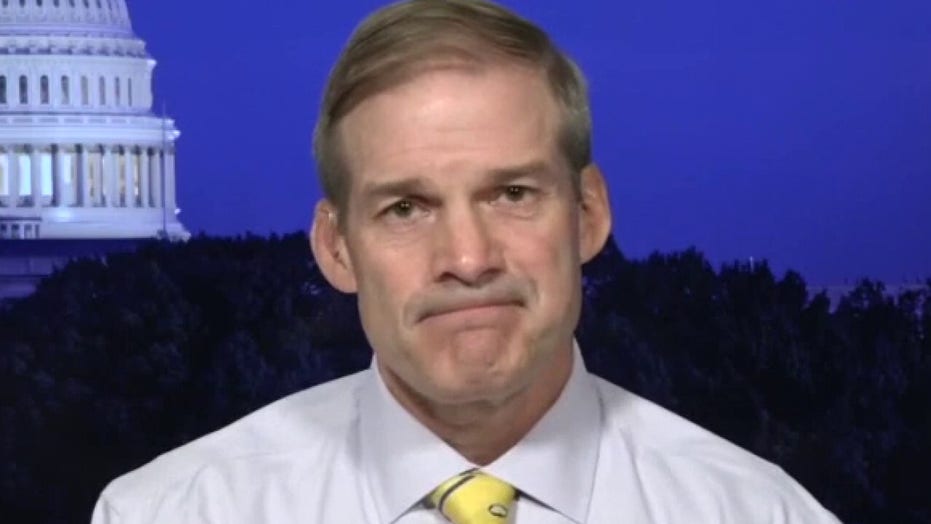 Liberal media loses it over Rep Jim Jordan's appointment to the Jan. 6 commission

Ohio Republican tells 'The Ingraham Angle' who he wants to investigate

Pelosi, D-Calif., said Wednesday she won't appoint Reps. Jim Jordan from Ohio or Jim Banks from Indiana – two strong allies of former President Donald Trump – to the committee formed to investigate the cause of the Jan. 6 Capitol riot and make recommendations on preventing future violence.

Her decision immediately sparked backlash from House Minority Leader Kevin McCarthy, R-Calif., who called Pelosi's move "unprecedented" and threatened to have all Republicans boycott the committee if Jordan and Banks didn't get appointed.

"Unless Speaker Pelosi reverses course and seats all five Republican nominees, Republicans will not be party to their sham process and will instead pursue our own investigation of the facts," McCarthy said in a statement.

Jordan has been a dogged defender of Trump and serves as the top GOP member of the House Judiciary Committee. He previously dismissed the new select committee as "Impeachment Round 3" and a new platform to go after the former president.

REP. JEFFRIES SAYS JAN. 6 COMMITTEE IS AN OPPORTUNITY FOR GOP TO SHOW THEY REALLY 'BACK THE BLUE'

"Speaker Pelosi just admitted the obvious, that the Jan. 6 Select Committee is nothing more than a partisan political charade," Jordan said in response to being rejected.

Banks is the leader of the influential Republican Study Committee and recently teamed up with Trump in June to tour the southern border and call for a return of Trump's immigration policies. McCarthy tapped Banks to be the top GOP member of the Jan. 6 committee, where he would lead the Republican response.

"We said all along that this was a purely partisan exercise by the Democrats and Nancy Pelosi’s rejection of me and Jim Jordan shows once again she is the most partisan figure in America today," Banks said Wednesday.

Pelosi, who has the final say on select committee appointments, said she's rejecting both Banks and Jordan to preserve the "integrity" of the committee's work.

"With respect for the integrity of the investigation, with an insistence on the truth and with concern about statements made and actions taken by these Members, I must reject the recommendations of Representatives Banks and Jordan to the Select Committee," Pelosi said in a statement. "The unprecedented nature of January 6th demands this unprecedented decision."

Pelosi said she accepts McCarthy's three other picks for the panel: Reps. Rodney Davis of Illinois, Kelly Armstrong of North Dakota and Troy Nehls of Texas.

The Jan. 6 committee is scheduled to hold its first hearing on Tuesday to spotlight first-hand accounts from four police officers who were defending the Capitol that day.

Pelosi pointed out that even without McCarthy's five GOP members, the committee will still be bipartisan since she picked Rep. Liz Cheney, R-Wyo., to serve alongside her seven Democratic picks. Cheney backed Pelosi's decision to oust Jordan and Banks. "We have a bipartisan quorum, we can proceed," Pelosi said.

Asked about McCarthy's accusations that she's playing politics, Pelosi responded Wednesday: "Perhaps you mistake me for someone who would care about that."

While Republicans have dismissed the new committee as a political ploy, Democrats have argued there needs to be an in-depth investigation on what went wrong and how to prevent such an attack from happening again.

Pelosi had initially wanted an independent, nonpartisan commission to investigate the attack, but the Senate ultimately rejected that proposal. So Pelosi used her powers as speaker to form the select committee.

"We need a comprehensive investigation as to who organized this attack, who paid for it, how they nearly succeeded in overthrowing a presidential election, why they did it and how we must organize ourselves to prevent anything like it from ever happening again," Pelosi said in a statement.

"This represents an egregious abuse of power and will irreparably damage this institution," McCarthy said of Pelosi's decision to reject his picks. "Denying the voices of members who have served in the military and law enforcement, as well as leaders of standing committees, has made it undeniable that this panel has lost all legitimacy and credibility and shows the speaker is more interested in playing politics than seeking the truth."