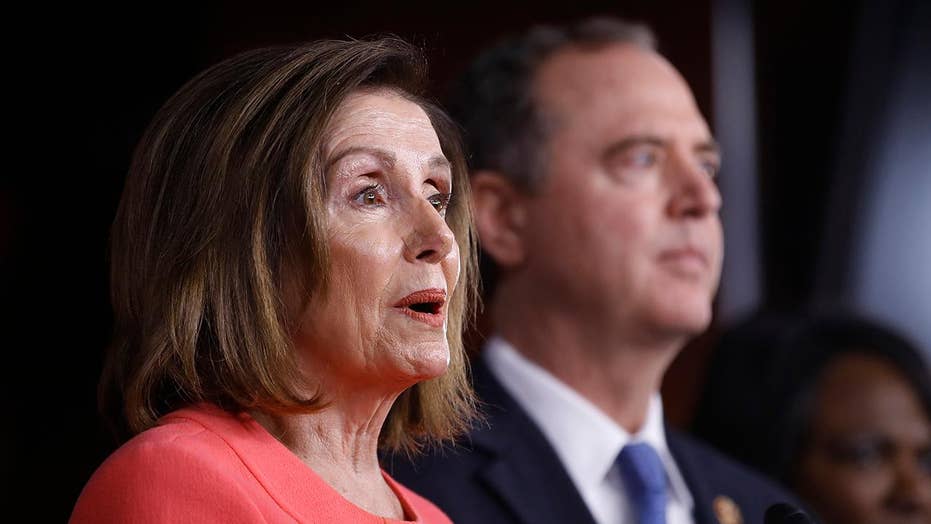 House Speaker Nancy Pelosi on Wednesday announced the seven lawmakers who will serve as impeachment managers to prosecute the case against President Trump in his imminent Senate trial.

“This is about the Constitution of the United States,” Pelosi said, as she presented the Democrats' legal team and noted that she put an emphasis on "litigators" in assembling them.

The managers include House Intelligence Committee Chairman Adam Schiff, D-Calif., who will be the lead manager and who directed much of the impeachment inquiry out of his committee, and House Judiciary Committee Chairman Jerrold Nadler, D-N.Y., whose panel drafted the articles of impeachment.

Trump hit back in a tweet after the announcement: “Here we go again, another Con Job by the Do Nothing Democrats. All of this work was supposed to be done by the House, not the Senate!”

Pelosi defended her decision to delay sending the articles to the upper chamber for an entire month -- despite taunts from Republicans that it accomplished nothing -- saying that "time has been our friend in all of this because it has yielded incriminating evidence."

Pelosi, in holding back the impeachment articles for weeks, had sought to pressure Republicans to commit to allowing new testimony and documents. Some Republicans are open to this, but Senate Majority Leader Mitch McConnell, R-Ky., wants to decide such matters after the process has started.

Meanwhile, a White House official told Fox News on Tuesday that the president’s legal defense team in the looming impeachment trial would be led by White House Counsel Pat Cipollone. The official said that Trump lawyer Jay Sekulow would also serve on the president’s defense, as well as Cipollone deputies Michael Purpura and Patrick Philbin.

After several days of procedural steps later this week, the Senate is poised to launch into the heart of the impeachment trial as early as next Tuesday. McConnell on Tuesday shot down the idea being floated by the president earlier this week of bypassing a trial and dismissing the articles altogether. GOP senators argue they'd rather pursue acquittal.