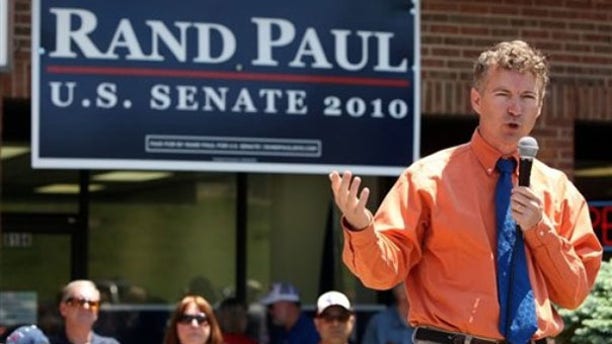 Rand Paul speaks to supporters at his Senate campaign headquarters in Florence, Ky., May 15. (AP Photo)

Tea Party activists are "unhappy" with the status quo and want to see a government "once again restrained by the Constitution," Kentucky Republican Senate primary candidate Rand Paul told Fox News on Monday.

Paul, the Tea Party-backed political upstart, is running in one of three tough races scheduled for Tuesday, which could mark whether incumbents have enough political machine to fight off insurgent candidates.

The bundle of contests could provide clues as to where voters are leaning in the hundreds of congressional races on the ballot this November.

"There's an enormous momentum out there," Paul said.

The latest survey by Public Policy Polling, a Democratic firm, showed Paul with 52 percent, compared with 34 percent for Grayson.

Paul has the support of 2008 GOP vice presidential candidate Sarah Palin, retiring Sen. Jim Bunning and evangelical leader James Dobson. The PPP poll of 1,065 likely voters was conducted Saturday and Sunday and had a margin of error of 3 percentage points.

Paul leads by double digits in most polls.

The eventual Republican Senate nominee in Kentucky will likely face a well-funded Democrat in the general election. Lt. Gov. Daniel Mongiardo and Attorney General Jack Conway are the front-runners in a close race for the Democratic nomination.

Kentucky is solidly Democratic by voter registration, but tends to vote Republican in federal races. McConnell said Sunday that no matter who wins the GOP primary, the party will unite for the general election.

In Pennsylvania, a new poll out Monday showed Sen. Arlen Specter and Rep. Joe Sestak neck-and-neck in the run-up to Tuesday's primary pitting the five-term senator against the two-term congressman.

With 16 percent undecided and 25 percent who do back a candidate in the mood to possibly change their mind, predictions on the race are hard to come by.

"The Sestak-Specter race is a dead heat and could go either way," said Peter A. Brown, assistant director of the Quinnipiac University Polling Institute, in a statement.

Specter benefits from party organization, which should help with turnout, but Sestak could win over undecideds, who are more likely to vote for the challenger or not vote, Brown said.

"Slightly more of Specter's voters than Sestak's say they might change their minds. Moreover, as we have seen elsewhere this spring, there is an anti-incumbent mood in the electorate and Specter, with 30 years in the Senate, is the ultimate incumbent," Brown said.

Specter, who switched from a Republican last year to a Democrat, has the power of President Obama and his Organizing for America campaign group behind him. But the National Republican Senatorial Committee put out a memo Monday claiming that Obama has not been able to translate his 2008 popularity into enthusiasm for Democrats in the 2010 races.

"At best the White House political operation will narrowly win two Democratic primaries tomorrow -- at worst they lost both after being heavily involved at the outset," NRSC Executive Director Rob Jesmer said in the memo. "It should raise serious questions in the minds of Democratic Senate candidates whether the president and the Democrats' Washington agenda will be a benefit or a detriment to their campaigns this November."

He says he thinks either challenger will energize the Republican base.

Former Pennsylvania Republican Sen. Rick Santorum said Monday that any late surge by Sestak is partly the result of being an unknown quantity in the state.

"I think that Sestak is polling better than specter is people in Pennsylvania don't really know him that well. I think Once they get to know him, that's to the advantage of the Republicans," said Santorum, a Fox News analyst.

In Arkansas, incumbent Democratic Sen. Blanche Lincoln is also in jeopardy from a challenge on the left. She leads Lt. Gov. Bill Halter in polls, but could fall short of the majority she needs to avoid a runoff in June. Lincoln says she's a target of extremists on the right and left, and has carefully moderated her votes on Capitol Hill recently to reflect her independence.

"The message I'm giving to them is similar to the one I'm hearing from them, and that's Washington is not working for middle-class families in Arkansas," Halter told The Associated Press. "We're talking to them about the need for change. If you send the same people back to Washington, you're guaranteed to get the same results."

"He's running against something he wants to be a part of," Lincoln said of Halter. "There's things about Washington that I don't agree with either, but that doesn't mean I want to run against it. I want to run to change it, and I did and I have. I don't think all of these extreme groups would be coming at me if I was the norm."

Liberal bloggers have put Halter as the winner of the last debate held among Lincoln, Halter and businessman D.C. Morrison, who could deny Lincoln the 50 percent she would need to avoid a June 8 runoff.

But recent polls show that Republican Rep. John Boozman, the likely winner of the GOP primary, holds a double-digit lead over any opponent.

Oregon also holds a primary on Tuesday. But incumbent Democratic Sen. Ron Wyden is facing a longshot challenge from Loren Hooker, who describes himself as a "conservative constitutionalist Democrat" and is backed by the Oregon Tea Party.

A special election to fill the seat held by the late Rep. John Murtha, D-Pa., will also be held Tuesday. A separate Public Policy Polling survey found Republican Tim Burns in a dead heat with Democrat Mark Critz. The poll of 831 likely voters showed Burns with 48 percent and Critz with 47 percent. The margin of error was 3.4 percent.