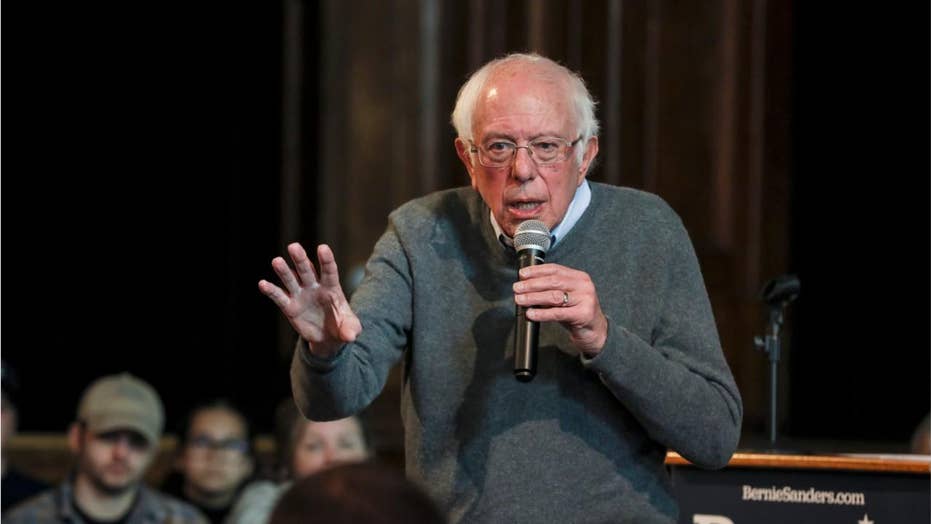 Bernie Sanders’ campaign announced a massive campaign cash haul if over $96 million from over 5 million people.

With exactly one month to go until the Iowa caucuses kick off the presidential primary and caucus nominating calendar on Feb. 3, Sen. Bernie Sanders is on a roll.

“With your help, we can win here in Iowa. I'm feeling very good about Iowa. If we win here in Iowa ... we have an excellent chance to win in New Hampshire,” the populist firebrand from Vermont forecast during a campaign event Thursday night in Muscatine, Iowa.

Still, it's a crowded race for the top spot.

Sanders, who appears to have surged in recent weeks, stands at 20 percent support in the Real Clear Politics polling average of the most recent Democratic caucus public opinion polls in Iowa, a slight 2 percentage points behind former South Bend, Ind., Mayor Pete Buttigieg.

Former Vice President Joe Biden stands at 19 percent in the average, and at 16 percent is Sen. Elizabeth Warren, of Massachusetts – who along with Sanders is the other progressive standard-bearer in the still-large Democratic nomination field.

Sanders, the independent progressive senator, has seen his poll numbers rise both nationally and in Iowa and New Hampshire, which holds the nation’s first presidential primary eight days after Iowa’s caucuses. And on Thursday, Sanders announced he raised a massive $34.5 million the past three months – by far the biggest quarterly fundraising haul by any of the Democratic White House hopefuls.

“The Bernie folks are smarter and better than they were four years ago,” said longtime Iowa-based Democratic strategist and communications consultant Jeff Link, who’s a veteran of numerous White House and Senate campaigns. “They were the big innovators four years ago. I think they’re being innovative again this time around.”

Warren’s seen her poll numbers nationally and in Iowa and New Hampshire deteriorate the past two months – and on Friday she reported raising $21.2 million the past three months, a dip from her July-September third-quarter fundraising haul.

But Warren has something to lean on in Iowa – plenty of boots on the ground in a state where grassroots organization is crucial.

“She’s had the strongest organization of anyone for the longest amount of time,” Link spotlighted. “But there is a real advantage to having the biggest and the best organization the earliest, so that’s something she can rely on.”

He staffed up later than Warren – but Link said, “He came in heavy.”

Making his pitch to Iowa voters, Buttigieg said Thursday in an opinion piece in the Des Moines Register that “traveling throughout Iowa this year, I’ve met workers facing rising costs and stagnant wages. Farmers are paying the price of a reckless trade war.”

And he emphasized that “what I’ve seen in Iowa has made me a better candidate, and it will make me a better president.”

With the clock ticking, Biden went up with two TV commercials on Iowa airwaves on Friday.

Speaking with voters in Manchester, Iowa, on Thursday evening, the former vice president reminded the crowd that “you really do you have a big responsibility because you decide who comes out of the gate. You decide who has the best shot of ultimately becoming the nominee for the Democratic Party.”

Because Biden didn’t declare his candidacy until late April, he was a bit slower in deploying a campaign team in Iowa compared to Warren and Sanders, but he now at full strength for the final push.

Amid perceptions that he wasn't concentrating enough efforts in Iowa, Biden launched an eight-day bus tour through the state last month. And he's on another extended bus swing right now.

And this week, Biden landed an influential endorsement - Rep. Abby Finkenauer - the second youngest person ever elected to the U.S. House.

She’s not part of the top-tier in Iowa, but Sen. Amy Klobuchar’s knocking on the door.

The senator from neighboring Minnesota has seen her star rise in recent months, thanks to a recent well-received presidential primary debate performance. And she’s seen her poll numbers in Iowa edge up to the upper single digits. On Friday, Klobuchar also announced hauling in $11.4 million the past three months, her best quarterly fundraising report to date.

Campaigning in Johnston, Iowa, on Thursday, the senator told voters at her event that they’re the “guardian angels of our democracy.”

Klobuchar’s been heavily concentrating on Iowa and finished hitting all of the state’s 99 counties just before Christmas. On Friday she went up with a new TV spot in the state.

“She’s got a little wind in her sails right now,” Link stressed.

All of these candidates are making their pitches to persuadable Iowa Democrats. As with voters in New Hampshire, polls suggest that many caucus-goers in the Hawkeye State remain undecided or willing to change their mind in the month to go until caucus day.

For the first time, Iowa will provide some caucusing via satellite, to help people who can’t make it to their in-person precinct caucus locations on the night of Monday, Feb. 3. Iowa Democrats have been applying to hold these satellite caucuses at places like factories, firehouses, group homes or community gathering places. The new option should help shift workers, Iowans with disabilities and those serving overseas take part.

As of two weeks ago, roughly 99 locations had been approved – including 25 outside the state.

But Link said that organization still matters, emphasizing that “if you want to win the Iowa caucuses you’ve got to get your people to turn up on a Monday night” in the middle of what will likely be a cold Hawkeye State winter.