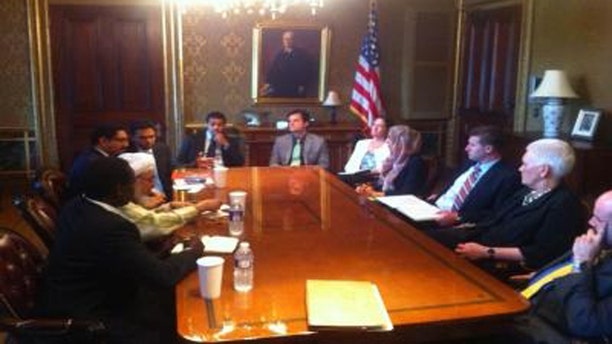 This image, apparently showing a June meeting at the White House, was posted on the website of Abdullah Bin Bayyah.

A senior Obama administration official confirmed to Fox News that members of the National Security Council staff met with a controversial Muslim scholar, but stressed that they were focused on his recent efforts to counter the Al Qaeda narrative.

The official was responding to a report on Wednesday from The Investigative Project on Terrorism, which uncovered a statement on the website of Sheikh Abdullah Bin Bayyah claiming he met June 13 with Obama administration officials at the White House.

Bin Bayyah is vice president of the International Union of Muslim Scholars, a group founded by Egyptian cleric Yusuf Qaradawi -- a Muslim Brotherhood leader who has called for the death of Jews and Americans and himself is banned from visiting the U.S.

Bin Bayyah, for his part, has urged the U.N. to criminalize blasphemy. His group has spoken out in favor of Hamas and in 2009 issued a fatwa barring "all forms of normalization" with Israel.

The administration official confirmed Bin Bayyah met with Senior Director for Development and Democracy Gayle Smith and other members of the National Security Council staff. But the official said they were there to discuss poverty, global health efforts and Bin Bayyah's own efforts to speak out against Al Qaeda.

In 2010, Bin Bayyah publicly rejected a fatwa that had been used as the justification for Al Qaeda terrorism.

In his criticism of the fatwa, he said: "Anyone who seeks support from this fatwa for killing Muslims or non-Muslims has erred in his interpretation and has misapplied the revealed texts."

The Muslim scholar has taken criticism from violent extremists for this position.

He has also worked with the Bill and Melinda Gates Foundation and other groups on global health issues.

Bin Bayyah was named in 2009, by the Royal Islamic Strategic Studies Centre, as one of the 500 most influential Muslims in the world.

His history, though, is mixed. Aside from his ties to Qaradawi, IPT also found Bin Bayyah was vice president at the IUMS when they issued a 2004 fatwa saying that resisting U.S. troops in Iraq is a "duty" for Muslims.