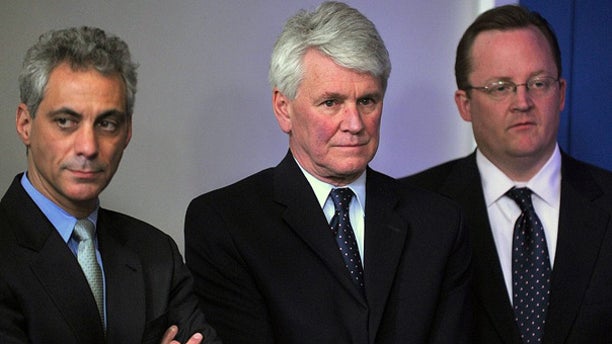 The letter by Jane Hamsher, founder of the liberal Firedoglake Web site, and Grover Norquist, Americans for Tax Reform Chief, was sent Wednesday, one day before the Treasury Department announced that it will lift the $400 billion financial cap on loans to the government-sponsored enterprises to make sure they stay afloat.

It also arrived just before the Federal Housing Financial Authority announced Thursday that it would place salary caps on 11 of the companies' top executives.

Hamsher and Norquist want to know now whether the bailout was in part the result of corrupt practices by Emanuel while he was a board member at Freddie in 2000-2001.

They cited a Chicago Tribune story that described a plan by the executives and the board to use accounting tricks to show shareholders they were reaping massive profits even as they continued down a path of risky investments. The profits were then used to justify the executives' big bonuses. When Emanuel left the board to enter Congress in 2002, he was qualified for $380,000 in stock and options and $20,000 cash.

The two wrote they would like the Justice Department to "begin an investigation into the cause of Fannie and Freddie's conservatorship, into Rahm Emanuel's activities on the board of Freddie Mac (including any violations of his fiduciary duties to shareholders), into the decision-making behind the continued vacancy of Fannie and Freddie's inspector general post, and into potential public corruption by Rahm Emanuel in connection with his time in Congress, in the White House, and on the board of Freddie Mac."

Treasury Department officials said the cap will be replaced with a flexible formula to ensure the companies can stand behind the billions of dollars in mortgage-backed securities they sell to investors.

"The amendments to these agreements announced today should leave no uncertainty about the Treasury's commitment to support these firms as they continue to play a vital role in the housing market during the current crisis," the department said in a statement.

FHFA issued its own ruling Thursday that the base salary for officers besides the CEO, CFO and COO cannot exceed $500,000 a year. That means five officers are exempt and 11 will now face a cap.

The capped executives will be allowed to get up to one-third of their salary in additional incentive bonuses. Any deferred cash salary -- like stock salary received by private company executives who received bailouts -- will be paid partly as a means to keep executive officers working at the GSEs.

FHFA acting chief Edward DeMarco said the compensation deal is to mimic the one set up by pay czar Kenneth Feinberg for private companies.

"The enterprises must attract and retain the talent needed to accomplish (their) objectives. We have worked with the enterprises' boards and sought the guidance of the Special Master of TARP Executive Compensation, to develop competitive compensation packages that benefit from the structural standards created for the TARP-assisted firms," DeMarco said.

Eight of the then-top 11 executives at Fannie Mae left the company just before the U.S. government stepped in with its bailout, as did the four highest paid executives at Freddie
Mac.

Treasury officials will provide an updated estimate for Fannie and Freddie losses when President Obama sends his 2011 budget to Congress in February. The formula Treasury will use will provide the institutions with a sufficient cushion based on the losses they may incur over the next three years.

In their letter to Holder, Hamsher and Norquist wrote that the White House has stonewalled any inquiries into Emanuel's role on the board, noting that the acting inspector general was "stripped of his authority earlier this year by the Justice Department, relying on a loophole in a bill Mr. Emanuel cosponsored and pushed through Congress shortly before he left for the White House."

The White House has not appointed a new inspector general to determine whether crimes were committed by the board to defraud investors, the two noted, and the statute of limitations for empaneling a grand jury is about to run out.

"Under the influence of Rahm Emanuel, the White House is moving a trillion-dollar slush fund into corruption-riddled companies with no oversight in place. This will allow Fannie and Freddie to continue to purchase more toxic assets from banks, acting as a back-door increase of the TARP without congressional approval," Hamsher and Norquist wrote.

Asked about the letter on Thursday, White House spokesman Bill Burton did not address the allegations, saying, "I have the feeling that Rahm's job is very safe."