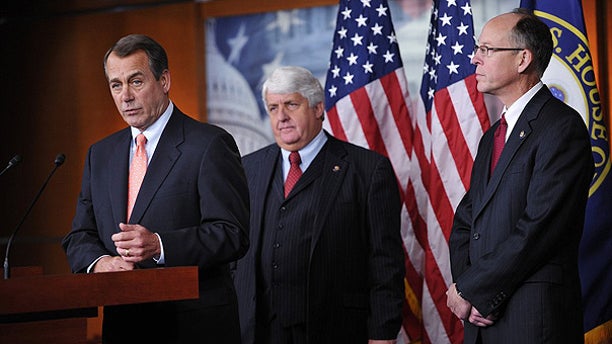 WASHINGTON -- A critical compromise to head off a year-end tax increase for millions of Americans took shape fitfully Thursday in private talks between the White House and congressional Republicans punctuated by outbursts of partisanship.

An extension of unemployment benefits for the long-term unemployed appeared likely to become part of any deal. Additionally, Democrats sought to expand the package with a tax break providing as much as $400 for individual working people and $800 for couples -- even if they pay nothing to the IRS.

Two days after he and newly empowered Republicans exchanged pledges of cooperation at the White House, President Barack Obama expressed optimism about the prospects for agreement in time for enactment by year's end.

Still, he cautioned, "That doesn't mean there might not be some posturing over the next several days."

Not long after Obama spoke, Democrats ignited a partisan row in the House with legislation that would prevent taxes from rising on lower- and middle-income wage earners but allow them to go up for people at higher incomes.

Given Republican objections, that measure has no chance of passing the Senate. But Democrats there insisted on voting on it as a way to dramatize their support for the measure and, officials said, register unhappiness with Obama.

The president has already signaled he will accede to Republican demands for extending tax cuts at all income levels, making votes on the Democratic-backed bill purely symbolic and angering some of the rank-and-file in his party.

But Obama was juggling a pair of top-priority items -- winning enough support from reluctant Republicans to ratify a new arms control treaty with Russia was the second -- and his leverage was reduced in tax negotiations as a result.

The House tax cut measure drew withering criticism from Rep. John Boehner of Ohio, who will become the speaker when Republicans take power in January. "I am trying to catch my breath so I don't to refer to this ... as uh, chicken crap, all right?" he said.

"But this is nonsense, all right? The election was a month ago," he said, referring to voting that swept Democrats from power in the House and reduced their majority in the Senate.

The vote was followed by a meeting in which Treasury Secretary Tim Geithner, Budget Director Jacob Lew and senior lawmakers discussed the compromise plan to extend existing cuts for taxpayers at all income levels.

The outlines of the measure include an extension of income tax cuts enacted while George W. Bush was president for an as-yet-undetermined period of time, perhaps two or three years. The bill is expected to apply to personal income tax rates as well as capital gains, dividends, the alternative minimum tax, the so-called marriage penalty and more.

Any agreement on legislation extending tax cuts to those at upper income levels would mark a surrender on the part of the president, who has long argued the provision isn't warranted in view of the $700 billion cost to the deficit.

At the same time, any measure that was limited to an extension of two or three years would leave Republicans with less than the permanent tax cuts they have long sought.

Attempts to schedule a series of Senate votes on the measure for Friday faltered when an unidentified Republican objected. Instead, they were set for Saturday.

The impetus for an extension of expiring jobless benefits for the long-term unemployed came from the Democrats, although Republicans have signaled they are willing to agree as long as the cost doesn't add to federal deficits.

Without action by Congress, unemployment benefits will run out this month for 2 million people, and several million more will lose them later in the winter. The benefits average $310 a week and go to unemployed workers who have been without jobs for 26 weeks or longer. The checks cut off after 99 weeks.

Earlier Democratic efforts to extend the program into 2011 have been blocked by Republicans demanding offsetting spending cuts.

In addition, officials said Democrats at the negotiating table were seeking extension of the $400-$800 tax break, originally passed as part of the 2009 economic stimulus measure. They also want to extend two other measures in the bill: a tuition tax break for college students and a cut for businesses that hire the unemployed.

Taken together, the day's events amounted to political theater in which Obama and lawmakers in both parties adjusted to the results of midterm elections in which Republicans won control of the House and cut deeply into the Democratic majority in the Senate.

For Obama, that has meant entering into negotiations with Republicans whom he has long held at arms length, particularly those in the House.

For Republicans, it has meant working with the president -- whom they have vowed to defeat in 2012 -- on legislation to accomplish the economic renewal that was the promise of their 2010 campaign.

For their part, Democrats bristled at the prospect of Obama making concessions they had long opposed, and they made it clear, particularly in the Senate, that they would play a role in shaping legislation to their liking.

Sen. Tom Harkin, D-Iowa, said he would oppose legislation that cuts taxes for upper-income taxpayers, even if it includes an extension of unemployment benefits and the accompanying tax cuts for the poor that the administration is seeking.

Another Democrat, Sen. Barbara Mikulski of Maryland, said, "In an institution where we control -- still control -- the House, the Senate and the White House, we ought to pass unemployment compensation."

In the House, outgoing Speaker Nancy Pelosi agreed, and assailed Republicans for wanting to cut taxes for those at upper incomes.

"The tax cut for middle-income families will create jobs because people will spend that money, again, inject demand into the economy, and create jobs ... while the record shows, and recent history acknowledges, that the tax cuts at the high end did not create jobs," said Pelosi, who will become minority leader come January.