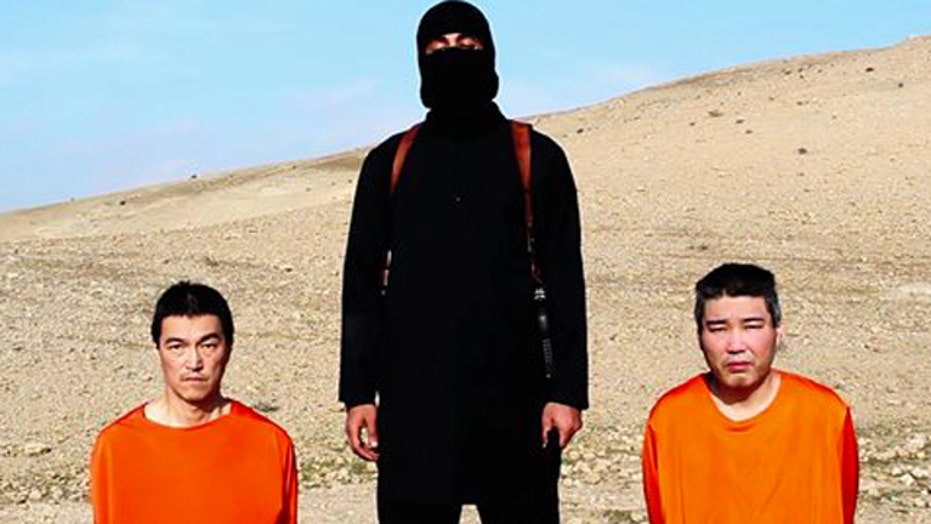 Video claims ISIS has killed one of two Japanese hostages

President Obama on Saturday condemned the apparent killing of a Japanese hostage by the Islamic State.

In a video released earlier in the day purportedly by Islamic State, the extremist group claims it killed one of it two Japanese hostages -- Haruna Yukawa, a 42-year-old adventurer fascinated by war

“The United States strongly condemns the brutal murder of Japanese citizen Haruna Yukawa by the terrorist group ISIL.” Obama said in a statement. “We stand shoulder to shoulder with our ally Japan. ...We will work together to bring the perpetrators of these murders to justice and will continue to take decisive action to degrade and ultimately defeat” Islamic State.

Japanese officials say they are investigating the video message.

The other Japanese hostage is 47-year-old journalist Kenji Goto.

A visibly shaken Prime Minister Shinzo Abe said after a late-night Cabinet meeting: "Such an act of terrorism is outrageous and impermissible and causes me nothing but strong indignation. I resolutely condemn this act."

The U.S. National Security Council said it has seen the video and that the intelligence community is working to confirm its authenticity.

“The United States strongly condemns (Islamic State’s) actions, and we call for the immediate release of all the remaining hostages,” said agency spokesman Patrick Ventrell.

The CIA also has confirmed it is aware of the video and is reviewing it.

The video message claims one hostage has been killed and demands a prisoner exchange for the other -- Goto for Sajida al-Rishawi, a suspected female militant imprisoned in Jordan.

The Associated Press could not verify the contents of the message, which varied greatly from previous videos released by Islamic State, which now holds a third of both Syria and Iraq.

Kyodo News agency said the video has been emailed to the wife of one of the hostages.

Islamic State had threatened on Tuesday to behead the hostages within 72 hours unless it received a $200 million ransom.

Japan have scrambled for a way to secure the release of Yukawa and Goto. Japanese diplomats had left Syria as the civil war there escalated, adding to the difficulty of contacting the militants holding the hostages.

Goto's mother made an appeal for his rescue.

"Time is running out. Please, Japanese government, save my son's life," said Junko Ishido. "My son is not an enemy of the Islamic State."

Ishido said she was astonished and angered to learn from her daughter-in-law that Goto had left for Syria less than two weeks after his child was born in October to try to rescue Yukawa.

Japanese officials have not directly said whether they are considering paying any ransom. Japan has joined other major industrial nations in the Group of Seven in opposing ransom payments. U.S. and British officials said they advised against paying.