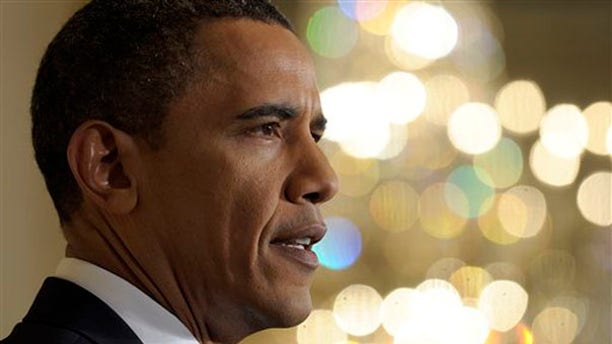 President Obama speaks at a press conference in the East Room of the White House May 27. (AP Photo)

President Obama is asking Americans to observe Memorial Day not just with barbecues and family time but by remembering and honoring the U.S. troops who have lost their lives in service.

Obama, who has sent thousands of troops into war in Afghanistan, used his weekly radio and Internet address Saturday to reflect on what the country owes its men and women who have died in uniform.

"On this day, we honor not just those who've worn this country's uniform, but the men and women who've died in its service; who've laid down their lives in defense of their fellow citizens; who've given their last full measure of devotion to protect the United States of America," Obama said. "These are the men and women I will be honoring this weekend."

Obama said fallen troops should be honored not just with words but with deeds, including ensuring that combat troops have the support they need in the field and that veterans get the assistance they need when they return home.

"In short, by serving all those who have ever worn the uniform of this country -- and their families -- as well as they have served us," the president said.

Obama said the U.S. owes its position as the most prosperous and powerful nation on earth to a commitment from the earliest years of the country "to serve, to fight and if necessary to die to preserve America and advance the ideals we cherish."

"It's what led a ragtag militia to face British soldiers at Lexington and Concord," Obama said. "It's what led young men, in a country divided half slave and half free, to take up arms to save our union. It's what led patriots in each generation to sacrifice their own lives to secure the life of our nation, from the trenches of World War I to the battles of World War II, from Inchon and Khe Sanh, from Mosul to Marjah."