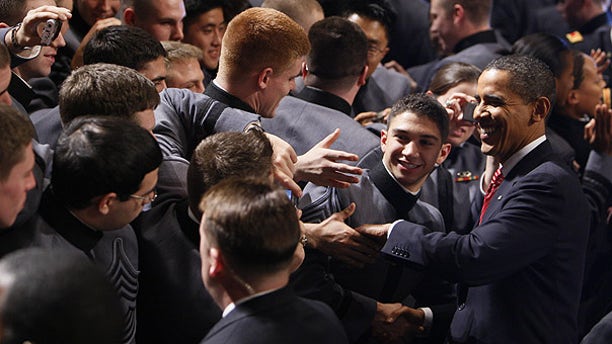 Dec. 1: President Barack Obama greets cadets after speaking about the war in Afghanistan at the U.S. Military Academy at West Point, N.Y. (AP)

President Obama, in a speech Tuesday that could define the rest of his presidency, laid out his plan to quickly send 30,000 more troops to Afghanistan to revive the struggling war effort while setting a preliminary timeline for withdrawal -- aiming to start handing over security roles to Afghan forces by July 2011.

"The status quo is unsustainable," Obama said as he outlined his case for a three-part strategy: more troops to bolster the military effort, a "civilian surge" to improve living conditions in the country and an increased focus on the United States' partnership with Pakistan.

The much-anticipated strategy decision is one of the most significant foreign policy moves of Obama's early presidency, and the White House is hoping the plan will achieve the tough task of appeasing the military, a war-weary public and the anti-war left.

"We did not ask for this fight," Obama said in a 35-minute prime-time speech he delivered from the U.S. Military Academy at West Point, N.Y. He referred to the terrorist attacks of Sept. 11, 2001, and traced the course of the Afghanistan and Iraq wars that followed before detailing his plan for the future.

Progress in Afghanistan has moved backwards, and huge challenges remain, Obama said, but declared that the war is not lost.

"The 30,000 additional troops that I am announcing tonight will deploy in the first part of 2010 -- the fastest pace possible -- so that they can target the insurgency and secure key population centers," Obama said.

"They will increase our ability to train competent Afghan security forces, and to partner with them so that more Afghans can get into the fight," he said. "And they will help create the conditions for the United States to transfer responsibility to the Afghans."

He argued for a preliminary timetable for withdrawal by suggesting it would bring a "sense of urgency" to the effort.

"It must be clear that Afghans will have to take responsibility for their security, and that America has no interest in fighting an endless war in Afghanistan," he said.

"We must keep the pressure on Al Qaeda, and to do that, we must increase the stability and capacity of our partners in the region," he added.

But Obama made it clear that the U.S. effort must be based on the performance of the Afghan government.

"The days of providing a blank check are over," he said. "President Karzai's inauguration speech sent the right message about moving in a new direction. And going forward, we will be clear about what we expect from those who receive our assistance."

During the 92-day review, Obama has been under intense pressure from all sides: conservatives have pressed him to hasten deliberations and heed the advice of his military commanders; anti-war Democrats and liberals have pleaded with him to wind down the war; political advisers, including Vice President Biden, have urged him to scale back the effort and focus on pursuing Al Qaeda in Pakistan.

In his speech Tuesday, Obama rejected criticism that his review has taken too long.

"As your commander-in-chief, I owe you a mission that is clearly defined, and worthy of your service," he said to the cadets in the audience, adding that "there has been no delay or denial of resources necessary for the conduct of the war" since none of the options considered called for sending troops sooner.

"Instead, the review has allowed me ask the hard questions, and to explore all of the different options along with my national security team, our military and civilian leadership in Afghanistan, and with our key partners," he said. "Given the stakes involved, I owed the American people - and our troops - no less."

Obama also dismissed criticism of his timeframe for a troop withdrawal and calls for an open-ended commitment to "a national building project of up to a decade."

"I reject this course because it sets goals that are beyond what we can achieve at a reasonable cost, and what we need to achieve to secure our interests," he said. "Furthermore, the absence of a timeframe for transition would deny us any sense of urgency in working with the Afghan government. It must be clear that Afghans will have to take responsibility for their security, and that America has no interest in fighting an endless war in Afghanistan."

The additional troops already has won praise from Republicans, who have tended to sided with Gen. Stanley McChrystal, the commander in Afghanistan who asked for 40,000 more troops.

McChrystal is expected to appear before Congress soon. In a statement from Kabul, he said: "The Afghanistan-Pakistan review led by the president has provided me with a clear military mission and the resources to accomplish our task."

Sen. Kit Bond, the top Republican on the Senate Intelligence Committee, said: "I am encouraged that the president has renewed his commitment to the strategy he outlined in March, a strategy that will allow our troops to return on success and put Afghanistan on the road to stability."

But the Missouri Republican and others have raised concerns about the president's timetable for withdrawal.

"We need a success strategy, not an exit strategy," he said. "When it comes to troops movements in Afghanistan, the president should listen to the military commanders on the ground, not arm-chair generals in Washington."

Rep. Dan Burton was even more dismissive of Obama's timetable.

"The one thing that you never do is telegraph your punch," said Burton, the top Republican on the House Foreign Affairs' Subcommittee on the Middle East and South Asia.

"I can't imagine why the president is saying in his speech tonight that he's going to start withdrawing our troops in July of 2011," he continued. "Even if he plans to do that, he shouldn't say it, because he is telling our enemies exactly what we're going to do and it's just wrong. Every military officer I've ever met will tell you the same thing."

Rep. David Obey, chairman of the House Appropriations Committee, reasserted his call for a surtax on the war.

"If this endeavor is to be pursued, we must have a renewed sense of shared sacrifice -- because right now only military families are paying the cost of this war," the Wisconsin Democrat said in a written statement. "A progressive war surtax is the fairest way to pay for it -- fairest to working class families and fairest to military families."