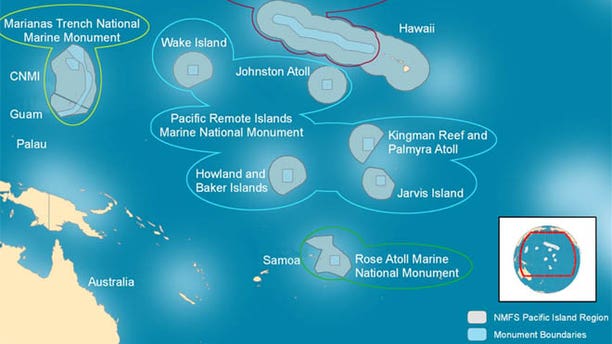 Shown here, center, is a map of the Pacific Remote Islands Marine National Monument, which the Obama administration is looking to significantly expand. (NOAA)

President Obama on Tuesday announced plans to create what could be the largest marine preserve in the world, an initiative that aims to protect "pristine" Pacific Ocean environments but could run into opposition from the fishing industry and lawmakers worried about the president's use of executive power.

The president announced his plans via video message at an oceans conference hosted by the State Department, and attended by actor Leonardo DiCaprio.

"We can protect our oceans for future generations," Obama said, vowing to use his "authority as president" to protect "some of our most precious marine landscapes."

The president did not get into detail in his video message, but officials say Obama is considering a massive expansion to the Pacific Remote Islands Marine National Monument, to protect it from drilling, fishing and other actions. The protected waters surround a group of mostly uninhabited islands, controlled by the U.S., that sit between Hawaii and American Samoa.

The Washington Post reported that Obama is looking at expanding the preserve, from almost 87,000 square miles to nearly 782,000 square miles. The monument, created by President George W. Bush just before he left office in 2009, includes seven islands.

The Post reports that the designation is expected to face opposition from the U.S. tuna fleet, which operates in the region. Republicans in Congress have called the proposal another attempt by the administration to test the limits of executive power.

"For years the Obama Administration has threatened to impose ocean zoning to shut down our oceans, and today the president is making good on that threat," House Natural Resources Committee Chairman Doc Hastings, R-Wash., said in a statement on Tuesday. "This is yet another example of how an imperial president is intent on taking unilateral action, behind closed doors, to impose new regulations and layers of restrictive red-tape."

Hastings said the announcement "will likely make the U.S. tuna fleet even less viable, meaning in the not-too-distant future all of America's tuna will be caught by foreign vessels."

But the White House hasn't settled on the final boundaries for the preserve. The administration said it planned to solicit input from fishermen, scientists, politicians, experts in conservation and others before the new protections take effect.

The White House's Council on Environmental Quality said the waters in the south-central Pacific Ocean contain "some of the most pristine tropical marine environments in the world."

"These tropical coral reefs and associated marine ecosystems are also among the most vulnerable areas to the impacts of climate change and ocean acidification," the White House said in a statement.

Obama is also vowing to create a government program to combat black market fishing and seafood fraud, in which seafood products are mislabeled to hide their origin. The White House said 20 percent of the wild marine fish caught each year are part of the black market, at a cost of $23 billion to the legitimate fishing industry.

The plan reportedly is scheduled to go into effect later this year after a comment period.