A New York parent is fighting back against Democratic Mayor Bill de Blasio’s plan to phase out the Gifted and Talented program at public elementary schools in the city.

"The New York City gifted and talented program needs improvement and certainly needs to be expanded into all neighborhoods, and many neighborhoods don't even have one of these programs. But to take it away, especially for families that are depending on the opportunity this year is just really abrupt and destructive."

Chu comments come as critics of the Gifted and Talented program called it racist because White and Asian students made up the majority of enrollees. 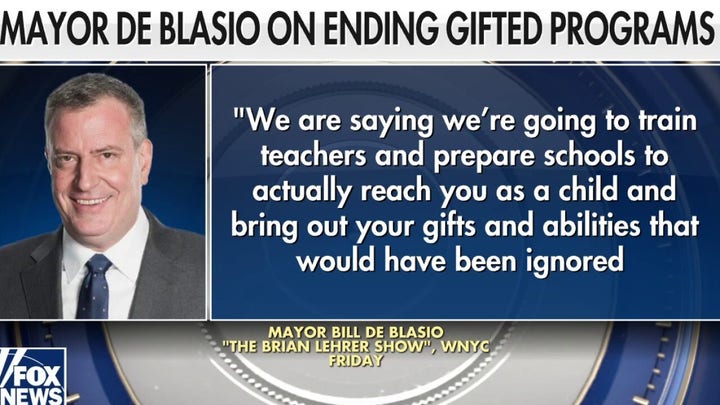 "We are saying we’re going to train teachers and prepare schools to actually reach you as a child and bring out your gifts and abilities that would have been ignored if you were not accepted into one of those very small, very exclusive, Gifted and Talented programs previously," de Blasio said Friday on WNYC.

"It is a fool's errand to think that…training teachers to be able to differentiate for the highest level of learners in classrooms of 25-32 is really going to meet and support these accelerate learners’ needs," Chu added.

The Gifted and Talented program is being replaced by Brilliant NYC, a program offering students aged 8 and up chances for accelerated learning — while staying in their regular classrooms with other pupils.

"These are not privileged, wealthy parents. These are working parents who want to challenge their kids," Kim told New York Post. "How is putting kids out of gifted and talented programs going to solve racial segregation? Punishing kids who want to excel is wrong."

Both of de Blasio’s children, now in their mid-20s, attended M.S. 51 in Brooklyn’s wealthy Park Slope neighborhood. The school bills itself as a "gifted and talented" middle school.

"I’m going to reserve my right, if I’m fortunate to be mayor, to determine how we handle Gifted and Talented, to deal with the segregation in our schools … and ensure that we create a system where every child reaches his or her full potential," he said on Fox 5’s "Good Day New York" Tuesday.

Chu continued to say her group PLACE NYC, which advocates for high quality education in New York City public schools, is attempting to advocate for the expansion of Gifted and Talented programs, not cancel them.