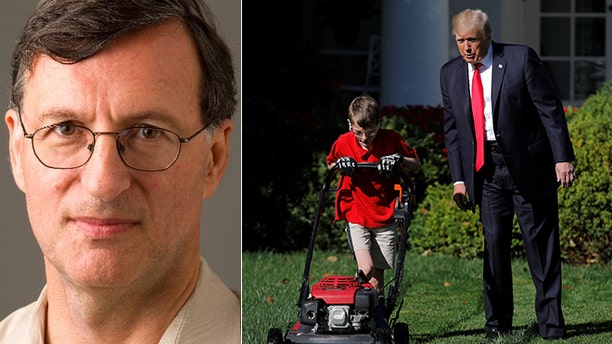 A former New York Times labor reporter has been slammed on social media for a snarky tweet hitting the White House for letting an 11-year-old boy mow the Rose Garden lawn last week.

Steven Greenhouse, who worked for the Times for 31 years and still writes for the paper on occasion, took issue with the feel-good story of the boy, Frank Giaccio, of Falls Church, Va., who showed up at the White House Friday to cut the grass at the invitation of President Trump.

“Not sending a great signal on child labor, minimum wage & occupational safety >> Trump White House lets a 10-year-old volunteer mow its lawn,” Greenhouse, who covered unions for much of his time at the newspaper, tweeted.

Others were just as critical.

“The sanctimonious and humorless finger-wagging of nanny state progressivism in one tweet,” conservative commentator and journalist Bill Kristol tweeted.

Trump accepted the Virginia boy’s offer after he wrote to the president saying it would be his “honor to mow the White House lawn.” Frank, who was 10 when he wrote the letter but has since turned 11, also enclosed a menu of his landscaping services, including weed-whacking.

Trump spokeswoman Sarah Sanders said at the White House press briefing Friday that it was an “honor” to host Frank.

“The president has always loved go-getters like Frank,” she said.

After his initial tweet, Greenhouse engaged in a spirited back and forth with other Twitter users who disagreed with his view and let him have it. He tweeted later, “What this kid wants to do is noble, but sorry, I'm mindful of problems--I've written lots about child labor & kids being hurt by machinery.”