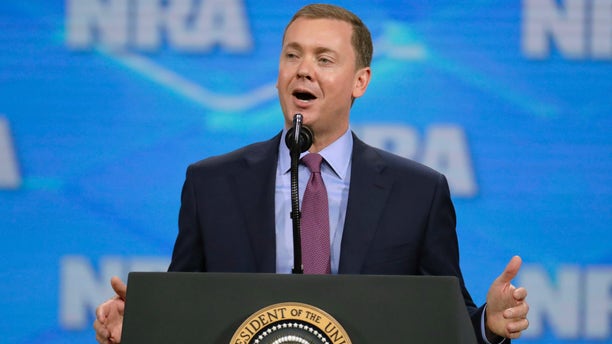 The National Rifle Association’s top lobbyist, Chris Cox, resigned Wednesday, the latest development in a dizzying array of in-fighting within the gun lobbying group in recent months that has ensnared even its most ardent loyalists. (AP Photo/Michael Conroy, File)

The lobbyist, Chris Cox, resigned just about a week after the NRA put him on administrative leave, claiming he was part of a failed attempt to extort LaPierre and push him out.

Cox played his usual prominent role at the NRA’s annual meetings and there was little public evidence that he and LaPierre or the NRA’s Board of Directors were at odds.

His resignation was confirmed by NRA spokesman Andrew Arulanandam. No other comment was immediately made about his departure.

Cox had been the executive director of NRA’s lobbying arm, the Institute for Legislative Action, since 2002. He was credited with leading efforts to allow a decadelong ban on “assault weapons” to expire in 2004, an achievement that allowed the gun industry to resume selling what the industry calls “modern sporting rifles” and critics claim are used too often in mass shootings.

When he was suspended, Cox said in a statement that allegations he had been part of a group seeking LaPierre’s ouster were “offensive and patently false. For 24 years I have been a loyal and effective leader in this organization.”

Cox’s resignation came within hours of the NRA officially severing ties with Ackerman McQueen, the Oklahoma-based public relations firm with which it’s been embroiled in a legal tangle over expenditures.

The NRA has paid Ackerman McQueen tens of millions of dollars in the decades since they partnered up to shape the group's messaging.

A prominent part of the NRA’s public relations has been NRATV, featuring hosts addressing everything from immigration to gun rights. In a statement from LaPierre posted on the NRA website, the gun lobbying group said it would no longer be airing live programming on NRATV, and would be evaluating that operation's future.