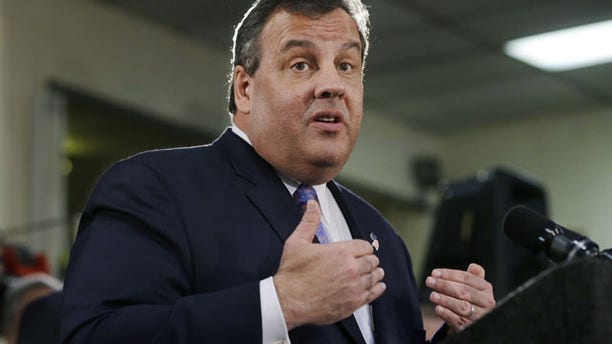 FILE - In this Feb. 4, 2014, file photo, New Jersey Gov. Chris Christie speaks in Keansburg, N.J., at a gathering of residents whose homes in Keansburg, were heavily damaged by Superstorm Sandy. (AP)

Recipients in the third round of subpoenas include executives at the Port Authority of New York and New Jersey, the agency that runs the bridge; a failed Supreme Court nominee who Christie later named to the bridge agency; and the state police aviation unit, which could provide information about Christie's helicopter travel during the time the lanes were blocked for four days in September.

Christie's office acknowledged Monday that the governor, who travels frequently by helicopter, flew to the state capital after attending a 9/11 anniversary ceremony in New York City. He arrived at the event via ferry, said his spokesman, Colin Reed. The governor's office said Christie never shared a helicopter with David Wildstein, his former No. 2 man at the Port Authority, who oversaw the lane closings and has since resigned.

A photograph taken at the event — held on the third day the lanes were blocked — shows Christie walking with Wildstein and other close allies at the authority.

Two traffic lanes leading to the bridge were shut starting Sept. 9, creating gridlock in Fort Lee, the town at the base of the bridge. The Legislature is investigating whether the closings were engineered to send a message to the community's Democratic mayor, perhaps for not endorsing the Republican governor's re-election bid.

Christie has maintained he was unaware of the lane closing operation until after it ended. He added last week that even if he was told or read about traffic jams while they were happening, the information didn't register as being unusual.

Wildstein, who is seeking immunity from prosecution, recently claimed through his lawyer "evidence exists" that Christie knew of the lane closings while they were happening. He did not identify the evidence.

The panel deemed its request for emails, text messages and electronic correspondence necessary and authorized its lawyer to set a new date for compliance after agreeing to minor modifications in the two subpoenas.

Four Republicans on the panel abstained, saying they were not given ample time to review the complex Fifth Amendment arguments.

Lawyers for the two said the subpoenas were overly broad and interfered with their rights against self-incrimination.

Another key figure in the case, Wildstein, turned over documents but invoked his Fifth Amendment right against self-incrimination and declined to testify under oath. The committee has referred a contempt charge to a county prosecutor for action.

Christie's popularity has taken a hit in public opinion polls since the lane closing scandal broke open last month with the release of a subpoenaed email exchange in which Kelly tells Wildstein, "time for some traffic problems in Fort Lee," and Wildstein replies, "got it."

The panel's latest actions follow last week's deadline for 20 people and organizations close to Christie to return subpoenaed documents. All but a few have sought more time, and some are producing documents on a rolling basis. None of those documents have been released publicly so far.

"Ultimately, (that is) what the inquiry of the committee is — who knew what when, and who authorized this, and why," committee co-chairman John Wisniewski said Monday.

The U.S. attorney's office is conducting a parallel criminal investigation.

The most recent subpoenas, which could take a couple of days before they are all served, include new members of Christie's circle and Port Authority employees, as well some subpoenas seeking new information from people and organizations served previously.

One new recipient is Phillip Kwon, a former first assistant attorney general whose nomination to the state Supreme Court was rejected by the Democrat-led judiciary committee after a bitter partisan fight. Christie subsequently appointed Kwon deputy general counsel at the Port Authority at an annual salary of $165,400.

The Wall Street Journal reported that Kwon met with another Christie ally at the Port Authority, former Deputy Executive Director Bill Baroni, before his now-discredited testimony that the lanes were closed for a traffic study. Baroni, who has since resigned and was subsequently subpoenaed for documents, testified before a legislative panel voluntarily and was not under oath.

As the troubles for Christie's administration deepened, other allegations have attracted the attention of federal authorities.

Officials in Hoboken said they will not grant interviews to a lawyer for Christie or turn over documents regarding the mayor's claim.

Christie attorney Randy Mastro requested all the documents that Hoboken officials have provided to the U.S. attorney's office in the case. But Zimmer's lawyer questioned whether it's appropriate for the governor's office "to be investigating itself."

The Record newspaper first reported the request and the response.