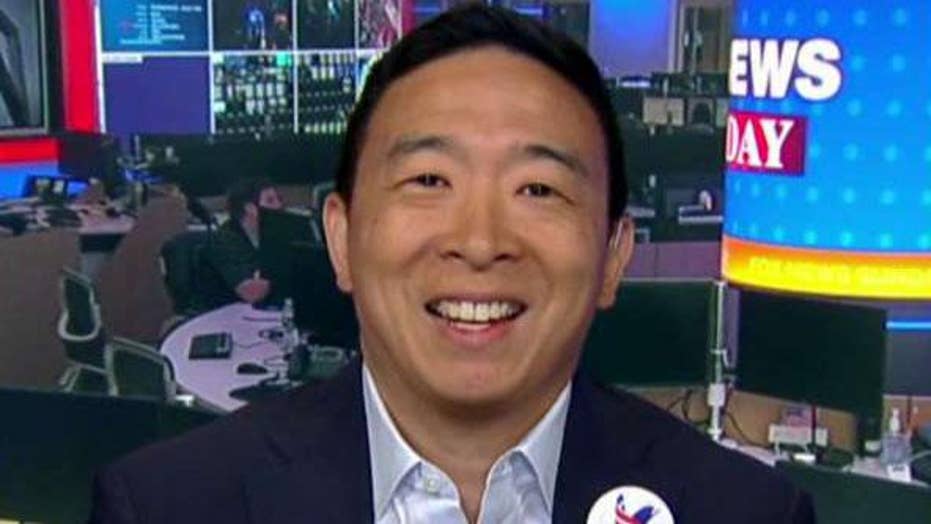 DES MOINES – Andrew Yang is taking aim at some of his competitors for the Democratic presidential nomination.

In a short interview with Fox News on Friday after speaking at the Des Moines Register’s "soapbox" at the Iowa State Fair – a tradition for White House hopefuls – Yang said his universal basic income proposal is “twice as good” as a similar plan by top-tier primary contender Sen. Kamala Harris of California

The New York City entrepreneur – once the longest of long-shots for the White House – has surged in polling and in the number of contributors to his campaign in recent months. On Thursday, he became the ninth candidate to reach the thresholds needed to qualify for the third and four rounds of Democratic presidential primary debates, which will be held next month and in October.

One of the reasons for the first-time candidate’s newfound popularity is his so-called "Freedom Dividend," which would pay each adult American $1,000 a month and would be paid for by a national value-added tax. The plan, which he introduced when he launched his presidential campaign a year and a half ago, has been grabbing plenty of buzz of late.

Last year Harris introduced a bill in the Senate called the "LIFT the Middle Class Act" to address the rising cost of living for middle class and working families. While it’s not a universal basic income, it would send up to $500 each month to working families through tax credits. While she introduced the legislation before she announced her candidacy at the beginning of this year, Harris has been highlighting her proposal on the presidential campaign trail.

Speaking in Iowa on Thursday to a crowd at an Asian and Latino PAC event, Biden – discussing how to challenge lower-income students – said “poor kids are just as bright and talented as white kids” before quickly adding “wealthy kids, black kids, Asian kids.”

The gaffe quickly grabbed plenty of attention on social media.

He added that Biden obviously misspoke but emphasized that it was "poor choice of words.”

Yang also weighed in on the controversial tweet by Rep. Joaquin Castro of Texas – twin brother of former Housing and Urban Development secretary and Democratic presidential candidate Julian Castro – which included the names of 44 people from San Antonio who had made the maximum possible contribution to President Trump’s reelection campaign this year.

In his tweet -- which only included publicly available donor information – Castro said: “Sad to see so many San Antonians as 2019 maximum donors to Donald Trump…Their contributions are fueling a campaign of hate that labels Hispanic immigrants as ‘invaders.’”

The post quickly drew swift backlash, mainly from conservatives, who emphasized that the congressman was targeting private citizens for political purposes.

Castro is the chairman of his brother’s presidential campaign.

Taking questions from reporters earlier Friday at the Iowa State Fair, Julian Castro told Fox News “it is not OK for anybody to harass anybody else. It doesn’t matter where somebody is coming from, from the right or the left. It’s not OK for people to harass other people.”

Defending his brother, Castro highlighted “my brother put out a list of names of people who had maxed out to the Trump campaign. That is public information. That kind of information is put out all the time. And for anybody to pretend or suggest that it’s not, that’s just untrue.”

Many of the lower-tier candidates who are struggling to hit thresholds to qualify for the upcoming debates have thrashed the DNC and the criteria.

But Yang told reporters “what I love about the rules is that they're transparent. Everyone can see what they are. And then we all have to hit certain benchmarks. And so to me obviously I'm a little bit biased because we just made the debates. So I think the rules are great.”

And taking aim at some of the lower-tier contenders, Yang added “anyone who's complaining about the rules, they've been out there for all of us to see for months.”