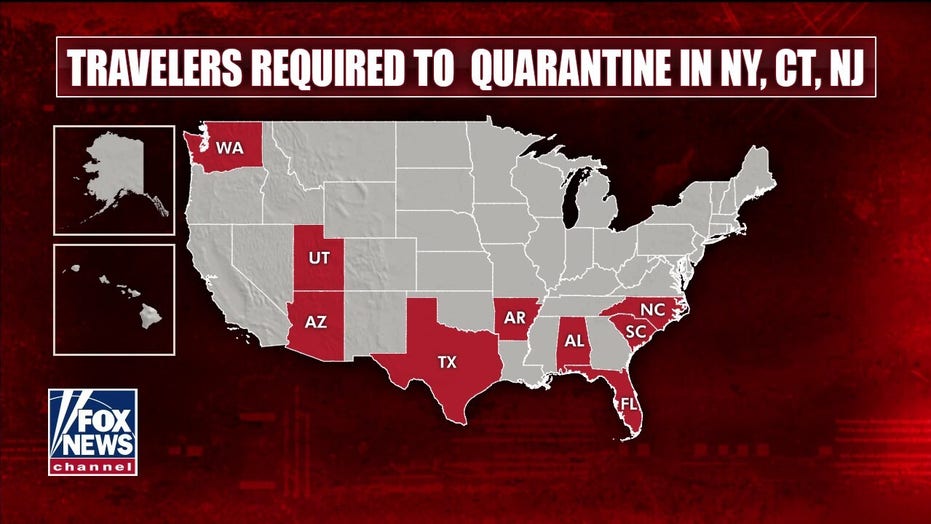 NY, NJ, CT order travelers to quarantine, is it warranted?

New York Gov. Andrew Cuomo and Connecticut Gov. Ned Lamont on Tuesday announced that individuals traveling to their states from Minnesota, Ohio, New Mexico and Wisconsin will be required to quarantine for 14 days — as the four states experience a recent surge in coronavirus cases.

NY, CT, NJ GOVERNORS IMPOSE 14-DAY QUARANTINE FOR THOSE VISITING FROM OUT OF STATE

It is unclear if Murphy added the new states to the list for individuals traveling to New Jersey.

The governors also announced Tuesday that Delaware, which was added to the list last week, has been removed.

"New Yorkers showed incredible courage and resiliency throughout this pandemic, and nowhere is their work more evident than in the numbers we release every day, including in New York City, once a global hotspot,” Cuomo said Tuesday. "However, the success of our efforts depends on citizens' willingness to comply with state guidance, socially distance, wear masks and wash their hands, and rising cases around the country continue to threaten our progress, which is why four new states have been added to New York's travel advisory.”

Meanwhile, Cuomo announced this week that enforcement teams would be “stationed at airports statewide to meet arriving aircrafts at gates and greet disembarking passengers to request proof of completion of the State Department of Health traveler form, which is being distributed to passengers by airlines prior to, and upon boarding or disembarking flights to New York state."

Lamont announced this week that similar teams would be at airports to monitor and help individuals “self-certify.” For now, the policy will only apply to those flying in Connecticut.