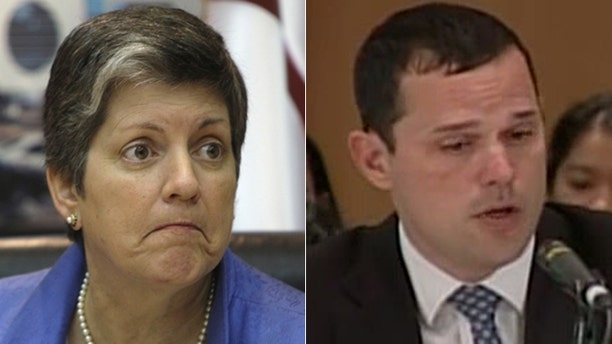 Critics suspect the elevation of John Sandweg (r.) to acting director of ICE has more to do with his closeness to outgoing Secretary of Homeland Security Janet Napolitano (l.) than his law enforcement credentials. (AP, C-Span)

The acting director of Immigration and Customs Enforcement is a former criminal defense attorney who represented accused and convicted murderers, sex offenders and pedophiles and fought for the release of violent convicted offenders -- a background some critics say makes him a less than ideal choice to lead the federal government's second-largest law enforcement agency.

John Sandweg, 38, who was recently named acting director of ICE, worked between 2002 and 2009 defending violent criminals in Arizona, and helping then-governor and current Secretary of Homeland Security Janet Napolitano raise campaign funds. Critics questioned Sandweg's credentials, with one calling him “in no way qualified” and his appointment the latest example of Napolitano's "blatant politicization" of the agency.

"I am deeply disappointed by this appointment and believe it is disrespectful to the thousands of dedicated professionals at ICE who are working tirelessly to enforce our laws and provide for our security," said Rep. John Carter, R-Texas, who chairs the House Homeland Security Appropriations Subcommittee. "I urge the administration to re-think this appointment and promptly appoint a qualified, confirmable applicant for this essential post."

A former administration official said news of Sandweg’s installation as acting director was met with disgust and disbelief within parts of DHS.

“He has zero law enforcement experience and he [is running] our country’s second-largest law enforcement agency -- and that’s a real job, it’s not a figure-head position,” the former official said.

Last week, Sandweg took over as acting director of ICE after director John Morton stepped down. He is believed by some to have the inside track for the nomination for the permanent position. Napolitano has announced her own resignation and has already been picked to head the 10-campus University of California system.

In response to a request for comment on Sandweg's appointment, DHS provided an internal message Napolitano sent to senior DHS staff on Aug. 2, in which the outgoing secretary praised Sandweg.

"Since joining DHS in 2009, John has served as one of my closest advisors on matters related to immigration enforcement, border security, and federal law enforcement," Napolitano wrote. "John brings significant experience in the development and implementation of our border security and immigration enforcement strategies and will continue to build on our common sense approach that prioritizes public safety and national security."

ICE is the main investigative arm of the Department of Homeland Security and is responsible for enforcement of immigration law. As acting director, Sandweg oversees more than 20,000 employees in offices in all 50 states and 47 foreign countries. David Aguilar, who recently retired as deputy commissioner of U.S. Customs and Border Protection, told FoxNews.com Sandweg is more than up to the job.

“I think he’s extremely qualified to serve as the acting director of ICE and that’s in my opinion, that’s the opinion of a 35-year cop,” said Aguilar, who says he worked closely with Sandweg over the last five years on issues specific to immigration and the border.

As for Sandweg’s history as a criminal defense attorney, Aguilar said: “Frankly, somebody’s got to do it, and he did it well from what I understand. I actually believe that will be of use for him, having seen and experienced both sides of the law enforcement judicial system.”

A review by FoxNews.com of Sandweg’s previous career as an Arizona lawyer showed a history of fighting for the release of violent convicted criminals, including one who pleaded guilty to attempting to blow up an airplane, as well as multiple sex offenders.

Sandweg also volunteered as a lawyer with the Arizona Justice Project to examine and overturn convictions of murderers and other violent convicted criminals.

Other clients, according to court and other public records, included a man convicted of strangling his ex-girlfriend in front of her 4-year-old child, members of an identity theft conspiracy that used stolen Social Security numbers to obtain fraudulent driver’s licenses; numerous violent felons who had violated their parole; people convicted of possessing child pornography and a man accused of nearly a dozen counts of sexual assault of a minor.

Sandweg argued in Arizona Supreme Court against a then newly-passed law that allowed certain accused violent offenders, including sex offenders, to be held without bail during trial, saying his client -- an accused pedophile charged with having sex with a minor under the age of 15 -- should be released.

In 2008, while representing on appeal a juvenile charged with 16 counts of sex-related crimes, Sandweg and his co-counsels argued that "the trial court erred in concluding consent was not a valid defense to sexual abuse of a minor," according to memorandum decision issued by the court of appeals in this case.

Another client was charged with wire fraud, mail fraud, money laundering and “Intent to deceive for the purpose of concealing his true identity.”

Sandweg was also active in politics while he worked as defense attorney. A biography that once appeared on the website of Quarles & Brady, the Arizona law firm where he previously worked, described him as “Former Chairman of Democratic Precinct Committee, District 11” and “Former Director of Business Leaders for Napolitano.” The archived website for District 11 from 2007 lists Sandweg a chair of the finance committee.

The law firm bio also noted he helped defend an unidentified political candidate against voter fraud allegations, and, in a 2008 post on ferrarichat.com, Sandweg was described as “the official traffic attorney of the Scottsdale Exotic Car Club” by someone who praised his efforts in fighting a speeding ticket.

Sandweg has a long history with Napolitano, who brought him to Washington in 2009, when she left the governor's mansion in Arizona to lead the Department of Homeland Security, appointing him chief of staff in the DHS Office of General Counsel.

While at DHS, Sandweg attended immigration policy events, including the 2011 National Immigration Center’s Low-Income Immigrants’ Rights Conference, where he sat on a panel called “Hoping for Change: Administrative Relief under the Obama Administration.”

“Provides an overview of the tools available to the Obama administration to grant relief to undocumented immigrants," read a pamphlet describing the panel discussion. "Covers the various campaigns to seek administrative changes to the federal immigration system, including efforts to de-link the criminal justice and immigration enforcement systems, secure deferred action for DREAM-eligible youth, and allow for adjustment of status of individuals who qualify for family visas. Participants strategize about the best opportunities for seeking administrative relief in 2012.”

Some on the Hill have accused Sandweg of playing a lead role in what they claim is a pattern at DHS of obstructing Freedom of Information Act requests involving spending from the 2009 stimulus plan.

According to a scathing 2011 report prepared for Rep. Darrell Issa, R-Calif., the chairman of the House Committee on Oversight and Government Reform, documents showed Sandweg -- then senior adviser to Napolitano and the top political appointee in her inner circle -- was “responsible for halting releases on behalf of the  [Office of the General Counsel] and the Office of the Secretary.”

“The Secretary’s political staff failed to recognize that they are servants of the public,” the report concluded. “They are entrusted to place the interests of the American people ahead of their own. In the case of FOIA, political appointees were more concerned with protecting themselves from embarrassment than running an effective disclosure program.”

The report continues on to blast the group of political appointees involved, saying, “The extent of the mismanagement of the FOIA function at DHS calls into question the competence and commitment of high-level staff charged with protecting the homeland from serious threats.”