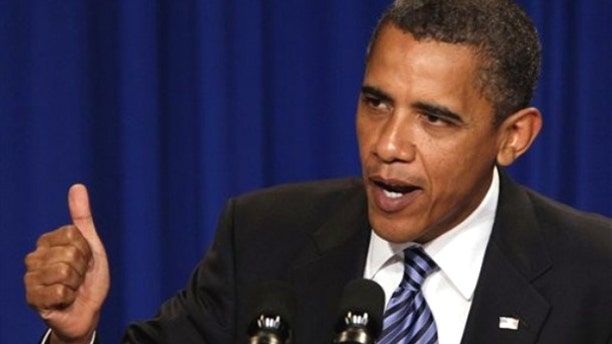 Aug. 18: President Barack Obama gestures as he speaks during a reception at the Columbus Anthenaem in Columbus, Ohio. A recent poll shows an increase in the number of Americans who incorrectly believe that Obama is a Muslim. (AP)

A new survey reports a sharp increase in the number of Americans who, incorrectly, say President Obama is a Muslim. The increase has occurred over the last couple of years, and the poll was taken before the president stepped into the fray of the Ground Zero mosque controversy.

The findings are part of the "Religion, Politics and the President" poll conducted by the Pew Forum on Religion and Public Life early this month. It also explores Americans' attitudes toward religion's impact on society and voting preferences in the upcoming 2010 congressional races.

According to the survey, nearly one in five Americans --18 percent -- say Obama is a Muslim, up from 11 percent in 2009. Obama is a Christian, but the number of people say Christian when asked his religion has gone down sharply, from 51 percent in 2008 to 34 percent today. And 43 percent say they don't know what religion the president follows.

Alan Cooperman, associate director of research for the Pew Forum, says, "I think overall the picture that we see is of uncertainty and confusion about the president and religion."

Cooperman also says, "When we simply ask people, 'Do you happen to know what is Barack Obama's religion?' it is only one-third of Americans who say he is a Christian. The largest single percentage, almost half of Americans, don't know what religion he is."

The White House issued a statement Thursday after the Pew Poll was released.

"President Obama is a committed Christian, and his faith is an important part of his daily life," the statement read. "He prays every day, he seeks a small circle of Christian pastors to give him spiritual advice and counseling, he even receives a daily devotional that he uses each morning. The president's Christian faith is a part of who he is, but not a part of what the public or the media is focused on everyday.

"The poll's findings are not surprising given the scope of the issues we are focused on -- a recovering economy, bringing troops home from Iraq, putting health care and financial reform implementation in place. The president's strong Christian faith is what guides him through these challenges but he doesn’t wear it on his sleeve."

The survey found there was a clear link between how people viewed the president's faith and how they viewed his political performance. Those who view Obama as Christian tended to have a very positive assessment of his job performance. Those who don't know his faith are split in their job approval ratings. And those who say the president is a Muslim give him a negative job approval rating.

But Dr. Clyde Wilcox, professor of government at Georgetown University, says what is driving the president's sinking approval ratings is the economy. "If the economy were resurrected from the dead like Lazarus, then you would see less of this," he said.

Wilcox added that because of the viral nature of the Internet, any ideas, wrong or right, about a politician's beliefs, can grow exponentially. Case in point: Sarah Palin's conservative evangelical beliefs became raw meat for liberals during her 2008 vice presidential campaign.

Two years later, a growing number of people see Obama as a Muslim.

"It's a troubling thing," Wilcox said. "I think it would be good for all of us to stop invading the president's spiritual privacy. We don't know what anyone's true faith is. It doesn't tell us about what their true core values are."

Cooperman speculates that people have more uncertainty about the president's faith because he's been less upfront about how he practices his religion. He doesn't attend church regularly, and there are no photos of him leaving a house of worship on Sunday morning with a Bible in hand.

"We really haven't heard a lot, he's not very public since he took office. The last time was the issue over Jeremiah Wright," Cooperman said.

Wright, the pastor of Trinity United Church of Christ in Chicago, became a lightning rod for controversy in the 2008 presidential campaign. Obama, a longtime member of his church, distanced himself from Wright after snippets of sermon tapes emerged of the pastor saying inflammatory comments about America.

For Democrats, 2008 was a banner year. Their push to capture religious voters helped them appear more faith friendly with 38 percent of the people polled. But that number has slid to 26 percent today, back to where it was in 2006.

What this bodes for the 2010 midterm elections is hard to predict, Cooperman says. Most Americans, 61 percent, still think it's important for members of Congress to have strong religious beliefs, as compared to 34 percent who don't. Reading the tea leaves from the 2008 results can help. Exit polling data from that presidential election shows that the second biggest predictor for how someone will vote is religion. The first is race.