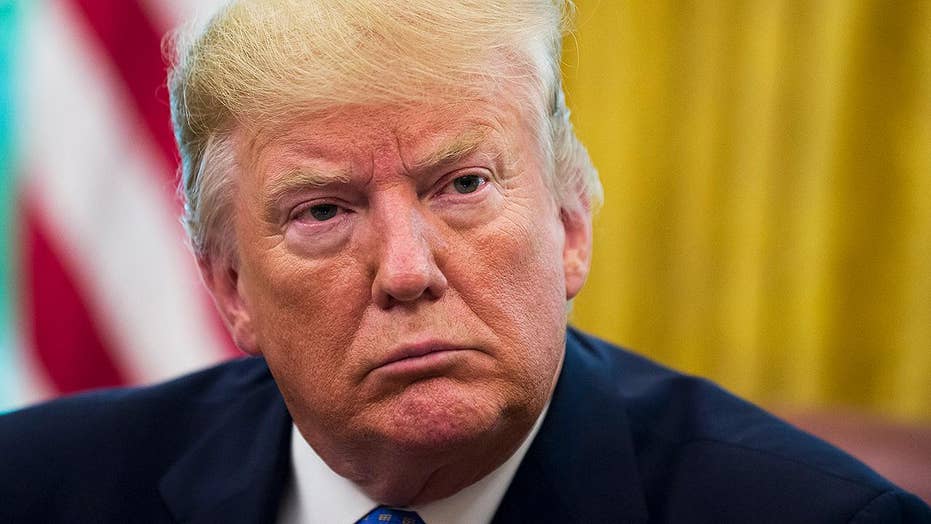 The president expresses frustration in an interview with Fox Business Network after House Democrats announce Special Counsel Robert Mueller will testify under subpoena on the Russia report; Kevin Corke reports from the White House.

Key Democratic lawmakers who triumphantly announced that Robert Mueller will testify under subpoena next month about his report on alleged Russian collusion may have played right into Republican hands, several legal and political experts told Fox News.

And for his part, President Trump lamented that the testimony is yet another chapter in the Russia probe saga.

The president reiterated that the investigation itself did not find collusion, while complaining that Mueller and his team were biased against him.

With the former special counsel set to testify on July 17 to the House Judiciary and Intelligence committees, both controlled by Democrats, Trump’s complaints could well be pursued and amplified by his GOP allies on Capitol Hill.

His most vocal critics hope to have the legendary lawman spell out the commander-in-chief’s misdeeds in sound bites that could fuel an impeachment drive. But given that Mueller ultimately found no evidence the Trump campaign colluded with Russia, and his pledge to not deviate from the 448-page report made public in April, the hearing may backfire.

"The bottom line is, after all of your looking and all the time you had and all the money you spent, did Trump collude with the Russians? No - Do you stand by your report? - Yes," Sen. Lindsey Graham, R-S.C., told Fox News Channel’s Sean Hannity late Monday. "It is 'case-closed' for me. They can do anything they want to in the House, and I think it will blow up in their face.”

In his report, Mueller declined to reach a conclusion as to whether Trump obstructed justice during the investigation. During a subsequent news conference, he seemed to base that decision on a longstanding Justice Department policy that a sitting president cannot be indicted, but he later walked that claim back. Although Attorney General William Barr, together with then-Deputy Attorney General Rod Rosenstein concluded that the report did not demonstrate Trump obstructed justice, critics of Trump believe the report is replete with examples of obstruction that could propel impeachment and even post-presidency prosecution.

Republicans on the two panels will get their chance to query Mueller about the dubious basis for federal surveillance warrants used to spy on Trump associates, what initially prompted the FBI probe that preceded Mueller’s investigation and, perhaps the biggest question of all: At what point during his nearly-two year probe did Mueller determine Trump did not collude with Russians.

"He can't refuse to answer questions about the FISA application," Harvard Law Professor Alan Dershowitz told Fox News Channel’s Laura Ingraham, referring to a request by the FBI to surveil a member of the 2016 Trump campaign under the Foreign Intelligence Surveillance Act (FISA).

Dershowitz believes the Democrats may have overreached

Both committees were taken over by Democrats when the party retook the House majority in the 2018 midterm elections. They are chaired by two of Trump’s biggest adversaries, Rep. Jerrold Nadler, D-N.Y., of the Judiciary Committee and Rep. Adam Schiff, D-Calif., of the Intelligence Committee. But both are stacked with able Republicans, including former federal prosecutor and Texas Rep. John Ratcliffe, Rep. Devin Nunes, of California, who previously chaired the Intel Committee and who, as a member of the “Gang of Eight” has seen key evidence still not made public.

Rep. Devin Nunes, R-Calif., is the ranking member on the House Intel committee and knows the case very well

Ratcliff is a member of both committees, and is joined on Judiciary by Trump supporters Rep. Louie Gohmert, a former Texas judge; Rep. Jim Jordan, R-Ohio, and Rep. Doug Collins, R-Ga., who has used his position to release closed-door testimony of several witnesses from the FBI and Department of Justice.

Schiff told MSNBC’s Rachel Maddow that the subpoena was necessary because Mueller “did not want to testify.”

"Nonetheless, they will respect the subpoena,” Schiff said. “He will appear. He'll be testifying before our committee in open session. Each of our members will have an opportunity to ask questions of the special counsel. And the American people get a chance to hear directly from him and have their questions answered. So I think it's a good result."

"I think that the price that this testimony will cost the Democrats will be grievous to them," Rivera said. "They will rue the day that Nadler and Schiff let their ambition get ahead of their common sense, their political science, and drag this man back into center stage of the American public."