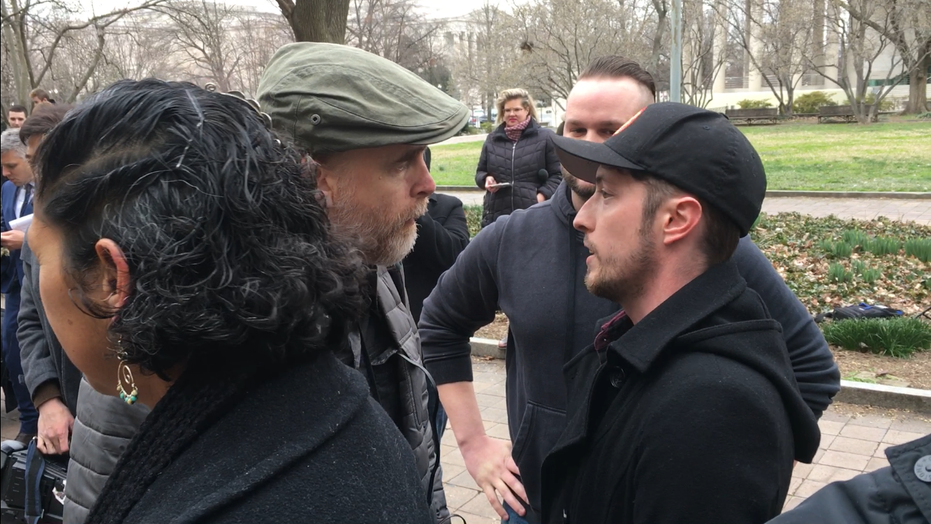 Former Trump adviser Roger Stone was sentenced to three years for lying and witness tampering as the case roils the Department of Justice; reaction and analysis from criminal defense attorney Philip Holloway on ‘The Daily Briefing.’

As Trump associate Roger Stone was preparing to exit the D.C. federal courthouse after receiving a 40-month sentence for witness tampering and other charges, a fracas broke out on the other side of the building among pro-Stone forces, anti-Stone protesters and members of the media.

After it became clear that Stone was likely to leave on the east side of the William B. Bryant Courthouse, the home of the U.S. District Court of the District of Columbia, an Infowars personality stepped into the middle of the media stakeout at the west side of the building and started yelling about the Stone verdict, which he said was a "threat to America."

This led anti-Stone protesters to chant "lies, lies" and hurl other insults at him, with some photographers, who had been waiting for hours in the cold at the stakeout, joining in the jeers. Amid the melee, one of the Stone-aligned protesters insulted the appearance of an anti-Stone demonstrator, leading another anti-Stone protester to confront him for several tense moments. The interaction did not become physical.

The scene was just as chaotic moments later on the east side of the courthouse as Stone left the building and got into his car. Anti-Stone protesters chanted "lock him up" as Stone supporters called out various other chants. Stone didn't say anything as he left the building, wearing a black hat, black suit, blue shirt and gray tie.

Back on the west side of the building, Stone backers unfurled a giant banner in the middle of the media scrum with the hashtag "#PardonRogerStone" and a likeness of Stone throwing up double-peace signs and wearing dark sunglasses.

In other odd occurrences on a big day for what has been a bizarre case, two trucks toting mobile billboards circled the courthouse for hours. One read "Epstein did not kill himself" and the other featured a photo of beleaguered U.S. Attorney General Bill Barr with the caption, "Have you forgotten your oath?"

Additionally, a small group of protesters told Fox News that they accused Stone of betraying America when he entered the courthouse at approximately 9:15 a.m. Stone, according to the protesters, had a response ready.

"We told him he was a traitor. He said ‘God bless you,’ I said ‘I don’t believe you,'" a protester said.

The protesters also predicted that Trump would pardon Stone, a possible presidential action that's been rumored for months, and speculation has only increased after Trump's busy day Tuesday granting clemency to 11 different individuals.

"I hope he’s locked up for at least nine years,” one protester said. “But he won’t be. Even if they lock him up, Trump’s gonna pardon him."

In response, another protester mentioned Trump's Tuesday commutation for former Illinois Gov. Rod Blagojevich, saying Trump issued the decision because "he looks in the mirror and sees" Blagojevich, who was convicted of attempting to sell former President Barack Obama's vacant Senate seat after he was elected president.

Stone has requested a new trial, claiming the jury that convicted him was biased after revelations that his jury's foreperson had a history of Democratic activism and a string of anti-Trump, left-wing social media posts. Stone remains free on bond pending the outcome of the motion for a new trial.

Fox News' Brooke Singman, Gregg Re and Bill Mears contributed to this report.