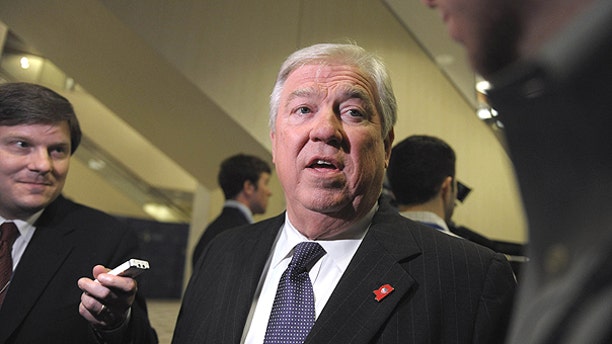 Feb. 28: Mississippi Gov. Haley Barbour speaks with the press at the National Governors Association Winter Meeting in Washington about the governs earlier meeting with President Obama at the White House.

A Mississippi judge is blocking the release of 21 inmates given pardons by former Gov. Haley Barbour, supporting the state attorney general's contention that Barbour's actions weren't in compliance with the state's constitutional requirements.

Circuit Judge Tomie Green issued an injunction late Wednesday at the request of Democratic Attorney General Jim Hood after Hood argued that the inmates given get-out-of-jail free cards didn't give sufficient public notice that they were seeking to have their records cleared.

According to Section 124 of the Mississippi Constitution, any inmate seeking a pardon must publish notice of the request in a newspaper covering the area where he was convicted 30 days before the governor can grant it.

Hood said he doesn't think the inmates held back from release had met the publication requirement.

Barbour issued more than 200 acts of leniency -- pardons or suspended sentences -- as one of his last acts before leaving office on Tuesday.

On Wednesday, he issued a statement saying that "some people have misunderstood the clemency process" since 189 of the inmates had already completed their incarceration and had been out of prison, a majority of them for years.

Barbour said they were given pardons so they could move on with their lives.

"Approximately 90 percent of these individuals were no longer in custody," he said. "The pardons were intended to allow them to find gainful employment or acquire professional licenses as well as hunt and vote.

He added that 26 people given clemency while still in custody is slightly more than one-tenth of 1 percent of those incarcerated.

"My decision about clemency was based upon the recommendation of the Parole Board in more than 90 percent of the cases," he said.

But Hood said a vast majority of those earning a pardon may not be eligible because of the paperwork requirement.

"The estimate is there maybe as many as 175 that we would have to look at. It appears from my preliminary review that the vast majority of them would probably be illegal pardons," he said.

So far, five of the pardoned prisoners have been released, four of whom are convicted murderers. All worked in the governor's mansion while Barbour was in office, a job they qualified for because they lived in minimum security prisons..

Randy Walker, who was shot and left for dead by Gatlin after he fled his wife's murder scene, said Barbour's decision gives the state "a black eye."

"I think the governor himself ought to look me in the eye and say, 'Hey, I let this guy go.' But there wasn't any of that. That's the coward's way out if you ask me," he said.

Mississippi Department of Corrections spokeswoman Suzanne Singletary said each of the five men released had issued paperwork to the newspapers within the last month. The 21 still in custody hadn't been let out yet because processing paperwork -- including a 48-hour advance notice to victims -- generally requires several days.

Before they can be released, however, Hood is having his staff call newspapers around the state to determine whether they had published notices of the request for pardons.

Hood said the judge also agreed to his request to require each of the five who've been released to appear in court to prove they met the publication requirement though a time and place for that hadn't been arranged yet.

Barbour spokeswoman Laura Hipp was not immediately available for comment about Green's decision to temporarily block release of the 21 inmates. It was not clear how many of the 21 are convicted killers.

The pardons angered even some of Barbour's most ardent supporters in Mississippi, including some conservatives who say the actions tarnished his legacy. But Barbour is unlikely to face political repercussions from the decisions.

A former Republican National Committee chairman who was widely hailed for his shepherding the state through several disasters, including Hurricane Katrina and the BP oil spill, Barbour had been named as a potential presidential candidate last year, before announcing last April that he didn't have the "fire in the belly" for a presidential bid.

The 64-year-old is now on the paid speakers' circuit and is also working for a Jackson-area law firm and for BGR, the Washington lobbying firm he founded two decades ago.