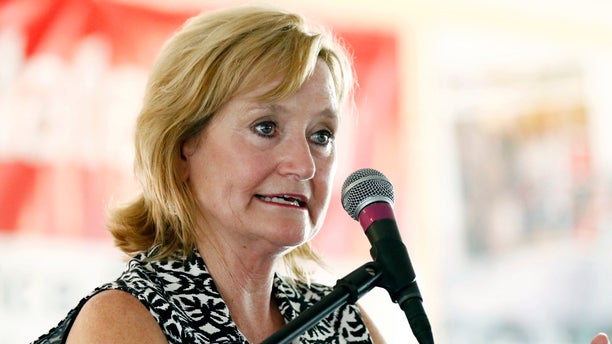 In this July 27, 2017, file photo Mississippi Commissioner of Agriculture and Commerce Cindy Hyde-Smith speaks at the Neshoba County Fair in Philadelphia, Miss. (AP)

Mississippi Gov. Phil Bryant announced Wednesday that the state’s agriculture commissioner, Cindy Hyde-Smith, will fill Sen. Thad Cochran’s vacant seat, in an historic appointment of the first woman from the state to the U.S. Senate.

"We will always owe Sen. Cochran our gratitude and our admiration. As the master said to the servant, well done, well done Thad Cochran," Bryant said Wednesday. "Now we turn to the future."

Bryant introduced Hyde-Smith as a "great public servant," a "rancher" and a "conservative."

"She's a conservative Republican elected twice to statewide office, more importantly, she's a good Christian," Bryant said. "This decision is mine and mine alone. We need all Mississippians to stand with us and welcome the next U.S. senator, Cindy Hyde- Smith."

Wednesday’s appointment of Hyde-Smith, who has served as the state’s agriculture commissioner since 2011, means she will hold the Senate seat for the special election on Nov. 6.

She added: "I am truly humbled, grateful. Thank God for that opportunity. I appreciate you all. Thank you."

Hyde-Smith is expected to run during the November special election to carry out the remainder of Cochran’s term, which would expire in 2020, where she would have the backing of the GOP establishment—against both Democratic candidates and the ultra-right-wing state Sen. Chris McDaniel.

McDaniel, who, unsuccessfully challenged Cochran for his seat in 2014, initially was campaigning against incumbent Sen. Roger Wicker, R-Miss., for the midterm elections in November. But last week, McDaniel announced he had shifted his resources to campaign for the Cochran seat.

On Wednesday, McDaniel penned an “open letter,” signed by over 100 Mississippi Republicans, to President Trump, urging him not to support Hyde-Smith’s appointment. 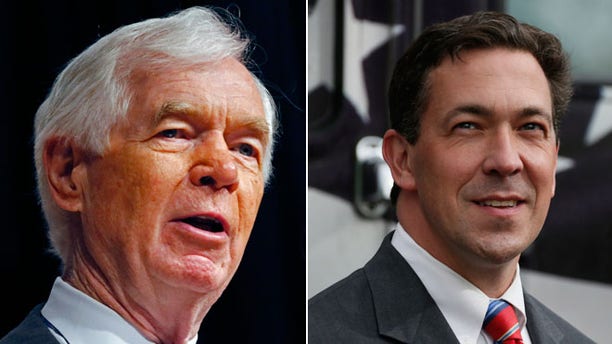 Sen. Thad Cochran, R-Miss., left, announced his resignation earlier this month. State Sen. Chris McDaniel, right, who competed against him in 2014, has shifted resources and will run for Cochran's open seat. (AP)

“We, the undersigned, oppose this nomination and urge you not to lend your endorsement to her campaign,” McDaniel wrote. “She is very unlikely to make the run-off in November, which is why we are writing to you, asking that you not lend your name to a candidate that is likely to lose. Thank you for considering our request. We are all supporting you and your agenda to Make America Great Again!”

But sources told Fox News last week that there was some concern on the Republican side of the aisle about McDaniel—with more than one source likening McDaniel’s candidacy to that of former Alabama Republican Senate nominee Roy Moore.

Sources told Fox News that the GOP establishment was pushing for McDaniel to compete against Wicker, as originally planned, rather than for Cochran’s seat, as some members are fearful that a McDaniel primary win could ultimately lead to a Democratic victory.

Mississippi, historically, has had a long list of Democrats elected to the Senate, but that has not happened since 1989, almost 30 years ago, when Sen. John C. Stennis held a seat.

Cochran served as a senator from Mississippi for 40 years, and resigned amid health challenges.

“I just learned of the pending resignation of Sen. Cochran – a person I admire and respect, and who has done so much for Mississippi over his tenure,” Espy said in a statement to Fox News. “However, now that he has announced his pending resignation, I would like to declare my strong intention to run for the United States Senate (for the Cochran seat).”

“It’s been some time since I worked in Washington and I have witnessed with dismay the continuing dysfunction,” Espy said. “I have proven that I can work with everyone as long as the goal is a better Mississippi.”

For Wicker’s seat, at this point, there are six declared Democrats running in the June 5 primary—including the State House Minority Leader David Baria and State Rep. Omeria Scott.