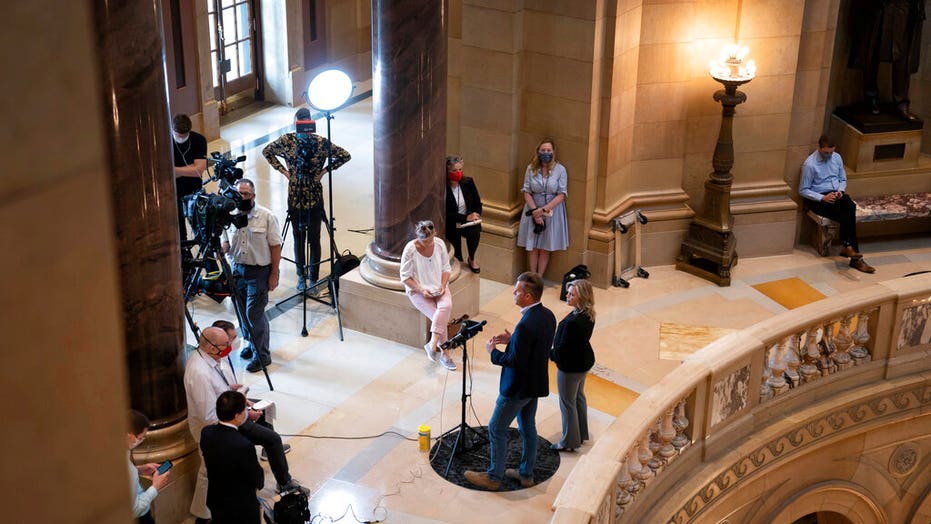 Minnesota lawmakers on Tuesday passed a broad package of police reforms intended to address criticisms of law enforcement procedures in the wake of the death of George Floyd in Minneapolis police custody.

The police accountability measures include a ban on neck restraints like the one used on Floyd before his death on May 25. The package also bans chokeholds and so-called warrior-style training. It changes rules on the use of force to stress the sanctity of life, and it changes arbitration rules affecting police unions.

Officers will get more training in dealing with people who have mental health issues and autism. The measure also creates a new advisory council for the state board that licenses officers.

House Minority Leader Kurt Daudt, R-Crown says that the combined bonding and tax bill does not have the needed Republican votes to pass Monday, July 20, 2020 in St. Paul, Minn.  (Star Tribune via AP)

Democratic House Majority Leader Ryan Winkler, of Golden Valley, said Minnesota will "continue to live in a powder keg" as long as its racial inequities in health, education, income and policing continue to exist.

"It is vitally important for the world to see us pass this legislation," Winkler said. "Of course, it's more important to protect the lives of people in our state. But Minnesota, I think, has suffered a severe reputational hit in the world. And it's because we have revealed the truth of our state, which is that we are among the worst when it comes to racial equality. And that cannot continue."

Passage came after nearly two months of difficult negotiations that followed Floyd's death and the ensuing nationwide protests against police brutality. Floyd was restrained face down in the street while an officer pressed his knee on Floyd's neck for nearly nine minutes.

The Republican-controlled State Senate sent the bill to Democratic Gov. Tim Walz on a 60-to-7 vote early Tuesday before adjourning the special session. The House approved the package 102-29 just before midnight. Walz said he plans to sign it.

Republican Senate Majority Leader Paul Gazelka, of East Gull Lake, told WCCO Radio that the final package included a "number of really good things" from both parties and had the support of law enforcement groups.

Walz had to call the special session to give lawmakers a chance to rescind the emergency powers he's been using to respond to the coronavirus pandemic. The House Democratic majority last week blocked a GOP effort to void those powers. Lawmakers then turned their attention to policing.