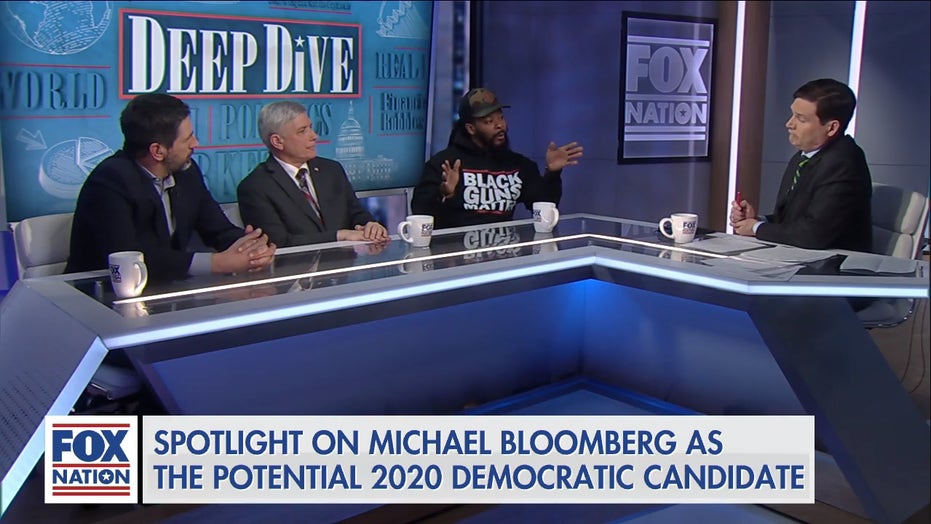 President Trump reinforced a sardonic nickname for billionaire Michael Bloomberg, dubbing him "Mini Mike" as he lobbed criticisms at the Democratic presidential hopeful, accusing him of using his wealth to "payoff" supporters of his campaign to earn their votes.

Bloomberg, the wealthiest candidate in the race, despite competition from billionaire Tom Steyer, has picked up steam in recent weeks after aggressively pouring more than $300 million of his own money into TV advertising alone to drum up support in Super Tuesday states.

Bloomberg's strategy to winning the Democratic nomination, which included skipping the first four early-voting states and focusing on amassing delegates from larger states around the country, has garnered criticism from Democratic rivals accusing him of trying to buy the party's nomination. Bloomberg has said he is willing to spend upwards of $1 billion on his campaign, an unprecedented amount of money by any presidential campaign in American history.

"What Mini Mike is doing is nothing less than a large scale illegal campaign contribution. He is “spreading” money all over the place, only to have recipients of his cash payments, many former opponents, happily joining or supporting his campaign. Isn’t that called a payoff?" Trump tweeted on Tuesday. "Mini is illegally buying the Democrat Nomination. They are taking it away from Bernie again. Mini Mike, Major Party Nominations are not for sale! Good luck in the debate tomorrow night and remember, no standing on boxes!"

Trump has attacked the 5-foot-8 candidate before, and several times has shaved off four inches from Bloomberg'sheight, claiming he needs to stand on a box to reach the podium.

Trump's mocking tweets come a day before Bloomberg, along with five other Democratic candidates, are set to take the stage in  Las Vegas for a debate before the Nevada caucuses, despite the former New York City mayor not appearing on the ballot in that state.

Bloomberg's appearance on the debate stage – his first – drew criticism from detractors who accused the Democratic National Committee of relaxing one of their criteria, which calls for a candidate to have a certain number of donors to qualify for the debate, in order to include Bloomberg.

Sanders, who earned a tight win in both Iowa and New Hampshire and is seen as the party's front-runner, is polling ahead of the other Democratic contenders, with 31 percent of voter support, according to a new NPR/PBS NewsHour/Marist poll. Bloomberg, however, is the next closest contender with 19 percent support.

"Why do you want to run against Bernie so badly?" Bloomberg later quipped at Trump.

"Mini Mike. No, I would rather run against you!" Trump said.

He also retweeted a doctored video showing Bloomberg's head barely poking out above a podium during a speech, before a giant cartoon foot stomped on him and a "Trump-Pence 2020" sign appeared.

According to the most recent Real Clear Politics matchups, polling indicated that Bloomberg would beat Trump in a November faceoff by 5.7 percentage points, 49.5 to 43.8.

It also predicted Sanders would beat Trump by 4.1 percentage points, 49.1 to 45.