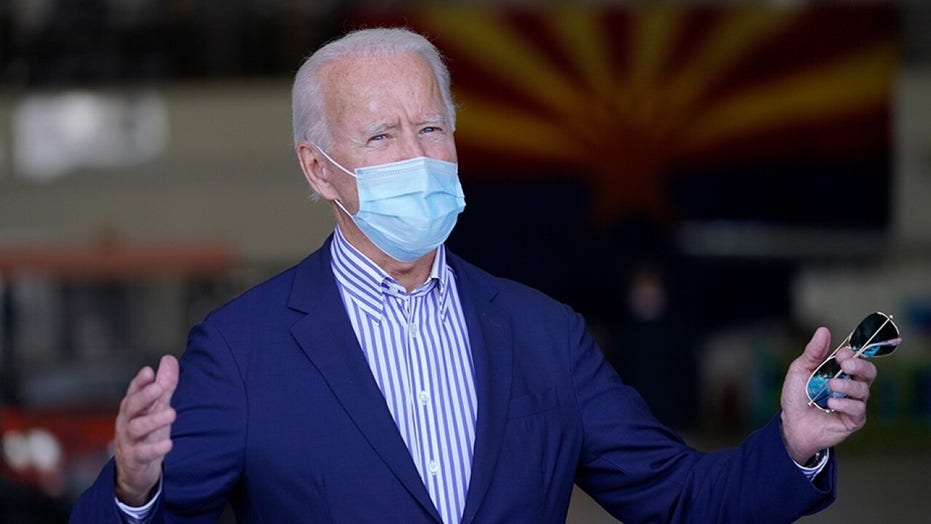 Progressives unveil their agenda under a Biden administration

Filmmaker Michael Moore urged backers of Sen. Bernie Sanders to get out and vote for Democratic presidential nominee Joe Biden, arguing they could help push the former vice president leftward to pass progressive priorities like Medicare-for-all.

Moore said if progressives vote they can make big gains and control the House, Senate and the White House. Biden then will have no choice but to sign liberal legislation that lawmakers hammer out, including Medicare-for-all, free college, raising the minimum wage and "all these things that were part of Bernie's great platform."

AOC, HOUSE PROGRESSIVES CALL FOR BAN ON CORPORATE EXECUTIVES IN A BIDEN CABINET

"... Just imagine [that a] universal health care bill comes on Joe Biden's desk to sign. Just ask yourself, do you think Joe Biden's gonna sit there, look at a bill that gives every American health care and [say] 'Hell no. ... I'm not signing this.' It's not happening," Moore said.

The Oscar-winning documentarian made the pitch Tuesday night during a virtual rally with Sanders, I-Vt. and Rep. Rashida Tlaib, D-Mich., to get out the vote in Michigan to defeat President Trump on Nov. 3. They were also joined by Rep. Debbie Dingell, D-Mich., and Detroit Lions player Oday Aboushi.

Democratic socialists and progressives have been leery of the more moderate Biden who has tried to distance himself from their priorities like Medicare-for-all and the Green New Deal. Biden made the case that he is the Democratic Party and his more moderate agenda is what Democrats endorsed when he defeated Sanders in the primary.

PROGRESSIVES, INCLUDING 'SQUAD,' RELEASE AGENDA TO PUSH BIDEN TO THE LEFT

But Moore expressed some optimism in liberal agenda items getting passed in a Biden administration, in part, because Biden went leftward in choosing his running-mate with Sen. Kamala Harris, D-Calif.

"I've been with Joe Biden a couple of times. I will say to you, this is an honest and decent person who has actually an enormous amount of humility," Moore said. "Even though Joe Biden does not share our politics -- those of you who voted for Bernie, progressive voters out there -- Joe Biden could have picked any of a number of people [for vice president]. He could have gone to the right or to the left. ... He went to the left. He went to -- as Trump reminds us every day -- he picked the most liberal senator in the United States Senate. That's saying a lot, considering Bernie is in the U.S. Senate. I have to have a lot of trust in this."

Moore also made an appeal to non-voters -- "the largest political party out there" -- to consider coming to the polls to vote out Trump, whom he called the "criminal-in-chief."

"Just give it a shot, just this once," Moore said.

Moore, a Flint native, said the world is on "pins and needles" for this election and outlined the stakes of winning Michigan, which Trump narrowly won by 10,704 votes in 2016.

BIDEN CAMPAIGN WARNS AGAINST COMPLACENCY IN MEMO: 'DONALD TRUMP CAN STILL WIN THIS'

"We're all very worried about Michigan and Wisconsin and Pennsylvania," Moore said in urging a big turnout.

Tlaib, who has been canvassing her Detroit-based district to get out the vote, said Democrats need to win decisively.

“This election has to be too big to rig," Tlaib said. "It has to be a huge turnout."