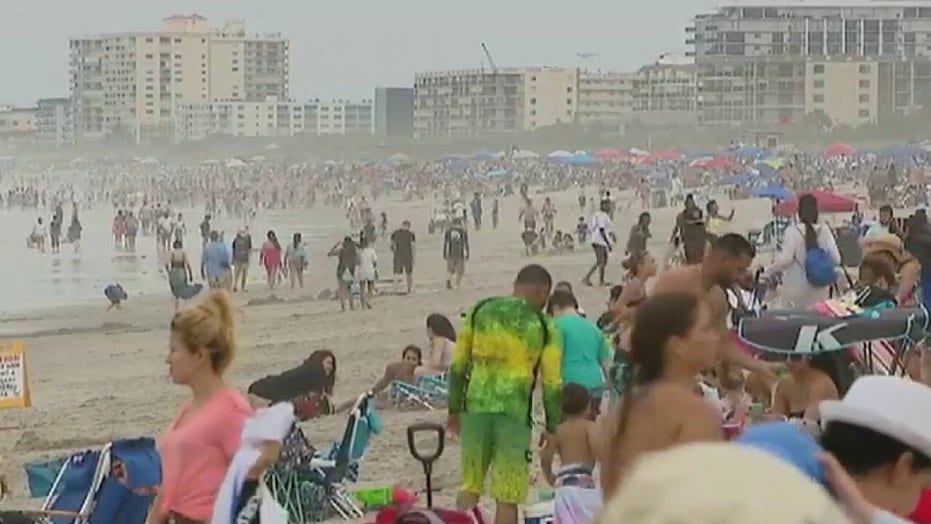 Phil Keating reports from a rainy Cocoa Beach with an update.

Governors and other elected officials are sending out mixed messages this holiday weekend as vacationers descended on beaches in droves despite the country still grappling with the coronavirus pandemic.

Thousands of sun-starved Americans from the Jersey shore to Southern California hit the sand and surf over the Memorial Day weekend after months of being quarantined in their homes in what is the first major test of the country reopening amid the ongoing public health crisis.

NORTHAM CRITICIZED FOR NOT WEARING MASK

“Great run this morning with [New Jersey First Lady Tammy Murphy], followed by a nice stroll along the boardwalk in Seaside Heights and Seaside Park,” a masked New Jersey Gov. Phil Murphy tweeted on Monday along with a photo of him and his wife on the boardwalk. “Lots of folks wearing masks, practicing social distancing, and responsibly enjoying our beautiful Shore this MDW.”

Despite leading one of the states hardest hit by the pandemic – with more than 153,000 confirmed cases and over 11,000 deaths as of Monday – Murphy decided two weeks ago to reopen the state’s beaches, albeit with some stipulations.

Directives include keeping at least six feet apart, except for relatives or household members. Masks are encouraged but not required on the sand. Bathrooms, showers and changing rooms will be open and cleaned frequently.

The decision assured the Jersey Shore's place as a summertime magnet for vacationers from neighboring New York and Pennsylvania. But there are still changes. On the boardwalks, while shops are open there will be no fireworks, Ferris wheel rides, roller coasters, go-karts or arcade games. Atlantic City’s casinos remain closed.

While the cool weather kept some people indoors, images for the state showed a business-as-usual affair in New Jersey with vacationers strolling along the boardwalk and beaches – many donning masks – but many locals said they were staying in as out-of-towners descended.

“The unfortunate thing is that all the out-of-town people have been cooped up the same amount of time that the locals have been here,” said Christine Barthelme of Point Pleasant, N.J. “My family will do mostly what we do on every holiday weekend here: relax in our backyard, have a barbecue and light the fire pit.”

Down the Atlantic coast from New Jersey, similar scenes were playing out in popular beach towns in both Maryland and Virginia.

“We have officers on horseback, foot patrol and vehicle patrol,” Ashley Miller with Ocean City police told local media. “If we do see groups of 10 or more, we remind them that it is a violation of the governor’s order. Depending on the situation, we would determine what kind of action would be taken.”

“We do see a lot of voluntary compliance,” Miller said.

Gov. Ralph Northam, a Democrat, faced criticism on social media after appearing in Virginia Beach Saturday without a face mask and not practicing social distancing measures around members of the public.

Northam reportedly visited the beach with Mayor Bobby Dye on the second day of the beach’s reopening, according to local news outlet 13News Now. Virginia Beach's reopening is considered a test to see if people can safely follow social distancing rules before other beaches in Virginia reopen.

Northam, who previously served as an Army doctor, came under fire when images of him surfaced on social media not wearing a face mask and apparently in close contact with other community members. A spokeswoman for the governor’s office said that Northam should have brought a mask out with him — but that he hadn't been expecting to be near anyone.

The opening of beaches in Maryland and Virginia for the holiday weekend coincided with the number of infections in the Washington, D.C., region topping 90,000 and fatalities hitting 3,880, and as a one-day spike in new infections drew concerns from officials in the capital about the safety of the city reopening later this week.

LaQuandra Nesbitt, director of the D.C. health department, told reporters on Sunday that data collected over the weekend showed the number of cases linked to community spread increased from a low of 68 on day 12 to 118 on day 13 – breaking a 12-day streak of declines and meaning the city would have to “reset” its planning for reopening.

In the Tampa area along Florida's Gulf Coast, the crowds were so big that authorities took the extraordinary step of closing parking lots because they were full.

Across the country in California, hordes of people flocked to the state’s famed beaches. Large crowds were spotted gathering in Los Angeles’ Venice Beach as well on beaches from Orange County up to San Francisco.

While Gov. Gavin Newsom – who has arguably taken one of the most cautious approaches to reopening – remained mostly quiet over the weekend, his office still cautioned residents to continue practicing social distancing.

"It’s a 3 day weekend. It’s nice outside. That doesn’t mean #COVID19 has gone away,” he tweeted. “Wash your hands. Stay 6 feet apart. Wear a face covering. Be smart. Your actions can literally save lives.”

It’s not just beaches that have concerned officials, however, as people packed bars and restaurants at the Lake of the Ozarks in Missouri, a vacation spot popular with Chicagoans, over the weekend. One video showed a crammed pool where vacationers lounged close together without masks, St. Louis station KMOV-TV reported.

On the Sunday talk shows, Dr. Deborah Birx, coordinator of the White House coronavirus task force, said she was “very concerned” about scenes of people crowding together over the weekend.

“We really want to be clear all the time that social distancing is absolutely critical. And if you can’t social distance and you’re outside, you must wear a mask,” she said on ABC's “This Week.”