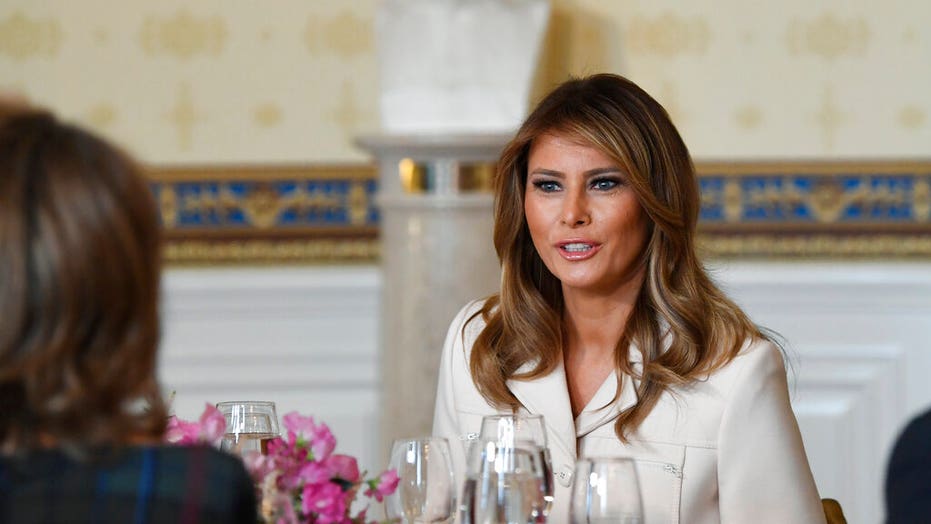 First lady Melania Trump expressed the urgency to combat cyberbullying during a lunch with governor's spouses on Monday, pushing her 'Be Best' initiative even as President Trump continued to lambast Democratic lawmakers and the "fake news" media on Twitter.

“I know the many issues associated with online safety will be hard to stop, but there is a need now more than ever to teach our children healthy behavior to secure a safer future for all of them,” the first lady said during a small address in the White House Blue Room.

Trump has championed the youth initiative to stop cyberbullying and she shared the touching story of a 16-year-old high school junior, Channing Smith, who committed suicide in September 2019 after his classmates outed him as gay by spreading intimate messages between him and a boy on social media.

“He was so ashamed and felt so hopeless that Channing committed suicide,” Trump said. “Since their tragic loss, the Smith family has been using their grief to partner with influencers such as Billy Ray Cyrus to educate people about the dangers of cyberassault.”

Cyrus, the singer of the country hit "Achy Breaky Heart," has worked with the Smith family to stop bullying online and met with the first lady in November to discuss the issue.

Trump urged the governors' spouses, who accompanied the governors to the White House for their annual meeting with the president, to “consider addressing this issue in your own home states so that no family will have to suffer from a loss like the Smiths.”

She also asked them to “promote values of encouragement, kindness, compassion and respect.”

Meanwhile, the president, ahead of a MAGA rally in New Hampshire Monday night, taunted Sen. Joe Manchin, D-W.V, calling him "Senator Joe Munchkin" and disparaging him for voting with Democrat's to convict him on two counts of impeachment.

He also decried the impeachment proceedings a Democratic "hoax" and tweeted: "AOC will primary Cryin’ Chuck Schumer, and win, and Jerry Nadler has a good chance of losing to his far left primary opponent! It is all getting quite interesting. Pelosi will lose the House, AGAIN! My poll numbers great."