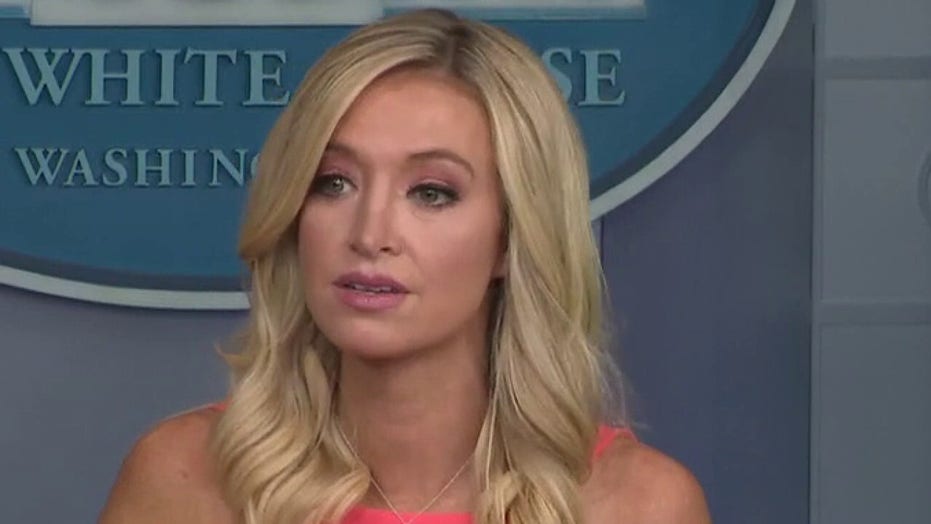 McEnany: Neither Pence nor Trump were briefed on Russian bounty intelligence

White House press secretary Kayleigh McEnany faced a barrage of questions Monday about why the White House was not briefed by intelligence on a report claiming Russia paid Taliban-linked militants to kill U.S. troops in Afghanistan.

During a press briefing, McEnany repeatedly asserted there was “no consensus” on the validity of such reports and said the president was only briefed on verified intelligence.

The press secretary added that the intelligence community is fraught with “dissenting opinions” in regards to the Russian bounties. The claim "would not be elevated to the president until it was verified," McEnany added.

The press secretary added that the New York Times, which broke the story, “erroneously reported” that the president had been briefed on the intelligence when neither he nor Vice President Pence had been briefed.

McEnany noted “there’s no stronger advocate” for members of the military than President Trump and said he has been “extremely strong” on Russia, “imposing sanctions on hundreds of Russian individuals, expelling dozens of diplomats, closing two Russian consulates, withdrawing from an IMF treaty and several other actions.”

The press secretary said the White House had invited eight members of Congress from both parties to be briefed on the situation Monday afternoon.

McEnany’s assertion echoed that of another senior administration official who spoke with Fox News, who said there was “no consensus” on the intelligence report claiming Russia offered bounties to Taliban-linked militants who attacked the U.S. military.

On Sunday night, Trump on Twitter insisted he had not been informed of the reports because the intelligence community "did not find this info credible.”

Russia denied that it had issued bounties against American soldiers. When asked about the report, spokesman to Russian President Vladimir Putin Dmitry Peskov told MSNBC: "Maybe I can say, it's a little bit rude, but this is 100% bulls***.” A Taliban spokesman also denied any truth to the report.

The Washington Post further reported that the Russian bounties are "believed to have resulted in the deaths of several U.S. service members." The Associated Press reported that officials said an April 2019 attack on an American convoy that killed three Marines in Afghanistan is under investigation.

Earlier Monday, McEnany hit House Speaker Nancy Pelosi for her criticism of Trump over the allegations. "Nancy Pelosi is entirely off base. This president has been very tough on Russia. Sanctioning innumerable Russian targets, closing Russian consulates," McEnany said on "Fox & Friends."

"She's talking about alleged intelligence that was never briefed to the president of the United States, and what's she doing? She's taking a report based on anonymous sourcing that was just dead wrong," McEnany added.

Pelosi,  D-Calif., said on Sunday that she’s unclear as to what “the Russians have on” Trump, but added that it must have swayed his administration not to take action after U.S. intelligence learned that Moscow spies offered bounties to Afghan militants to kill U.S. troops.

Pelosi said during an interview on ABC’s “This Week” that throughout Trump’s presidency he has ignored allegations against misdeeds committed by Russia, but that the new reports on bounties “is as bad as it gets.”

“This is as bad as it gets, and yet the president will not confront the Russians on this score, denies being briefed,” Pelosi said. “I don't know what the Russians have on the president, politically, personally, financially, or whatever it is. But he wants to ignore, he wants to bring them back to the G-8 despite the annexation of Crimea and invasion of Ukraine.”

The press secretary also said that multiple directors of national intelligence and National Security Adviser Robert O'Brien have said the president was not briefed, and that former national security adviser John Bolton, who just released a scathing book about the Trump White House, said he was not aware of the alleged intelligence.

Bolton, however, said it was "disturbing" that Trump had not heard of the alleged bounty reports.