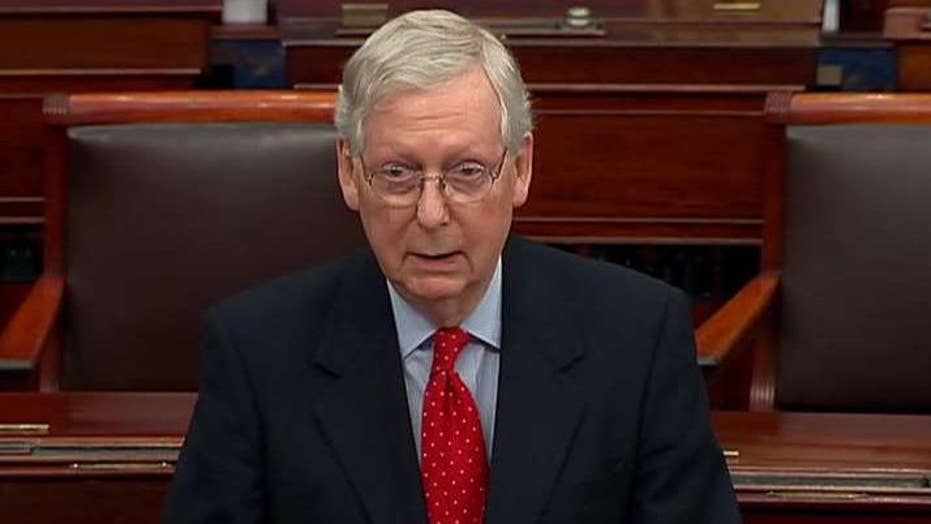 At the same time, McConnell said it was "completely appropriate" to ask questions concerning the intelligence that led to the attack and that military leaders and the Defense Department will brief the full Senate on Wednesday. Two defense officials tell Fox News there will be separate House and Senate briefings and that Secretary of Defense Mark Esper and Chairman of the Joint Chiefs of Staff Mark Milley will attend.

"Unfortunately in this toxic political environment, some of our colleagues rushed to blame our own government before even knowing the facts, rushed to split hairs about intelligence before being briefed on it, and rushed to downplay Soleimani while presenting our own president as the villain," McConnell said.

"Soon after the news broke, one of our distinguished collages made a public statement that rightly called Soleimani a murderer, and then amazingly walked that message back when the far left objected to the factual statement," he continued. Since then I believe all her criticism has been directed at our own president." 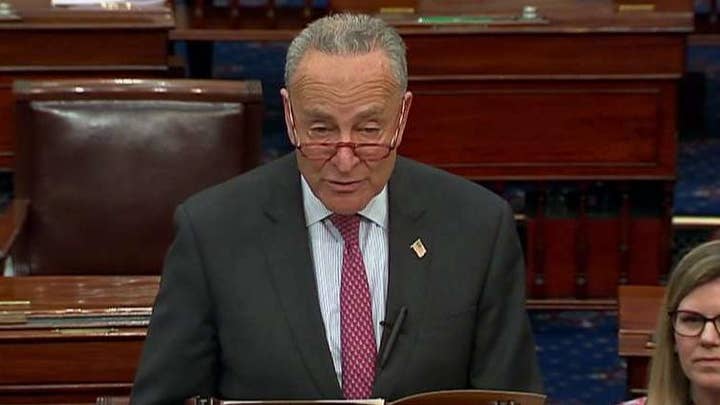 Warren's head-turning comments have drawn rebukes from conservatives and other commentators, who called her remarks an "unhinged" bid to salvage her campaign's foundering poll numbers and sagging fundraising.

McConnell concluded: "Look, the Senate is supposed to be the chamber where overheated partisan passions give way to sober judgment. Can we at least wait until we know the facts? Can we not maintain a shred -- just a shred -- of national unity for five minutes before deepening the partisan trenches? Must Democrats' distaste for this president dominate every thought they express, and every decision they make? ... We're all Americans first, and we're all in this together."

Separately, McConnell also showed no sign of wavering on his position that the Senate should hear arguments before any new witnesses might testify in the impeachment trial, even as former national security advisor John Bolton stunned Capitol Hill earlier in the day by announcing that he would be willing to comply with a subpoena.

BOLTON THROWS IMPEACHMENT CURVEBALL -- WHAT DOES IT MEAN FOR TRUMP?

McConnell maintained that the Senate has a "unanimous bipartisan precedent for when to handle mid-trial questions such as witnesses: in the middle of the trial."  In 1999, McConnell said, "every single U.S. Senator agreed to establish basic parameters for the start of the trial upfront, and reserve mid-trial questions such as witnesses until later. ... The Senate said, 100 to nothing, that was good enough for President Clinton. So it ought to be good enough for President Trump. Fair is fair."

But, Schumer countered that "we have never had [an impeachment trial] with no witnesses -- not once." Saying there was a "very clear difference of opinion about what it means to have a fair trial," Schumer asked whether we will "have a fair trial or a cover-up."

"It is now up to four Senate Republicans ... to ensure all the evidence is presented at the outcome of the Senate trial," Schumer said, noting that a simple majority vote in the Senate would establish procedures, and that all Democrats were united.

"If any Senate Republican opposes issuing subpoenas, ... they would make it absolutely clear they are participating in a cover-up on one of the most sacred duties we have in this Senate," Schumer said.

"We don't know what the witnesses will say," Schumer added. "They could be exculpatory for President Trump."

In a surprise statement hours earlier, Bolton said he is “prepared to testify” if he is subpoenaed by the Senate.

Bolton, who left the White House in September, said that he has weighed the issues of executive privilege and that after “careful consideration and study” decided that he would comply with any Senate subpoena.

“If the Senate issues a subpoena for my testimony, I am prepared to testify," he said in a statement.

House Speaker Nancy Pelosi, D-Calif., has stalled the transmission of House-passed articles of impeachment against Trump in a bid for that witness testimony. Schumer has proposed calling several witnesses, including Bolton and White House chief of staff Mick Mulvaney, but McConnell has so far rejected Schumer's terms.

It is uncertain when Pelosi will eventually send the articles to the Senate. If she decides to do so in the coming days, a trial could start as soon as this week.

In a tweet Monday, Pelosi did not address the timing. But she said Trump and McConnell have “run out of excuses” for not calling witnesses or producing documents Trump has blocked.