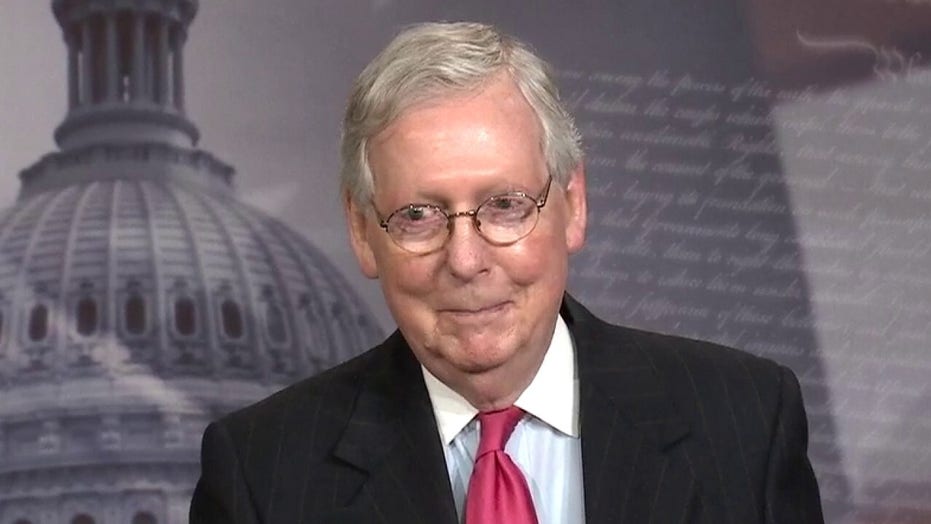 The Senate pivoted from a partisan impeachment to the unanimous passage of a rescue package for the country, says Senate Majority Leader Mitch McConnell.

Senate Majority Leader Mitch McConnell on Friday warned that there will be “glitches” in the rollout of the massive stimulus package that went into effect last Friday to address the economic impact of the coronavirus outbreak.

In an interview with McClatchy, McConnell, R-Ky., said that there are “bound to be plenty of mistakes” as the government puts into action the new package worth over $2 trillion.

“There are bound to be problems,” he told the outlet. “You can’t pass a bill of this magnitude in a week and have a perfect implementation of $2.2 trillion, so sure there are going to be glitches.”

The 880-page coronavirus stimulus package, which was passed and signed into law by Trump last Friday, amounted to the largest economic relief bill in the history of the U.S., with massive amounts of aid slated for individuals, large corporations and small businesses — and its unanimous passage in the Senate, followed by swift passage in the House, came despite concerns on both sides about whether it involved too much spending, or not enough.

Lawmakers said the package specifically would help replace the salaries of furloughed workers for four months, rather than the three months first proposed. Furloughed workers would get whatever amount a state usually provides for unemployment, plus a $600-per-week add-on.

McConnell, on Friday, also sought to tamp down talk of a “Phase 4” coronavirus stimulus package.

“We’re watching how this is implemented,” he said.

Lawmakers in both the House and the Senate already are eyeing a fourth coronavirus response bill, though some, like McConnell, have voiced caution about continuing to appropriate such massive sums of money.

“I think the odds are we’ll need more legislation. First, we don’t know the extent of the crisis in terms of the magnitude, so that could rise. But there are going to be problems that we don’t realize now that we’re going to have to grapple with,” Senate Minority Leader Chuck Schumer, D-N.Y., said recently, according to The Hill. “So I think the odds are high there will be a COVID-4.”

Meanwhile, the president, this week, also voiced support for a “Phase 4” bill—focused solely on infrastructure.

“With interest rates for the United States being at ZERO, this is the time to do our decades long awaited Infrastructure Bill,” Trump tweeted Tuesday. “It should be VERY BIG & BOLD, Two Trillion Dollars, and be focused solely on jobs and rebuilding the once great infrastructure of our Country! Phase 4.”

Trump has sought a major infrastructure bill ever since taking office and would appear to be pitching that plan anew as a form of economic stimulus.