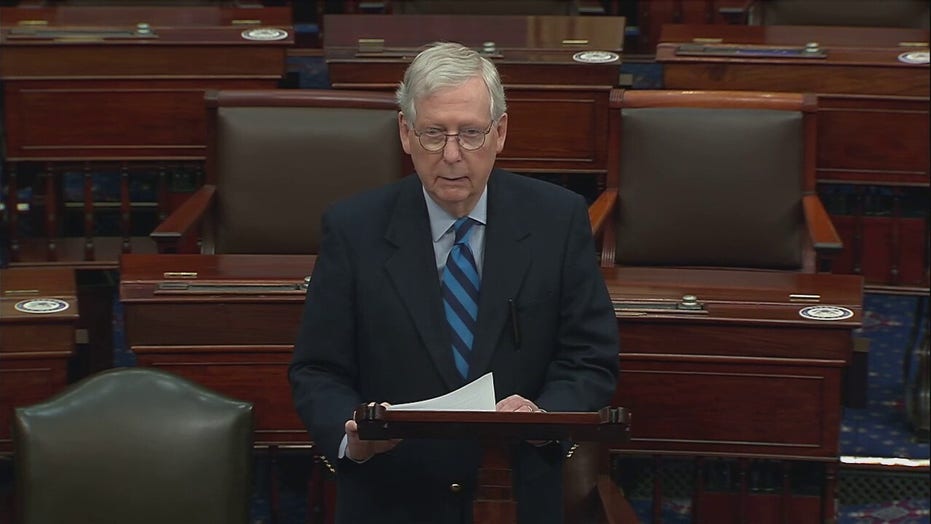 McConnell: Capitol mob was 'fed lies,' 'provoked by the president'

Senate Majority Leader Mitch McConnell, R-Ky., placed blame on President Trump for the riot at the Capitol on Jan. 6 that left five people dead, including a Capitol police officer.

McConnell addressed the insurrection during a floor speech Tuesday afternoon and said Trump "provoked" the mob that tried to use "fear and violence" to stop the Joint Session of Congress from certifying President-elect Joe Biden's win.

"The mob was fed lies," McConnell said. "They were provoked by the president and other powerful people."

"...But we pressed on. We stood together and said an angry mob would not get veto power over the rule of law in our nation, not even for one night."

McConnell's comments came a week after the House voted to impeach Trump for "incitement of insurrection." Since his election defeat, Trump has refused to concede, claimed he won the election in a landslide and spread allegations of extensive election fraud despite courts repeatedly rejecting his claims.

The culmination of his efforts to stop Biden from taking office came when he called his supporters to Washington on Jan. 6 and whipped up the crowd before they marched to the Capitol to try to stop Congress from certifying Biden's win.

The insurrection forced Congress to abruptly recess and take shelter. Yet the lawmakers later reconvened and certified Biden's victory -- despite some GOP objections, led by Sens. Ted Cruz of Texas and Josh Hawley of Missouri.

"We certified the people's choice for their 46th president," McConnell said. "Tomorrow President-elect Biden and Vice President-elect [Kamala] Harris will be sworn in. We'll have a safe and successful inaugural."

McConnell is seen as the lynchpin to any chance Trump would be convicted in the Senate. Unlike some of his GOP colleagues, McConnell has not rejected impeachment outright and said he'd carefully weigh the evidence during a trial. If McConnell joins with Democrats in convicting Trump, he may clear the way for 16 other Republicans to join him to reach the two-thirds vote threshold.

McConnell and GOP Senate leadership have not been whipping their colleagues to hold the line and protect Trump. Sen. John Cornyn, R-Texas, told reporters Tuesday that impeachment will be a "vote of conscience" for the senators.

SENATE CONSIDERING BIDEN NOMINEES TUESDAY, WITH NO ANNOUNCEMENT YET ON HANDLING IMPEACHMENT, OTHER BUSINESS

Once House Speaker Nancy Pelosi, D-Calif., sends over the article of impeachment to the Senate, it would trigger a trial that would likely slow down the Senate's business of confirming Biden's incoming Cabinet. Some GOP senators -- including Sens. Tom Cotton of Arkansas and Joni Ernst of Iowa -- have argued it could be unconstitutional to even hold a trial for Trump when he's out of office, though other legal scholars disagree.

Sen. Chuck Schumer, D-N.Y., the incoming majority leader, met with McConnell later Tuesday afternoon for about 30 minutes to discuss a new power-sharing agreement, Biden cabinet nominations and how to proceed on impeachment. "All I’m going to say is we discussed a whole lot of issues," Schumer said as he departed McConnell's office.

Democrats will hold a tie-breaking majority Wednesday afternoon when the Biden Administration takes over and three new Democratic senators are set to be sworn-in: Georgia Democrats Jon Ossoff and Raphael Warnock and California's Alex Padilla, who will succeed Harris.

DEMOCRATS TO TAKE CONTROL OF THE SENATE ON WEDNESDAY AS WARNOCK, OSSOFF SET TO BE SWORN IN

Schumer said Tuesday there will be a Senate impeachment trial. And if Trump is convicted, the Senate will take a vote to bar him from running for office ever again.

"Once he leaves office, do we really expect him to change his tune and accept the truth?" Schumer said. "Of course not. He will continue spreading lies about the election and stoking the grievances of his most radical supporters. Using the prospect of a future presidential run to poison the public arena."

"Donald Trump should not be eligible to run for office ever again," Schumer added. "All of us want to put this awful chapter in our nation's history behind us."