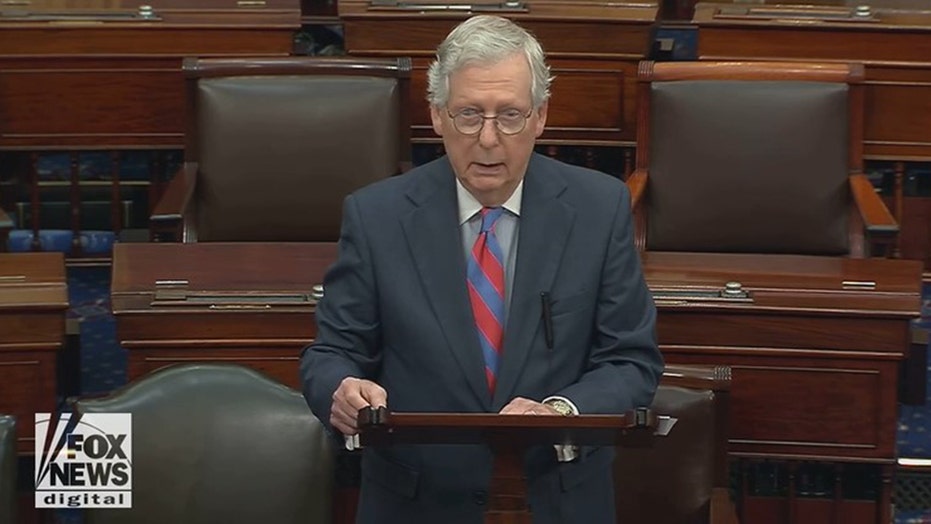 On the Senate floor Thursday, McConnell, R-Ky., cited crime statistics in his hometown of Louisville, Kentucky, saying the city’s 2021 murder total is "rapidly closing in on the all-time record we just set last year."

"These aren’t just local problems. They’re national trends – 2020 saw the U.S. homicide rate jump more than at any point in over a century," McConnell said. "The worst spike in the murder rate in more than 100 years."

McConnell went on to point to other law enforcement crises hitting the nation.

Attorney General Merrick Garland is sworn in during a Senate Judiciary Committee hearing examining the Department of Justice on Capitol Hill in Washington, Wednesday, Oct. 27, 2021. (Tom Brenner/Pool via AP)

"The law enforcement crises don’t stop there. Our southern border saw more illegal crossings last year than in any year on record, yet ICE has made its fewest interior arrests in a decade," he said. "A crime epidemic and a border crisis."

"These are the sort of problems you might expect the nation’s top law enforcement officer to face head-on," McConnell said.

"These are the sort of issues that should keep the Department of Justice up all night," he added. "But Attorney General Garland has other priorities."

McConnell slammed Garland for making "waves" earlier this month with his "bizarre memo" that directed the FBI and the Justice Departments Criminal, National Security and Civil Rights divisions "to focus special attention and scrutiny on parents who have opinions about their local school boards."

Garland faced tough questioning Wednesday during a hearing before the Senate Judiciary Committee – questions that McConnell said Garland "seemed incapable of giving a satisfactory explanation as to why the parents of America are his A-1 priority," adding that he also couldn’t explain "why his bizarre guidance came just days after a powerful interest group sent a letter demanding this action."

McConnell was referring to the National School Boards Association’s letter, which prompted Garland's memo and cited instances including nonviolent behavior that did not include threats, but that was deemed disruptive. The NSBA had called for the use of measures, including the Patriot Act, which is typically used to address terrorism. Their second letter said they "regret and apologize for the letter," stating that "there was no justification for some of the language" they had used.

McConnell added that Garland has "insisted that all his department is concerned about is, ‘violence and threats of violence.’"

"Of course violence and threats are always wrong. They are also already illegal, and already the purview of local law enforcement," McConnell said, but added that "there is no evidence that America’s concerned parents needed to be singled out as targets of this J. Edgar Hoover act from the feds."

"If Democrats at the local, state and federal levels want fewer concerned parents showing up at school board meetings, the solution is to stop indoctrinating their kids with crazy messages on the taxpayers’ dime," he continued, "not trying to use federal law enforcement to frighten families out of their First Amendment rights."

School board members vote to enact Policy 8040 during a school board meeting at the Loudoun County Public Schools Administration Building on Aug. 11, 2021 in Ashburn, Virginia.  (Photo by Ricky Carioti/The Washington Post via Getty Images)

Garland, during testimony on Wednesday, maintained that his memo is about threats of violence, and does not target parents for speaking out against mask mandates and curriculum, like critical race theory, in schools.

Garland claimed that the DOJ is not just concerned about school board officials, but a "rising tide" of violence against judges, prosecutors, election administrators and others.