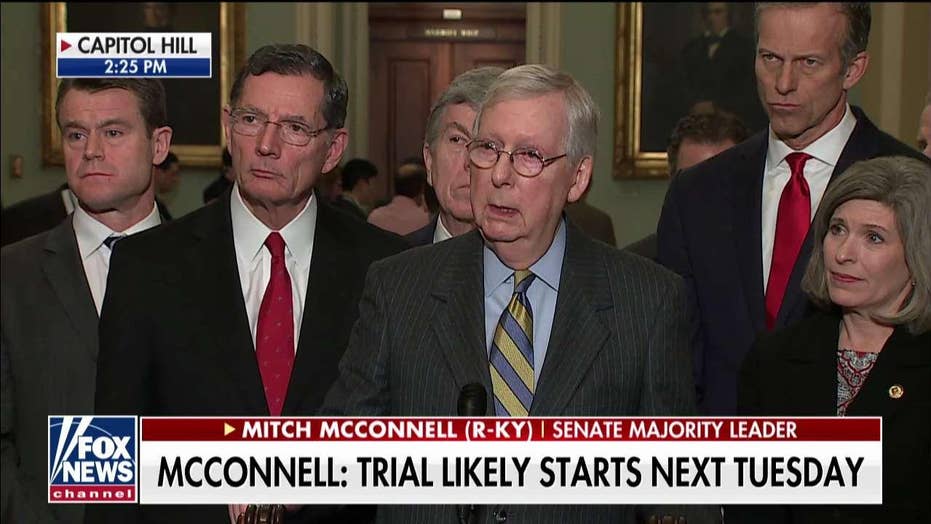 The Senate is poised to launch into an impeachment trial for President Trump as early as next Tuesday, Majority Leader Mitch McConnell, R-Ky., said, as warring factions on Capitol Hill ended an impasse that had left the entire process in limbo for nearly four weeks.

The GOP leader, in remarks to reporters Tuesday, also shot down the notion -- floated by the president but later amplified by Democrats -- that the Senate could vote to dismiss the case. And he warned those calling for new testimony that Republicans could have the chance to call witnesses, too, as he set expectations for proceedings to start in the coming days and formally launch next week.

“We will be able to go through some preliminary steps this week … which would give us the ability to start the actual trial next Tuesday,” McConnell told reporters, while once again stating that he has the votes to pass the so-called "organizing resolution" that would lay out the framework for the trial.

“All 53 of us have reached an agreement,” he said, referring to Republican members.

"A dismissal is a cover-up," Pelosi said in a statement. "The American people will fully understand the Senate’s move to begin the trial without witnesses and documents as a pure political cover-up. Leader McConnell and the President are afraid of more facts coming to light."

"There is little or no sentiment for a motion to dismiss," he told reporters.

As he has before, McConnell said the Senate will deal with the question of potential witnesses "at the appropriate time."

He also said that "both sides will call witnesses they want to hear from.”

Democrats have sought trial testimony from ex-National Security Adviser John Bolton, who signaled last week that he would be willing to comply with a congressional subpoena. McConnell was asked Tuesday, though, whether Republicans would call Hunter Biden -- former Vice President Joe Biden's son, who was at the center of a controversy that Trump sought Ukraine's help investigating, thus triggering impeachment -- as a witness.

“I can’t imagine only the witnesses our Democratic colleagues want to call would be called,” he warned.

More details on the contours of the trial will emerge in the coming days.

Pelosi didn’t immediately announce whom she picked to be impeachment managers, who will act as prosecutors in the Senate. But they’ll be spelled out in the resolution that the House will vote on Wednesday to formally transmit the two articles, which are abuse of power and obstruction of Congress.

After Pelosi announced the timeline to her Democratic caucus, her colleagues held out hope that enough GOP senators would sign on to rules for a trial to go forward with documents and testimony from witnesses such as Bolton.

Meanwhile, Trump has shored up his legal defense team, which will be led by White House Counsel Pat Cipollone and include Jay Sekulow and Cipollone deputies Michael Purpura and Patrick Philbin.

Pelosi had sat on the articles in order to urge the Senate to agree to favorable terms of the trial that would allow new evidence to be presented. But McConnell announced that he has the votes to start the trial without an agreement on witnesses and blasted Pelosi for treating impeachment like a “political game.”

"An arbitrary four-week delay does not show urgency,” McConnell said Tuesday. “And these demands for the Senate to pre-commit to reopening the House investigation do not show confidence.”

House Democrats, however, said the delay helped strengthen the case against Trump with more documents being revealed on Trump’s involvement in the pressure campaign on Ukraine to investigate his political rivals and Bolton announcing he’d be willing to testify.

Amid demands for a robust trial, GOP Sens. Susan Collins of Maine, Lisa Murkowski of Alaska and Mitt Romney of Utah signaled they’d favor calling the witnesses. A fourth GOP senator would be needed to pass a Senate resolution.

“The speaker's decision has created space for individuals like Susan Collins,” Jeffries said, "and Lisa Murkowski and most recently Mitt Romney to publicly and expressly say individuals like John Bolton should testify if the Senate is going to conduct a fair trial. So we are three-quarters of the way [to a fair trial]."

Democrats expressed contentment that they have done their part to uphold the Constitution and now it’s time for the Senate to do its job.

“I think everybody is looking forward to ... going forward,” said Rep. Bennie Thompson of Mississippi of Wednesday's vote.

Thompson said Pelosi’s delay paid off in forcing a public discussion on how senators should be fair and impartial jurors and put pressure on senators who declared that they were already in Trump's corner.

“From a strategy standpoint, I would think it at least worked that it put before the public the process of how it’s supposed to work… [and] some of those members are now in a difficult spot," Thompson said.

What's still unknown is who will be the face of the prosecution.

Impeachment managers will argue the case in the trial against Trump as senators sit in their seats listening, serving as jurors. During President Clinton’s impeachment trial, then-Rep. Lindsey Graham gained nationwide attention as one of the 13 House managers; the position can put lesser-known pols in the spotlight.

One person not angling for the job is Rep. Elissa Slotkin, a Michigan swing-district freshman who was instrumental in launching the impeachment inquiry.

Asked Tuesday if she’s an impeachment manager, Slotkin replied: “I hope not.”