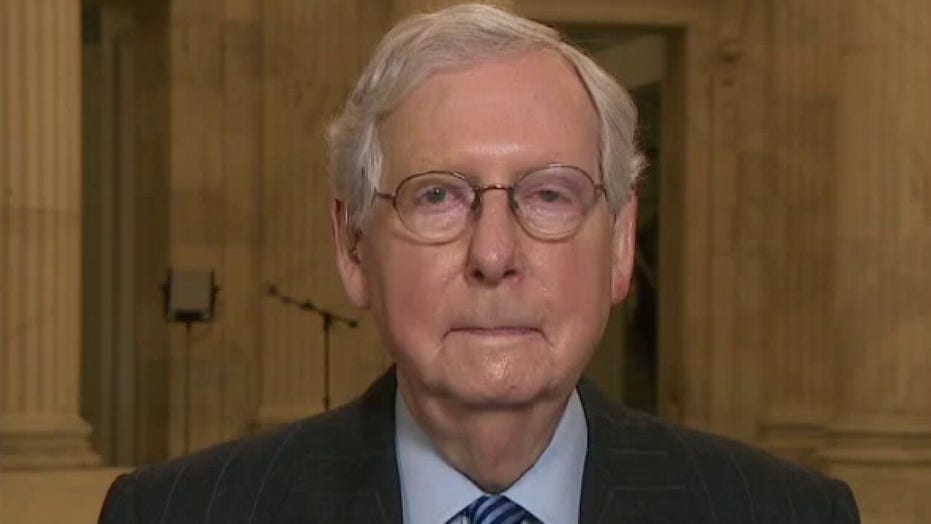 "They've been threatening to pack the court [since] before the [Amy Coney] Barrett nomination came along [and] before Justice [Ruth Bader] Ginsburg passed away," McConnell told host Shannon Bream. "These are long-standing threats.

"They may have ratcheted up a little bit lately, but this isn't anything new," McConnell added. "They've been promising to blow up the Senate by changing the filibuster rule, admitting two new states -- [Washington] D.C. and Puerto Rico -- to give them four new Democratic senators ... They were talking about that earlier in the year. Nothing new, same old threats and intimidation by the hard left."

Rep. Alexandria Ocasio-Cortez D-N.Y., on Monday, tweeted "Expand the court," immediately after the confirmation of Barrett.

"Republicans do this because they don’t believe Dems have the stones to play hardball like they do. And for a long time they’ve been correct," she continued. "But do not let them bully the public into thinking their bulldozing is normal but a response isn’t. There is a legal process for expansion."

Turning to the confirmation of Barrett to the Supreme Court by the Senate, McConnell described her as a "stunningly outstanding nominee," added that America could "not find a better nominee anywhere in the country."

"Not only that, she's got a compelling personal story; seven children, two adopted, one of them with special needs, a great role model for working women across America," the majority leader added. "This is a happy night for the country, and in particular for this Senate Republican majority."

McConnell also slammed Joe Biden for remarks he made at an drive-in event in Bucks County, Pa. over the weekend when large number of Trump supporters showed up outside the venue.

"It's eerily reminiscent of Hillary Clinton calling Trump supporters four years ago 'deplorables,'" McConnell said. "That's kind of the elite view of East Coast liberals who look down on the rest of the country ...

"By the way, I'm the only one of the four congressional leaders not from New York or California," he added. "We resent this condescending attitude toward anybody who doesn't live on the coasts. And Joe Biden just made a very similar comment about Trump supporters."