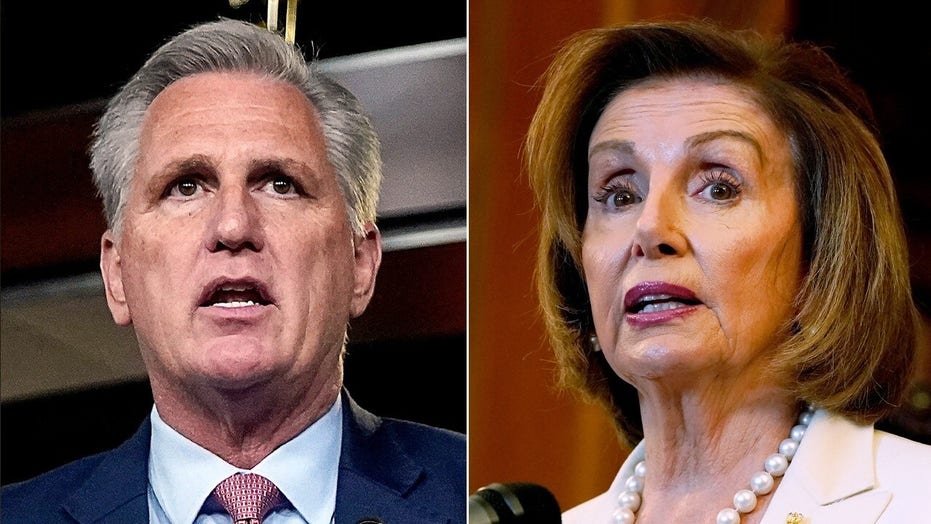 McCarthy took the shots at his former No. 3 in the House and the Illinois centrist after being asked about the commission while attending a Rose Garden event for the anniversary of the signing of the Americans with Disabilities Act.

The top Republican in the House pulled his three other picks for the committee after two of his choices – Reps. Jim Jordan, R-Ohio, and Jim Banks, R-Ind., both allies of former President Trump — were nixed by House Speaker Nancy Pelosi, D-Calif.

"Who is that? Adam and Liz? Aren’t they kind of like Pelosi Republicans?" McCarthy responded to a reporter from Just the News before the event.

McCarthy also responded "we'll see" when asked if the two Republicans on the Jan. 6 commission would be punished.

"I don’t talk about January 6th," McCarthy said when asked if he had spoken with former President Trump about the committee drama. "I spoke to the president."

Cheney called McCarthy’s comments "childish" when asked about them at the Capitol, according to The Hill. Kinzinger agreed with the former House Republican Conference chair.

"We're doing big things right now. We're getting to the answers of the worst attack on the Capitol since the War of 1812. He can call me any names he wants," Kinzinger said, according to The Hill.

"I’m a Republican. Kevin McCarthy is technically my Republican leader," he continued. "And to call, you know, members of Congress by childish names like Donald Trump used to do, I guess it's just kind of par [for the course]."

McCarthy blasted Pelosi last week after she blocked Banks and Jordan from joining the committee.

"Speaker Pelosi has taken the unprecedented step of denying the minority party's picks for the select committee on Jan. 6. This represents something that has not happened in the House before for a select committee, by the historian," McCarthy, said at a press conference.

"It's an egregious abuse of power. Pelosi has broken this institution. Denying the voice of members who have served in the military – Jim Banks, a Navy veteran who served in Afghanistan," McCarthy continued. "As well as a leader of a standing committee. Jim Jordan isn't ranking of just his first committee, he's done it before."

Pelosi insisted over the weekend there will be "no partisanship" with the commission.