In back-to-back press conferences, Pelosi and McCarthy delivered starkly contrasting accounts of the first public hearing in the impeachment inquiry, with both claiming their respective parties were fighting to protect the U.S. Constitution.

GOP REPS TO ZERO IN ON UKRAINE MEDDLING CLAIMS, AFTER DIPLOMATS STUMPED AT HEARING

“Democrats are showing great patriotism,” Pelosi, D-Calif., said Thursday, praising Schiff, D-Calif., for his “dignity and statesmanship.” “This isn’t about politics or anything political, it’s about patriotism, it’s about honoring our oath of office, and upholding the Constitution.”

She added: “This is something we do with a heavy heart. This is very prayerful, because impeachment is a divisive thing in our country.”

When asked whether bribery would be included as an article of impeachment, Pelosi replied: “We haven’t even made a decision to impeach. That’s what the inquiry is about.”

Minutes later, McCarthy, R-Calif., took the podium on the other side of the House, claiming it’s Republicans who are “standing up” for the Constitution.

“Are they doing this for political purposes or are they standing for the Constitution?” McCarthy said. “They came to Congress to impeach the president.”

McCarthy went on to blast Schiff, claiming he “has continued to lie to the American public.” 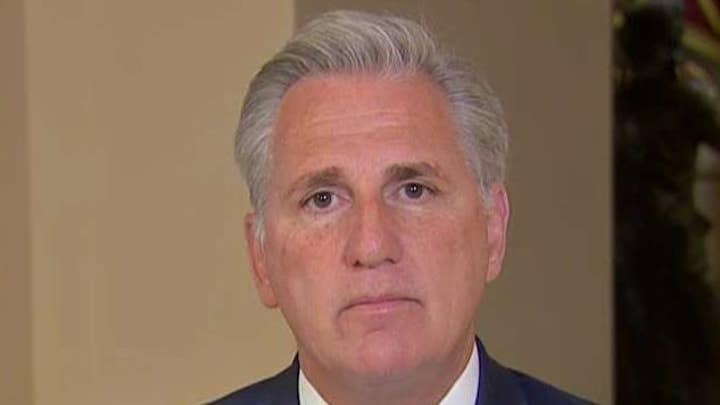 McCarthy outlined several instances where he believed Schiff had lied—including during the congressional Russia probe and when he “on purpose” delivered a parody reading last month of the transcript of Trump’s now-infamous July 25 phone call with Ukrainian President Volodymyr Zelensky, which is at the center of the impeachment inquiry.

That phone call prompted a whistleblower complaint to the Intelligence Community inspector general, and in turn, the impeachment inquiry in the House.

McCarthy also said that Schiff “lied again” when he claimed during the public hearing on Wednesday that he “didn’t know who the whistleblower was.”

During his attack of Schiff, McCarthy said he does “not think that Schiff is fit to be in the position to run the Intelligence Committee.”

“And yes, I do believe Schiff has spent his entire time in Congress, since the president has been in, trying to impeach him,” McCarthy said. “He’s already written the script and he’s trying to fill it in—he’s been auditioning witnesses in the basement.”

Meanwhile, up next on Friday in the public phase of the impeachment inquiry is former U.S. Ambassador to Ukraine Marie Yovanovich, with a number of other hearings with current and former top officials scheduled for next week.