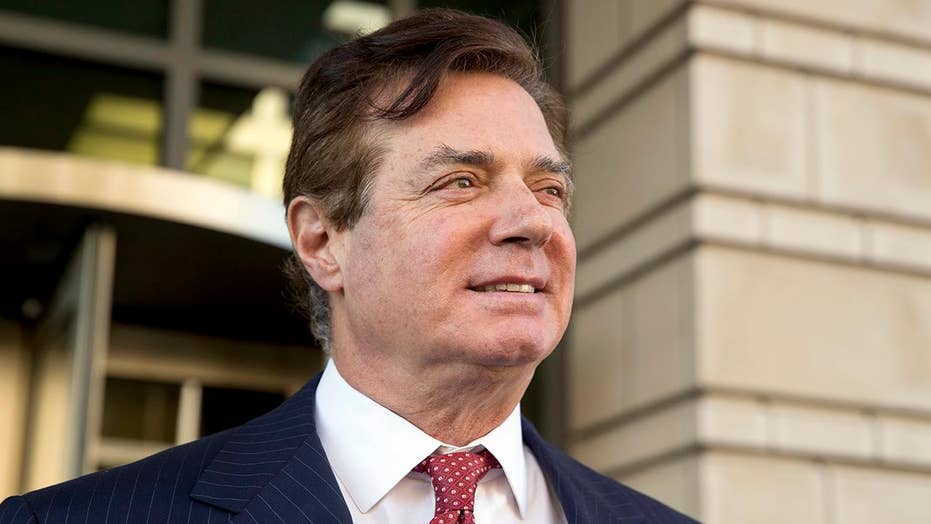 Why did Paul Manafort waive the right to appeal his sentence?

Former Department of Justice prosecutor James Trusty says it is not uncommon in plea agreements for the defendant to waive their right to appeal a sentence.

Former Trump campaign chairman Paul Manafort was transferred to a federal prison in New York City late Monday ahead of his pending state court trial -- but only after the Justice Department rejected a local district attorney’s reported bid to move him to the notorious Rikers Island prison complex.

Manafort was instead transferred to the New York Metropolitan Correctional Center (MCC), a federal detention facility located in Manhattan.

PAUL MANAFORT NOT GOING TO RIKERS ISLAND, WILL REMAIN IN FEDERAL CUSTODY AFTER DOJ REJECTS MOVE

MCC houses many inmates awaiting trial or sentencing. Among the current inmates are terror suspect Sayfullo Saipov, who allegedly ran down pedestrians with a truck in New York on Oct. 31, 2017, and Cesar Sayoc, the man who allegedly sent package bombs to prominent Democrats. Joaquin Guzman, the notorious drug lord known as “El Chapo,” is reportedly being held at the facility.

A senior Justice Department official told Fox News that Manafort’s attorneys contacted the Bureau of Prisons and “raised concerns about his transfer to state custody related to his health and personal safety.”

The official added that Manafort “will be made available to the state whenever needed for his state case,” and that the “arrangement” would not have “any impact” on the state proceedings.

According to the Bureau of Prisons, Manafort’s release date is set for Dec. 25, 2024.

“No one is beyond the law in New York,” Vance said in a statement in March. “Following an investigation commenced by our office in March 2017, a Manhattan grand jury has charged Mr. Manafort with state criminal violations which strike at the heart of New York’s sovereign interests, including the integrity of our residential mortgage market.”

Fox News first reported this month that a New York State judge ordered Manafort’s transfer to Rikers Island at Vance’s request. However, because Manafort has been convicted on federal charges, any attempt to move him out of federal custody must be approved by Rosen. On Monday, Rosen denied the attempt, effectively keeping Manafort in federal custody.

“There’s no reason for [Manafort] to go to Rikers,” a source close to the case told Fox News. “He can go to his New York initial appearance and then return to federal custody.”

But in a newly obtained letter from Vance to Rosen dated June 14, along with supporting materials, Vance stated that his “office has never taken the position that Mr. Manafort should be housed at Rikers Island (as opposed to another state or federal facility in New York), or that he be placed in solitary confinement.”

Rikers Island is the famous jail near Laguardia airport. It has been the holding facility of some of the most high-profile violent criminals in the city, including David Berkowitz, the Son of Sam; and Mark David Chapman, the man who killed John Lennon.

But Vance’s reported effort to have Manafort sent to Rikers attracted immediate criticism, including from prominent liberals and progressives.

"It is yet another example of the weaponization of the criminal process for partisan advantage," defense attorney Alan Dershowitz wrote in an opinion piece for Fox News. The Harvard Law professor emeritus suggested that Manhattan prosecutors may have been putting Manafort through tough conditions intentionally in order to prod him to work with them as state officials investigate President Trump.

Responding to reports that Manafort would be held in solitary at Rikers, Rep. Alexandria Ocasio-Cortez, D-N.Y., likened the move to "torture."

For now, Manafort is expected to await his state trial at MCC.

Manafort, in March, was sentenced in federal court to nearly seven years in prison in connection with his guilty plea related to foreign lobbying and witness tampering. Manafort also pleaded guilty to committing various financial crimes, including tax fraud and failing to register under the Foreign Agents Registration Act (FARA) regarding his foreign lobbying on behalf of Ukraine.

Separately on Monday, the Supreme Court upheld a constitutional rule that allows state and federal governments to prosecute someone for the same crime, a closely watched case because of its potential implications for people prosecuted in the Russia investigation, including Manafort.

The court's 7-2 decision Monday preserves a long-standing rule that provides an exception to the Constitution's ban on trying someone twice for the same offense.

Fox News' Marta Dhanis, Gregg Re, Ronn Blitzer, and The Associated Press contributed to this report.