Kavanaugh confirmation fires up voters ahead of midterms

Both Republicans and Democrats think their candidates will be helped by the bitter confirmation battle over Supreme Court Justice Brett Kavanaugh; reaction and analysis on 'The Five.'

Less than a month after the confirmation of Associate Justice Brett Kavanaugh entrenched a 5-4 conservative majority on the Supreme Court, leading law professors are urging Democrats to expand the size of all of the nation's federal courts and pack them with liberals.

Harvard professors Mark Tushnet and Laurence Tribe are lending their support to the so-called "1.20.21 Project," which was launched by political science professor Aaron Belkin on Wednesday to counter "Republican obstruction, theft and procedural abuse" of the federal judiciary.

That rhetoric reflects the professors' apparent surprise after Democrats lost the 2016 presidential election, which they had hoped would allow the party to continue appointing liberal judges and justices. In 2016, when Hillary Clinton was leading in all major polls in her bid for the presidency, Tushnet definitively declared in a blog post that conservatives were the "losers in the culture wars."

He wrote that liberal judges who "no longer have to be worried about reversal by the Supreme Court" could be useful in marginalizing those Republican "losers," whom he compared to the defeated Japanese in World War II or the Confederacy in the Civil War.

The heated language also highlights what liberals have characterized as the unfair treatment of President Obama's failed nominee to the Supreme Court, Merrick Garland. In 2016, Senate Majority Leader Mitch McConnell, R-Ky, refused to hold a hearing or vote on Garland, saying a lame-duck president shouldn't be able to appoint a justice in an election year. Garland didn't have enough support in the GOP-held Senate to win confirmation. 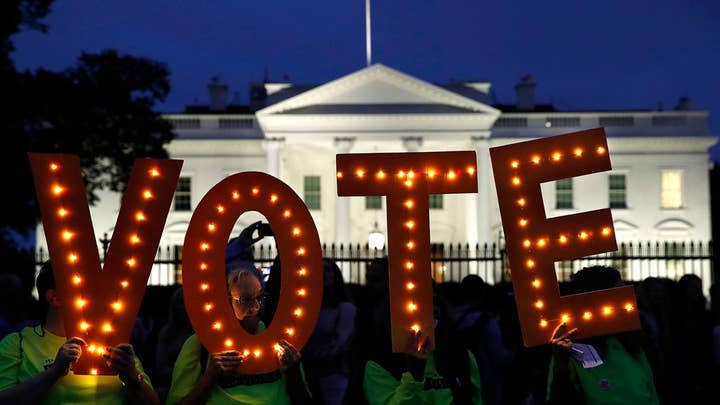 At Kavanaugh's ceremonial swearing-in ceremony earlier this month, President Trump led a standing ovation for McConnell, whom he called a "great" leader who has done an "incredible job for the American people." Under McConnell and Trump, Republicans have now confirmed 26 federal appellate judges and two Supreme Court justices. (Kavanaugh's rise to the Supreme Court creates a new vacancy on the influential D.C. Circuit Court of Appeals, where he had served for 12 years.)

That fast pace of conservative judicial appointments has upended and frustrated some of the assumptions of liberal law professors like Tushnet, who wrote just two years ago: "Right now more than half of the judges sitting on the courts of appeals were appointed by Democratic presidents, and – though I wasn’t able to locate up-to-date numbers – the same appears to be true of the district courts."

Left-wing academics have long floated the possibility of flooding the bench with Democrats, although the 1.20.21 Project is their most organized effort to date. For example, another leading law professor, Indiana Unversity's Ian Samuel, wrote on Twitter as soon as then-Associate Justice Anthony Kennedy announced his retirement in June that Democrats should "[p]ack the courts" as urgently as they should "abolish ICE."

Samuel went on to dismiss counterarguments that if Democrats ever successfully stack the court, Republicans will further stack the court when they retake Congress, eroding the Supreme Court's legitimacy.

"That makes sense until you remember: didn’t the Republicans already adjust the size of the court (shrinking it to eight, by refusing to consider Judge Merrick Garland’s nomination) when they had the power to do it?" Samuel told Fox News.

"And if, in a decade, the right did further expand the court and take back control of it … how would that leave the left in any position that’s worse than now?" he continued. "This objection ('what if they retaliate?!') feels, in present circumstances, a bit like worrying that if the Allies invade Normandy, the Nazis will shoot at them."

The latest effort underscored the intensely left-leaning politics of most of the nation's academia. During Kavanaugh's confirmation process, thousands of progressive law professors signed a letter saying Kavanaugh's temperament during Senate Judiciary Commitee hearings in September was disqualifying. Kavanaugh forcefully denied the uncorrobroated attempted rape and other sexual misconduct accusations against him.

And Tribe, who has accused President Trump of "orchestrating a massive cover-up" that is "worse" than anything done by former President Richard Nixon, is himself no stranger to partisan politics. In 2015, a piece in The New Yorker by law professor Tim Wu asked, "Did Laurence Tribe Sell Out?" The article noted that "it would ... be foolish to ignore the inherent tension in searching for truth while also working for paying clients," as Tribe does.

While there is no constitutionally fixed number of federal appellate or Supreme Court justices, the plan to pack the courts would require changes to federal law, meaning that Democrats would have to retake Congress and the presidency to see it through.

The proposal is not without precedent. In 1937, then-President Franklin D. Roosevelt, frustrated by the Supreme Court's objections to his New Deal policies, threatened to pack the Supreme Court -- a proposal that failed after Associate Justice Owen Roberts bowed to the White House's pressure and began supporting its initiatives.

But Tribe insisted this new plan is different. Roosevelt was unhappy with high court decisions that were blocking New Deal legislation, but the new push for a larger court stems from Republican actions, not the court's decisions, Tribe said.

"The time is overdue for a seriously considered plan of action by those of us who believe that McConnell Republicans, abetted by and abetting the Trump Movement, have prioritized the expansion of their own power over the safeguarding of American democracy and the protection of the most vulnerable among us," Tribe said.

Belkin, who launched the 1.20.21 Project, did not immediately respond to Fox News' request for comment.