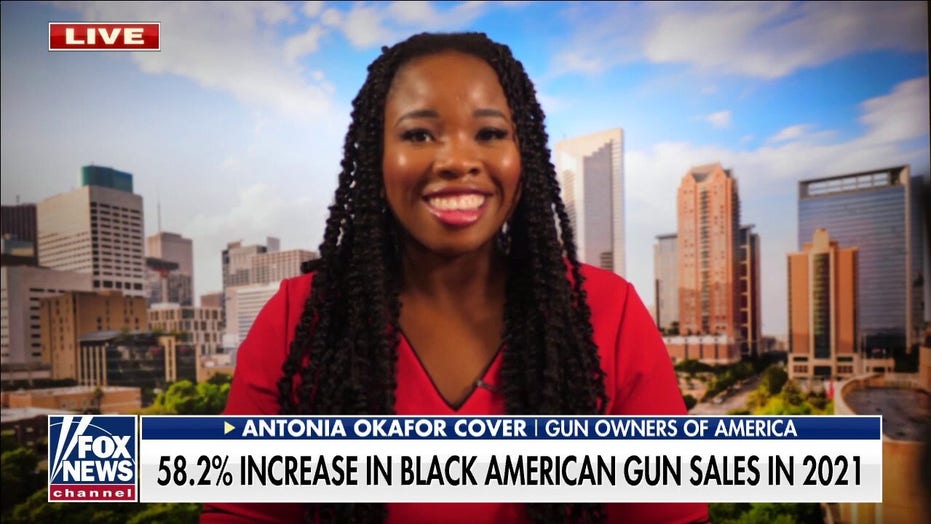 Black Americans' gun purchases in 2021 increase more than 58%. Atonia Okafor Cover, national spokesperson for Gun Owners of America, argues the U.S. should be 'pushing equality through the 2nd Amendment.'

Shortly after news broke of a shooting inside a Dallas-area high school, liberal influencers demanded stricter gun control measures, even though Texas Gov. Greg Abbott explained that current state law prohibits an 18-year-old adult like the suspect from owning or purchasing the firearm in question.

Arlington, Texas police cited a student's cell phone video, which showed that a fight broke out inside a classroom at Timberview High School early Wednesday before 18-year-old Timothy George Simpkins allegedly opened fire. The suspect "turned himself in with an attorney," and police recovered a .45-caliber gun along the road about 2 miles from the school.

The suspect injured at least three people, and one victim remains in critical condition.

A new Texas open carry law, which went into effect on Sept. 1, applies only to those aged 21 and older. Only those 21 and older can legally own a handgun in Texas, and guns are banned from school property, except in certain circumstances.

Actor George Takei, best known for his role as Sulu on "Star Trek," broadcast his "anger" at Texas Republicans to his 3.2 million followers.

"Another school shooting, this one in Texas, multiple victims reported," Takei noted. He expressed condolences to the victims, then added, "My anger goes out to the Texas GOP and their Governor who enacted open carry and promote a culture of guns and violence."

Shannon Watts, founder of Moms Demand Action for Gun Sense in America, suggested that Texas lawmakers share blame for the shooting. "Earlier this year, Texas lawmakers further weakened the state's gun laws by passing permitless carry to allow people to carry hidden, loaded handguns in public with no background check or safety training," she tweeted to her 500,000 followers.

The Nation's Elie Mystal, who has nearly 300,000 followers on Twitter, claimed that "Texas ended its gun licensing laws making it immeasurably easier for a student to get access to a gun."

Gun control activist Fred Guttenberg, who tragically lost his 14-year-old daughter in the Marjorie Stoneman Douglas High School shooting in 2018, claimed that under Gov. Abbott, "laws were passed making it easier for anyone to [sic] in Texas to have a gun and commit gun violence, even in a school." He urged his 400,000 followers to focus on gun control in addition to the abortion issue in Texas.

Progressive political news host Brian Tyler Cohen also cited the open carry law in a tweet to his 400,000 followers. He responded to news about the shooting with this message: "Texas Republicans made it easier for everyone to carry guns starting September 1."

Mother Jones Senior Reporter Ari Berman also suggested the open carry law was tied to the shooting. He responded to reports of the shooting with this message: "3,600 gun deaths a year in Texas but GOP passed [a] law this year allowing you to carry [a] gun without training or permit."