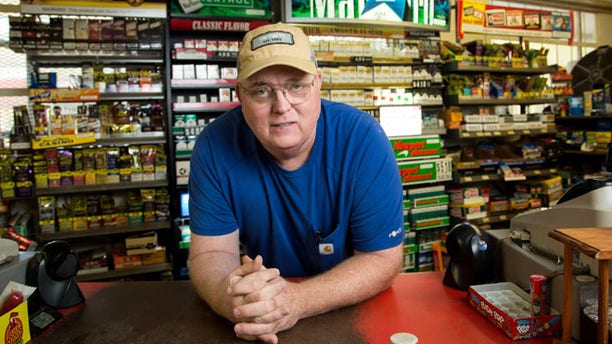 Businessman Lyndon McLellan stands in front of his store L&amp;M Convenience Mart in Fairmont, N.C. (The Institute for Justice)

When federal agents stormed into Lyndon McLellan's North Carolina convenience store last October without warning and accused him of trying to put one over on the government, the small business owner wasn't sure what was happening.

"They asked me if I knew what 'structuring' was and then they showed me some cash deposits I made in a 24-hour period," he told FoxNews.com.

The IRS agents apparently were suspicious because of deposits McLellan had made of just under $10,000. Banks are required to report transactions over $10,000; making multiple deposits of less than $10,000 to evade that requirement is known as "structuring."

Under this pretense, enforcement agents accused McLellan of the con and seized all $107,000 from his bank account.

"It leaves you numb," McLellan told FoxNews.com. "I was in a state of shock."

McLellan is one of many business owners who have been caught up in a controversial federal practice known as civil forfeiture. Under this policy, federal agents have been able to seize the property and bank accounts of anyone they suspect of having criminal ties. The burden of proof falls on the owner even if no charges are filed.

What's unique in McLellan's case is that he's still battling to get his money back, despite the IRS pledging late last year to pull back on its use of civil forfeiture -- and despite even the IRS commissioner suggesting agents erred in locking down his money.

In an instant, his business account was gone. And then it got worse.

Rumors quickly spread in the tiny town that McLellan's money was frozen because of suspected ties to drugs, fraying the good reputation he'd spent years building in the community.

"Several people thought it was drug-related but when I told them what really happened they said, 'How in the world can they take your money?' That's the answer I've been waiting on too," he said.

McLellan claims he didn't do anything wrong. The IRS has never alleged he committed a crime nor has the agency brought any criminal charges against him. Instead, McLellan, 50, was verbally accused of structuring cash deposits to avoid bank reporting requirements, under a measure originally meant to target drug dealers, terrorists and others trying to launder money through criminal activity.

From 2005 to 2012, the IRS seized more than $242 million from alleged structuring violations in more than 2,500 cases, according to an Institute for Justice study. In more than 830 of those cases, no other criminal activity was alleged.

In many civil forfeiture cases, the government will make a deal with the owner where he or she will agree to turn over half their money seized in order to get a lengthy and costly legal fight to go away. But the practice has come under intense congressional and media scrutiny.

Under pressure, the IRS last October said it would no longer go after structuring cases unless the money in question could be tied to some other illegal activity. The DOJ changed its policy in March. The problem, though, is that the new policy isn't retroactive, meaning McLellan might still have to pay up.

Robert Johnson, a lawyer with the Institute for Justice which represents McLellan, told FoxNews.com that the policy changes from the IRS are a "positive development" but says what's needed is binding reform from Congress.

"There have been a number of cases where the IRS has continued to apply structuring laws despite the new policy," Johnson said, adding that his group has recently litigated two in Michigan and one in Iowa.

At a February 2015 hearing before the U.S. House of Representatives Ways and Means Oversight Subcommittee, Rep. George Holding, R-N.C., mentioned to IRS Commissioner John Koskinen that he had reviewed McLellan's case -- though he did not specifically name it.

"If that case exists, then it's not following in the policy I've been advised," Koskinen testified, adding that he had "lengthy meetings with the senior leadership" of the IRS's criminal investigation division and was assured that employees were trained in and advised about the new policy.

But that seems to be news to small business owners who, like McLellan, say the government still is holding their bank balances hostage.

"If I've done wrong, penalize me, but you don't have to take everything a person's got," said McLellan, who still has not seen a dime of the $107,000 the government seized.

When contacted, an IRS spokesman told FoxNews.com that "federal privacy laws prohibit the IRS from commenting on any individual taxpayer or case."