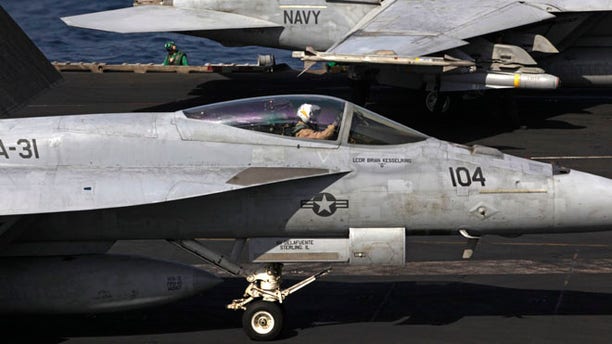 Defense hawks on both sides of the aisle are pointing to the new war against the Islamic State to revive efforts to roll back across-the-board Pentagon budget cuts.

Rather, they argue, the Islamic State, or ISIS, is just the latest threat that underscores the need to undo the $487 billion in automatic Defense spending cuts required under the 2011 Budget Control Act.

“Even before these things erupted, it was not adequate,” Sen. Jim Inhofe, R-Okla., said of Pentagon funding at a Senate Armed Services Hearing earlier this week. “As we all know, risk increases when adequacy is not met.”

The Oklahoma Republican was pressing Defense Secretary Chuck Hagel and Joint Chiefs of Staff Chairman Gen. Martin Dempsey on whether the Defense Department has enough money to carry out Obama’s goal of destroying ISIS. While the Obama administration has requested an additional $500 million to pay for arming and training Syrian rebels, more than a month of airstrikes against the terror group have already cost hundreds of millions of dollars.

The fact the administration wants to expand operations has fueled renewed worries over Defense funding, including among those who support the White House’s proposed strategy.

“I am troubled by the hit that readiness has taken through some of the budget cuts,” Senate Armed Services Committee Chairman Carl Levin, D-Mich., told the Council on Foreign Relations last week, adding that while lawmakers have had some success restoring the funding, “the whole sequestration decision, looking back at it, was wrong.”

Beyond the task of fighting ISIS, crises like the Ebola pandemic in West Africa -- where U.S. military personnel are being deployed -- and the armed struggle in eastern Ukraine have military officials joining lawmakers in sounding the alarm.

Though top Democrats and Republicans have called for “fixing” the Defense portion of the sequester by reallocating federal dollars, the cuts themselves were the product of a congressional vote to drastically rein in spending — a reality many believed would never come to pass. Congress last year approved a bipartisan, two-year budget outline that provided some relief to the Pentagon.

Of course, Congress has other avenues it could use to appropriate money to the department, including war-fighting funds. But those efforts, along with what Hagel hinted would be a more robust budget request for fiscal 2016, are sure to encounter resistance among deficit-minded members intent on shrinking federal spending.

Sen. Jeff Sessions of Alabama, the top Republican on the Senate budget panel, told Politico this week he’s not prepared to say “we’ve got to obliterate the sequester” to deal with the new threats. “We lived with the Budget Control Act numbers last year,” he said. “We’ve lived with them this year, and savings that the Defense Department was then executing are just now being harvested.”

For now, those eyeing a re-upping of the Pentagon budget are hoping polls that show public opinion surging in favor of striking ISIS -- coupled with bipartisan backing of the administration's initial request for $500 million to train and equip Syrian rebels -- will lay the groundwork for rethinking the Defense sequester before the next round of cuts kicks in.