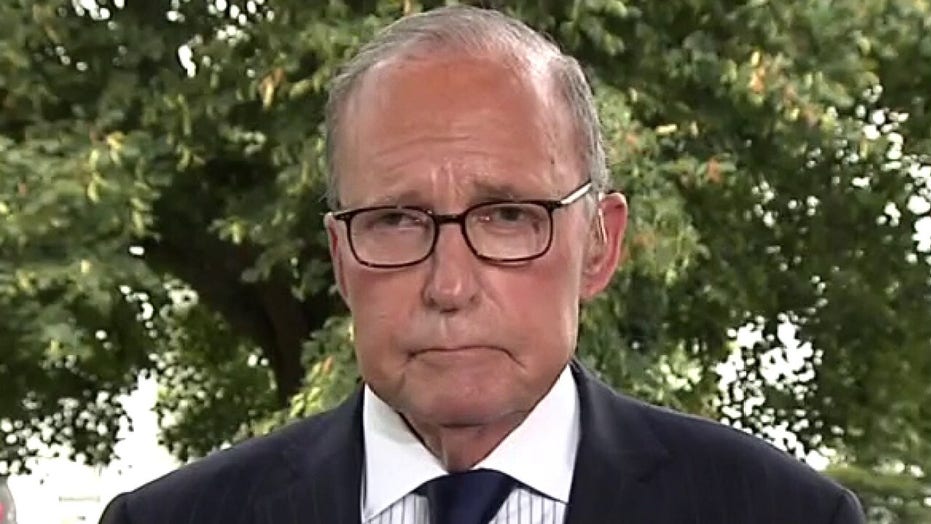 Kudlow argued that Trump's agenda of deregulation and tax cuts boosted the American economy before the COVID-19 pandemic and added that the country was seeing a "V-shaped recovery."

"This will be a self-sustaining economic recovery with very big numbers in Q3 and Q4," he said.

Kudlow added that by imposing higher taxes, Biden and running mate Kamala Harris may end up hurting America's ability to recover from the economic impact of the coronavirus.

At one point, host Neil Cavuto had asked Kudlow about Biden's pledge to make the economy more fair as president.

"What I make of that is higher taxes," Kudlow answered. "It's very clear the other team is going to raise taxes. It's in their policy book. We're looking at at least a $3 trillion tax increase. You know, I would just say, Neil, I'm not the political guy, I'm the policy guy. If you're in or coming out of a pandemic contraction such as we have experienced -- brutal, difficult, heart-breaking stuff -- you don't want to be raising taxes."

Both Biden and Harris have pledged to repeal President Trump's massive corporate tax cuts and proposed the type of programs that conservatives speculate will lead to higher taxes.

"I mean, it's like, 'Where are the Keynesians now that we need them?' A self-respecting Keynesian would say spend more and tax less. And that team -- [the] Biden team -- is talking about, yeah they are going to spend a lot more but they're also going to tax a lot," Kudlow said.

Biden has indicated he would focus individual tax hikes on high-income earners, pledging not to raise taxes on anyone making less than $400,000 per year.