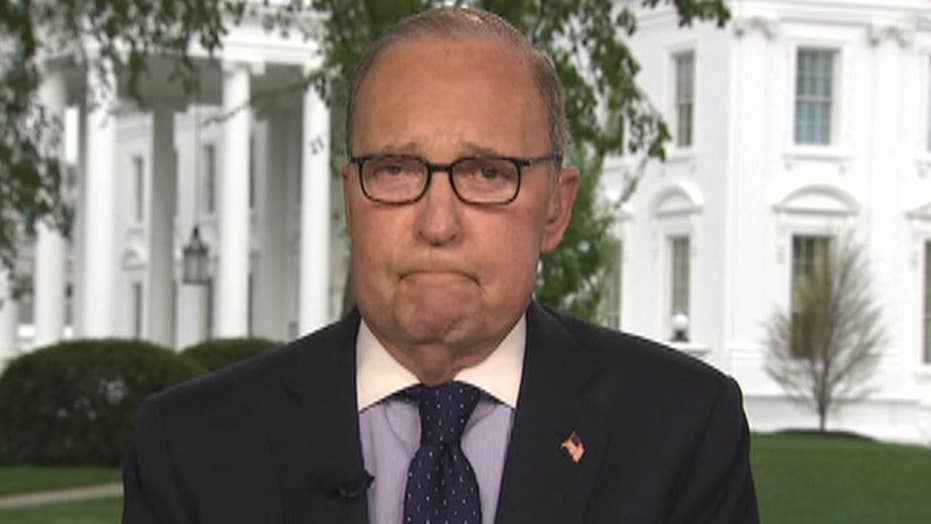 “We've been booming, absolutely booming. The economy is growing, unemployment is down, blue-collar wage earners are growing faster than their white-collar counterparts, women have reentered the labor force, profits are significant,” Kudlow said. “There are so many good things we could talk about.”

This year, Tax Day is the first time that tens of millions of Americans get to see on paper the impact of the Trump tax cuts.

CHARLIE KIRK: HAPPY TAX DAY? IT IS UNLESS YOU'RE A DEMOCRAT

The “Tax Cuts and Jobs Act” (TCJA) was passed into law in December of 2017 and went into effect at the beginning of 2018. It passed on a very strict party-line vote basis, with Democrats universally objecting to it.

Some of the key highlights for individuals that went into effect are: five of the seven marginal tax brackets had the tax rate reduced, the standard deduction was effectively doubled for each type of filer, the ObamaCare mandate was repealed, and the child tax credit was doubled.

KUDLOW: US ECONOMY HOTTEST IN WORLD

On “Fox & Friends,” Kudlow was asked to explain why the president’s selections for the Federal Reserve board, Stephen Moore, a conservative economic analyst and frequent critic of the Fed, and former Republican presidential candidate Herman Cain caused such a “ruckus,” referring to the headline of a USA Today article published Monday.

“You know President Trump, first of all, he’s a disruptor. He wants to add some new blood to the Fed,” Kudlow responded.

He added: “They (Moore and Cain) believe that faster economic growth and lower unemployment, which is what we've had because of the new tax incentives and the regulatory rollback and the opening up of energy and the trade reforms. So what? We picked up growth by a percent to three, unemployment is down, it’s been below 4 percent, wages are rising.

"Now, they do not believe that causes inflation. That's a key point. Conventional economists, many of whom work at the Fed, seem to believe too many people working and prospering and succeeding is bad. All right? So our guys, these nominees have a completely different view. It's common sense, is it not? Let me ask you, too many people working is that good or bad?”

Kudlow called Moore and Cain “unconventional appointments” and went on to explain in greater detail part of the logic behind the decision to appoint them.

“Is faster growth better than slower growth? The answer is yes. Should you raise interest rates just because you have supply-side tax cuts and a booming business investment and the hottest economy in the world? The answer is no,” said Kudlow adding that “we’ll see what happens with them.”