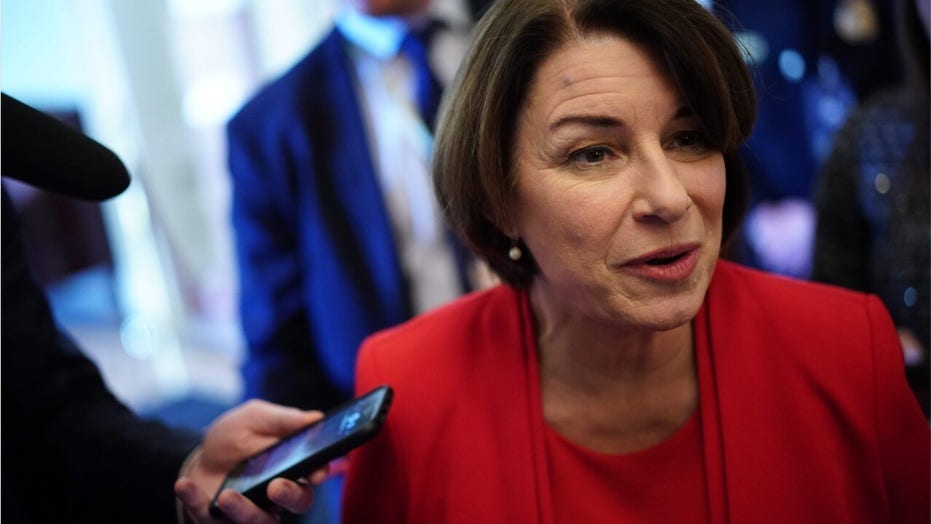 Klobuchar is 5 feet 4 inches tall. Jefferson was among the tallest U.S. presidents standing at 6 feet 2 inches.

IN UNEARTHED 2006 CLIP, KLOBUCHAR CALLED FOR FENCE, ‘ORDER’ AT THE BORDER

Bloomberg is 5 feet 7 inches, according to his medical records.

“I am the only one that is truly 5 foot 4,” Klobuchar said in the interview that aired Friday.

But then Maher chimed in with an incorrect statement: “Thomas Jefferson was 5 foot 4."

Klobuchar pointed at the HBO host in agreement: “Exactly!”

“There is a president that was 5 foot 4. Jefferson,” Klobuchar said.

The real president who was that short was Founding Father James Madison.

The gaffe was surprising for Klobuchar because she’s fond of bringing up Madison’s height in her campaign pitch to voters that you don’t need to be the tallest to win the White House.

Her comparison to Madison was one of her stand-out moments on the debate stage in Iowa on Jan. 14 in countering critics who think a woman can't win.

The blunder comes on the heels of another gaffe where Klobuchar and fellow candidate Tom Steyer couldn’t name the president of Mexico in separate televised interviews Thursday with Spanish-language station Telemundo.

Klobuchar had a strong third-place finish in New Hampshire on Tuesday and has picked up support from more centrist-minded voters as former vice president Joe Biden’s campaign collapsed in the two early-voting states.

Maher ended the interview with a doomsday question for the candidate: What happens if Trump loses, but refuses to leave office and has the support of the military and police to stay – “the ones with guns.”

Klobuchar expressed optimism that Trump would lose big and the people would be on her side.

“We have always had a peaceful transition of power in this country,” Klobuchar said.

“Always have had, correct. We are now in a different world,” Maher countered.

Then Klobuchar made another case for her electability: “Every single Republican that I’ve run against, in my entire career, has left politics for good and never returned.”