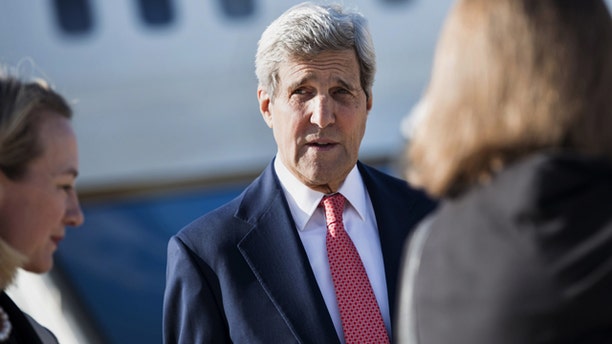 With a new Iraqi government finally in place and a growing Mideast consensus on defeating insurgent threats, U.S. Secretary of State John Kerry arrived in Baghdad Wednesday to press Iraq's Shiite leader to quickly deliver more power to wary Sunnis -- or jeopardize any hope of defeating the Islamic State group.

Kerry landed in the Iraqi capital just two days after newly sworn Prime Minister Haider al-Abadi seated his top government ministers, a crucial step toward restoring stability in a nation where security has spiraled out of control since the beginning of the year.

The trip marks the first high-level U.S. meeting with al-Abadi since he become prime minister, and it aimed to symbolize the Obama administration's support for Iraq nearly three years after U.S. troops left the war-torn country. But it also signaled to al-Abadi, a Shiite Muslim, that the U.S. was watching to make sure he gives Iraqi Sunnis more control over their local power structures and security forces, as promised.

Al-Abadi's predecessor, former Prime Minister Nouri al-Maliki, for years shut Sunnis out of power and refused to pay tribal militias salaries or give them government jobs -- and in turn sowed widespread resentment that Islamic State extremists seized on as a recruiting tool.

State Department spokeswoman Jen Psaki said Kerry will "meet with Iraqi government officials to welcome them on the successful formation of a new government." She said officials also will "discuss how the United States can increase its support to Iraq's new government in our common effort to defeat ISIL and the threat that it poses to Iraq, the region, and the world." ISIL is an alternative name for the militant group.

Kerry's trip comes on the eve of a meeting in Jeddah, Saudi Arabia, where he and Arab leaders across the Mideast will discuss what nations can contribute to an ever-growing global coalition against the Islamic State. The U.S and nine other counties -- Canada, Australia and across Europe -- agreed last week to create a united front against the mostly Sunni extremist group that has overrun much of northern Iraq and Syria. Thursday's meeting in Jeddah seeks to do much of the same and will gage the level of support from the Sunni-dominated Mideast region. Kerry also was to visit Jordan.

Officials hope to have a strategy blueprint against the Islamic State, backed up with specific steps nations are willing to take, by the opening of the annual meeting of the United Nations General Assembly in New York at the end of the month. President Barack Obama was expected to discuss U.S. commitments in a televised address Wednesday from the White House.

White House officials said Tuesday that Obama will ask Congress to quickly authorize the arming and training of Syrian opposition forces but will press forward without formal sign-off from lawmakers on a broader military and political effort to combat the Islamic State group.

The president's broader strategy could include more wide-ranging airstrikes against targets in Iraq and possibly in Syria, and hinges on military and political commitments from allies in Europe, the Middle East and elsewhere.

The U.S. already has launched about 150 airstrikes on Islamic State militants in Iraq over the past month, a mission undertaken at the invitation of the Iraqi government and without formal authorization from Congress. And it has sent military advisers, supplies and humanitarian aid to help Iraqi national troops and Kurdish forces beat back the insurgents. It was not clear what, if any, military action Obama would be willing to take in Syria, where he has resisted any mission that might inadvertently help President Bashar Assad and his government in Damascus, which has so far survived a bloody three-year war against Sunni rebels. Obama has ruled out putting U.S. combat troops on the ground.

Peter Neumann, a leading terrorism expert at Kings College London, this week estimated that more than 12,000 foreigners from 74 counties -- including about 100 Americans -- have gone to Syria to fight with Sunni rebel groups, including the Islamic State. It was not clear how many of them have joined the Islamic State as opposed to moderate rebel fighters or even other extremists.

How to dry up foreign funding for the Islamic State would also be a key priority at the conference, said a senior U.S. official, as well as countering insurgent propaganda that uses an extremist view of Islam to attract religious recruits. The official briefed reporters under ground rules that he would not be identified.

But much of the attention at the Jeddah meeting will be on how much military support nations are willing to send to Iraq and moderate Sunni rebels in Syria. That could include intelligence and supplies, and use of deadly force, including airstrikes.

The senior U.S. official said al-Abadi has promised to create a national guard of local fighters to secure each of Iraq's 18 provinces, each of which is run by a governor. That would ensure that the Iraqi Army and its mostly Shiite force would not be in charge of security in Sunni regions. In doing so, that would bring salaried jobs, government pensions and other benefits to areas of Iraq that for years largely were snubbed under al-Maliki's eight years in power.