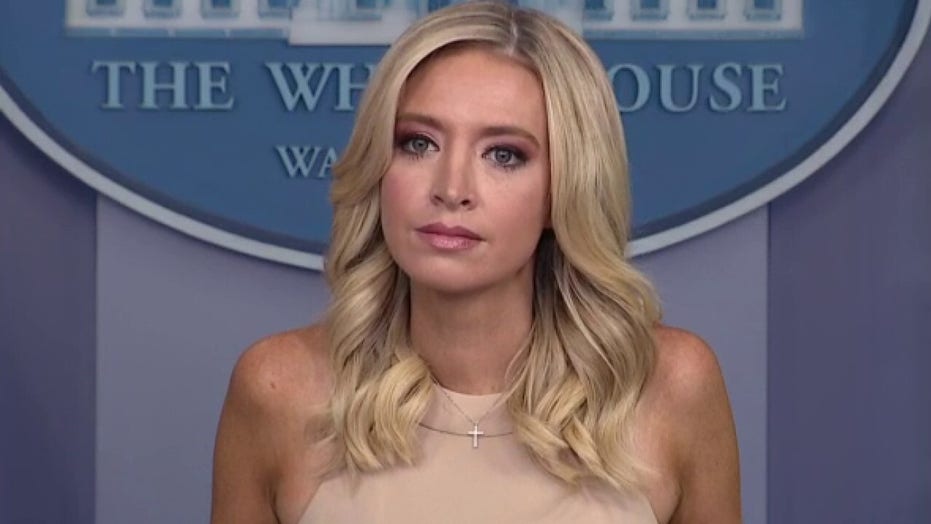 During Tuesday's press briefing, McEnany was asked why the president doesn’t read his President’s Daily Brief (PDB), after reports Russia was paying Taliban militants to kill U.S. soldiers was included in one of them. Trump has insisted he had no prior knowledge of the matter.

The PDB is a document produced each day for the president containing the government’s latest secrets regarding national security.

“The president does read,” McEnany shot back. “The president is the most informed person on planet Earth when it comes to the threats that we face."

On Monday, a senior Republican who was one of eight Republicans briefed in the Situation Room on Russian bounty reports told NBC News that the intelligence may have been in a PDB at some point but the president was not given a formal threat briefing because the threat wasn’t yet “actionable.”

"I believe it may have been” in the PDB, Rep. Michael McCaul, R-Texas, said.

Referring to the president, McCaul said: "I think the way the process works is that he gets briefed about three times a week on sort of actionable, credible items. And the decision was made that this was not at that point in time a credible, actionable piece of intelligence. And if at any point it did, it would be raised to his attention."

The New York Times, citing two officials familiar, reported Monday that the Russian bounty intelligence had been included in a February PDB given to the president. The Times was the first to report that a Russian military unit offered to pay Taliban-linked militants to kill coalition forces in Afghanistan, including American troops, citing officials briefed on the matter.

McEnany has repeatedly insisted the president did not receive a briefing on the Russian bounty possibility because there was no consensus on its validity. She added that Trump has since been briefed due to the Times publicizing the issue.

The press secretary also hit the Times for publishing the leak from an anonymous intelligence officer, saying there is “no good scenario” as a result of the report.

“Who’s going to want to cooperate with the United States intelligence community? Who’s going to want to be a source or an asset if they know that their identity could be disclosed? Which allies will want to share information with us if they know that some rogue intelligence officer can go splash that information on the front page of a major U.S. newspaper?” McEnany said.

She added that because of the Times’ reporting, it will be more difficult to come to a consensus and verify the intelligence. “This level of controversy and discord plays directly into the hands of Russia and unfortunately serves their interests,” she said.

She said that leaks of classified information have been “targeted” against Trump, noting that under former President Obama, there were just 39 criminal leak referrals to the Department of Justice. Under Trump, there have been an average of 104 per year.