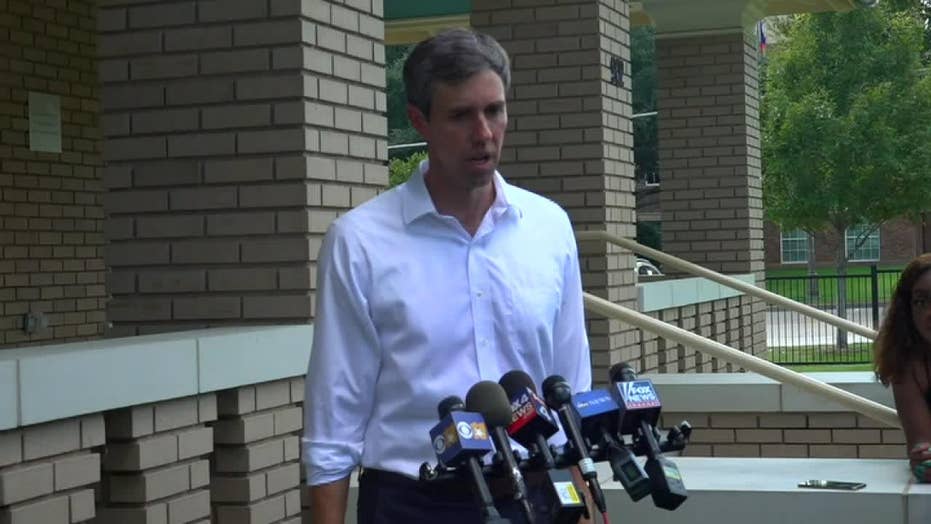 Update, 10:00 p.m. ET: The New York Times has revised its story to include the fact that several friends of the alleged victim said she told them she did not recall the supposed sexual assault in question. The major revision to the Times' reporting came several hours after various politicians, including virtually all major 2020 Democratic candidates for president, cited the Times' reporting as a reason to impeach Kavanaugh. Full story here.

The revitalized, longshot push to get Kavanaugh removed from the high court comes as Democrats' apparent effort to impeach President Trump has largely stalled. Trump, for his part, suggested Sunday that Kavanaugh should sue for defamation. 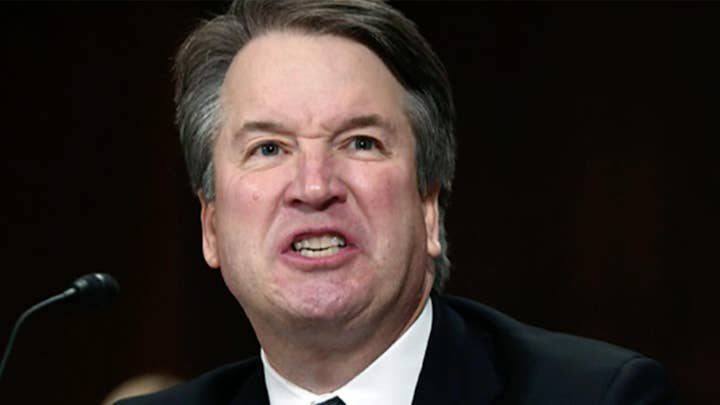 However, the Times' article also conspicuously did not mention that Pogrebin and Kelly's book found that the female student in question had denied any knowledge of the alleged episode.

"The book notes, quietly, that the woman Max Stier named as having been supposedly victimized by Kavanaugh and friends denies any memory of the alleged event," observed The Federalist's Mollie Hemingway. "Seems, I don’t know, significant."

The book reads: "[Tracy] Harmon, whose surname is now Harmon Joyce, has also refused to discuss the incident, though several of her friends said she does not recall it."

This undated photo provided by Safehouse Progressive Alliance for Nonviolence shows Deborah Ramirez. Ramirez went public with allegations that while in his first year at Yale University, Supreme Court Justice nominee Brett Kavanaugh placed his penis in front of her and caused her to involuntarily touch it during a drunken dormitory party. Kavanaugh denied the accusation. (Safehouse Progressive Alliance for Nonviolence via AP)

"Omitting these facts from the @nytimes story is one of worst cases of journalistic malpractice that I can recall," wrote the National Review's Washington correspondent, John McCormack on Twitter.

McCormack wrote separately: "If Kavanaugh’s 'friends pushed his penis,' then isn’t it an allegation of wrongdoing against Kavanaugh’s 'friends,' not Kavanaugh himself? Surely even a modern liberal Yalie who’s been to one of those weird non-sexual 'naked parties' would recognize both the female student and Kavanaugh are both alleged victims in this alleged incident, barring an additional allegation that a college-aged Kavanaugh asked his 'friends' to 'push his penis.'"

"False Accusations without recrimination. When does it stop?"

Nevertheless, Democrats announced a new effort to topple Kavanaugh. Hawaii Democratic Sen. Mazie Hirono -- who infamously said last year that Kavanaugh did not deserve a fair hearing because he might be pro-life -- said the Senate Judiciary Committee should begin an impeachment inquiry to determine whether Kavanaugh lied to Congress.

Impeaching Kavanaugh would require a majority vote in the Democratic-controlled House, and a highly unlikely two-thirds vote in the GOP-majority Senate would then be needed to remove him from the bench. No Supreme Court justice or president has ever been convicted by the Senate, although eight lower-level federal judges have been.

The long odds didn't stop 2020 Democratic presidential hopefuls from joining in on the effort.

"I sat through those hearings," Harris wrote on Twitter. "Brett Kavanaugh lied to the U.S. Senate and most importantly to the American people. He was put on the Court through a sham process and his place on the Court is an insult to the pursuit of truth and justice. He must be impeached."

During the hearings, Harris strongly implied that she knew Kavanaugh had improperly discussed Special Counsel Robert Mueller's then-ongoing probe with a Trump-connected lawyer.

Harris provided no evidence for the bombshell insinuation, which went viral on social media and sent the hearing room into stunned silence, even as she directly accused Kavanaugh of lying under oath.

Castro and Warren echoed that sentiment and said Kavanaugh had committed perjury.

"It’s more clear than ever that Brett Kavanaugh lied under oath," Castro wrote. "He should be impeached. And Congress should review the failure of the Department of Justice to properly investigate the matter."

Warren wrote: "Last year the Kavanaugh nomination was rammed through the Senate without a thorough examination of the allegations against him. Confirmation is not exoneration, and these newest revelations are disturbing. Like the man who appointed him, Kavanaugh should be impeached."

O'Rourke claimed to "know" that Kavanaugh had lied under oath, and falsely said that the new accuser was not known to Senate Democrats or the FBI last year.

"Yesterday, we learned of another accusation against Brett Kavanaugh—one we didn't find out about before he was confirmed because the Senate forced the F.B.I. to rush its investigation to save his nomination," O'Rourke said. "We know he lied under oath. He should be impeached."

Amy Klobuchar stopped short of calling for impeachment, and instead posted a picture of Kavanaugh accuser Christine Blasey Ford with the words, "Let us never forget what courage looks like."

Bernie Sanders, meanwhile, said he backed getting rid of Kavanaugh by any legal means available: "The revelations today confirm what we already knew: During his hearing, Kavanaugh faced credible accusations and likely lied to Congress. I support any appropriate constitutional mechanism to hold him accountable."

"The far left’s willingness to seize on completely uncorroborated and unsubstantiated allegations during last year’s confirmation process was a dark and embarrassing chapter for the Senate," McConnell wrote.

He added: "Fortunately a majority of Senators and the American people rallied behind timeless principles such as due process and the presumption of innocence. I look forward to many years of service to come from Justice Kavanaugh."

The Times' piece also stated that well before Kavanaugh became a federal judge, "at least seven people" had heard about how he allegedly exposed himself to Deborah Ramirez at a party.

Ramirez had called classmates at Yale seeking corroboration for her story, and even told some of her classmates that she could not remember the culprit in the alleged episode -- before changing her mind and publicly blaming Kavanaugh "after six days of carefully assessing her memories and consulting with her attorney," the New Yorker reported last year in a widely derided piece.

The Senate Judiciary Committee, then led by Chuck Grassley, R-Iowa, wrote in an executive summary of its investigation that it contacted Ramirez’s counsel "seven times seeking evidence to support claims made in the New Yorker," but that "Ms. Ramirez produced nothing in response and refused a Committee request for an interview."

Late Sunday, Grassley's office called out the Times for omitting key details in the story published this weekend.

Additionally, the FBI separately reached out to nearly a dozen individuals to corroborate the allegations by Ford and Ramirez, and ultimately spoke to ten individuals and two eyewitnesses, but apparently found no corroboration.

The agency's investigation began after then-Sen. Jeff Flake, R-Ariz., called for a one-week delay in Kavanaugh's confirmation hearings so an independent agency could look into the claims against him. Flake said the FBI's probe needed to be limited in length to avoid derailing the proceedings with endless claims and probes going back to Kavanaugh's high school years. 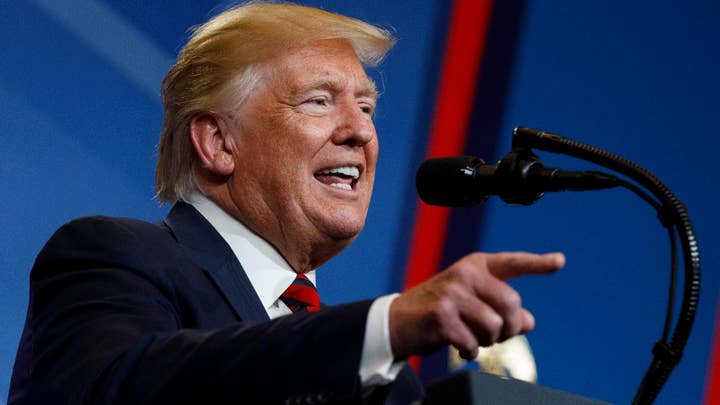 Kavanaugh, predicted by Democrats during his confirmation process to be a hardline conservative, often sided with liberal justices during the Supreme Court's last term.

The president, meanwhile, accused the media of trying to influence Kavanaugh. He also went on to say that Kavanaugh should go on the offensive and take on the media for false statements.

"Brett Kavanaugh should start suing people for libel, or the Justice Department should come to his rescue. The lies being told about him are unbelievable. False Accusations without recrimination. When does it stop? They are trying to influence his opinions. Can’t let that happen!" he tweeted.

Grassley sent several criminal referrals to the Justice Department related to alleged lies submitted to Senate investigators during Kavanaugh's confirmation process -- which could be what the president meant when he wrote Sunday that the DOJ "should come to [Kavanuagh's] rescue."

One of those referrals was for now-disgraced attorney Michael Avenatti and one of his clients, Julie Swetnick, regarding a potential "conspiracy" to provide false statements to Congress and obstruct its investigation. Swetnick's credibility took a hit as she changed her story about Kavanaugh's purported gang-rape trains, and her ex-boyfriend went public to say she was known for "exaggerating everything."

Swetnick and Ramirez were just two of several women who had accused Kavanaugh of sexual misconduct during his confirmation process. Ford most notably testified that Kavanaugh attempted to sexually assault her at a party when they were teens, and dubiously asserted that the memory was "indelible" in her "hippocampus" -- although no witnesses could corroborate her ever-changing story -- even her close lifelong friend, Leland Keyser, who Ford said had attended the party.

Keyser, according to the Times reporters' new book, did not believe Ford's story -- and refused to change her mind, despite pressure from progressive activists and Ford's friends.

"It just didn't make any sense," Keyser said, referring to Ford's explanation of how she was assaulted at a party that Keyser attended, but could not recall how she got home.

Ford's attorney, Debra Katz, was quoted in a new book as saying that Ford was motivated to come forward in part by a desire to tag Kavanaugh's reputation with an "asterisk" before he could start ruling on abortion-related cases. 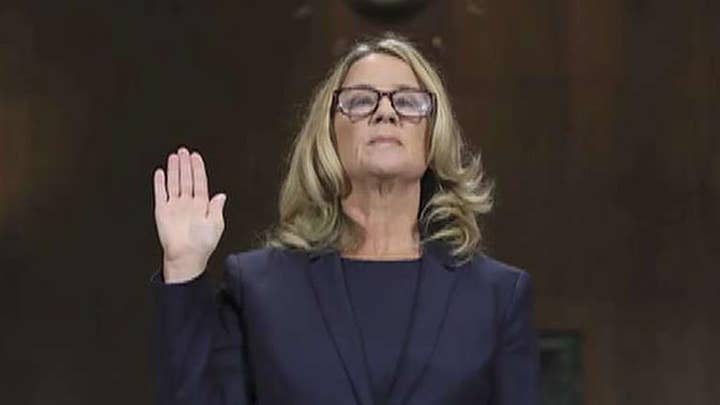 "In the aftermath of these hearings, I believe that Christine’s testimony brought about more good than the harm misogynist Republicans caused by allowing Kavanaugh on the court," Katz said. "He will always have an asterisk next to his name. When he takes a scalpel to Roe v. Wade, we will know who he is, we know his character, and we know what motivates him, and that is important.

"It is important that we know, and that is part of what motivated Christine."

Some claims that surfaced during Kavanaugh's confirmation fell apart within days. For example, Sen. Sheldon Whitehouse, D-R.I., received a call from an anonymous constituent who claimed that in 1985, two "heavily inebriated men" referred to as "Brett and Mark" had sexually assaulted a friend of hers on a boat.

The Twitter account belonging to the accuser apparently advocated for a military coup against the Trump administration. The constituent recanted the sexual assault claim on the social media site days later.