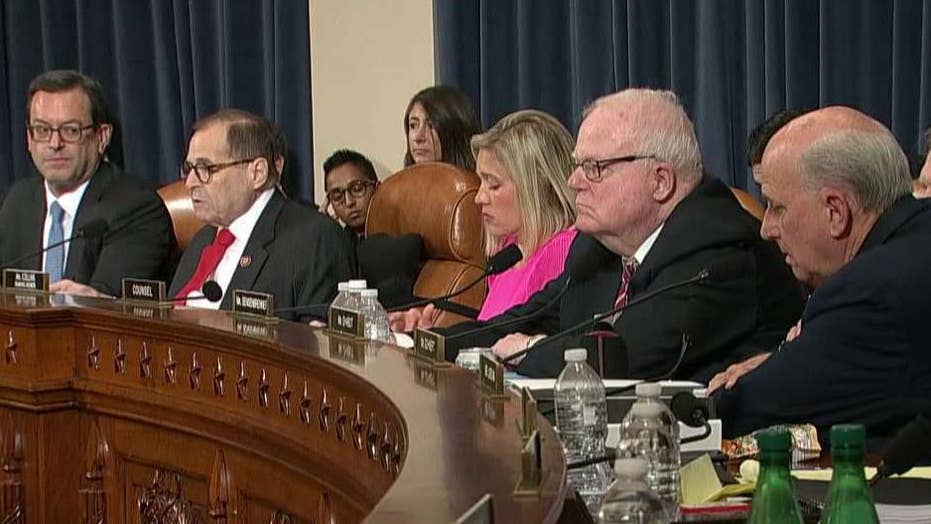 The House Judiciary Committee received the impeachment inquiry’s official findings during an unruly hearing Monday where lawyers from both parties sparred in blunt terms over whether President Trump indeed abused his power in dealings with Ukraine -- while committee members clashed repeatedly over a process Republicans decried as a "rubber stamp."

The hearing -- which consisted of lawyers for both parties essentially making their closing arguments, including by showing video clips of key statements from witnesses, Trump and others -- comes as the committee is expected to vote in the coming days on articles of impeachment against Trump.

The hearing was punctuated by partisan infighting and clashes over everything from parliamentary procedures to who should be on the witness stand.

Gaetz, however, seemed unfazed by the reprimand and, later in the afternoon, went after Goldman and Barry Berke, the counsel for Judiciary Committee Democrats, for donating to Democratic campaigns and criticizing President Trump.

"So you gave tens of thousands and Mr. Berke gave more than $100,000," Gaetz said to Goldman. "Do you think if you gave more money, you might be able ask questions and answer them like Mr. Berke did?"

The day started out with Berke explicitly alleging that Trump tied military aid to investigations he wanted Ukraine to carry out for his personal political benefit.

“The evidence is overwhelming that the president abused his power,” Berke said.

Berke showed various video clips of testimony from prior witnesses, including from Ukraine top diplomat Bill Taylor and former National Security Council official Fiona Hill, as well as clips of comments made by Trump.

Later in the morning,  Goldman made the same allegation, saying Trump “abused the power of his office—the American presidency—for his personal political benefit.”

Goldman also accused Trump of “unprecedented efforts to obstruct this investigation,” saying the Trump administration did not produce requested documents, and noted how 12 witnesses called by Democrats did not appear for testimony.

“I know that members of this committee frequently frame these complicated issues in the form of a simple question: ‘Was there a quid pro quo?’” Goldman said. “As I testified previously with regard to the requested White House call and the White House meeting, the answer is yes.”

But Stephen Castor, who appeared as counsel for Republicans on both the Intelligence and Judiciary Committees, denied the Democrats' characterization of Trump's July call with Ukraine President Volodymyr Zelensky, saying, “To impeach a president, who 63 million people voted for, over eight lines in a call transcript is baloney.”

"There is simply no clear evidence that President Trump acted with malicious intent in withholding a meeting or security assistance," Castor said.

Painting the inquiry as politically driven above all else, Castor referenced reported focus groups convened by Democrats, accusing them of testing whether quid pro quo, bribery, or extortion "were more compelling to sell to the American public."

In his second round of remarks, Castor tried to flip the script on the investigation by bringing up former Vice President Joe Biden's son Hunter and his role on the board of directors on the Ukrainian natural gas company Burisma Holdings.

The impeachment inquiry began when a whistleblower reported that Trump had pushed Zelensky to launch a public investigation into the Biden family’s dealings in Ukraine—specifically, why the former vice president pressured former Ukrainian President Petro Poroshenko to fire a top prosecutor, Viktor Shokin, who was investigating Ukrainian natural gas firm Burisma Holdings.

Hunter Biden worked for a Ukrainian gas company at the same time his father was leading the Obama administration's diplomatic dealings with Kiev. Though the timing raised concerns among anti-corruption advocates, there has been no evidence of wrongdoing by the former vice president or his son.

"Hunter Biden was not qualified to serve on the board," Castor said. "There is a legitimate bases for President Trump to have a concern over Hunter Biden's role on the Burisma board."

Tensions immediately flared as the hearing began Monday morning, with a demonstrator being removed by Capitol Police after yelling Nadler. Republican lawmakers also repeatedly sparred with Nadler over their desire for a minority hearing where Republicans could call their own witnesses – something he has not granted. The partisan parliamentary battles over obscure points of order escalated from there.

In his opening statement, Nadler argued that “every fact” from the anonymous whistleblower who ignited the probe by filing a complaint about Trump’s conversation with the leader of Ukraine over desired investigations this summer has been substantiated by the Democratic-led investigation.

"The evidence shows that Donald J. Trump, the president of the United States, has put himself before his country. He has violated his most basic responsibilities to the people,” Nadler said. “He has broken his oath. I will honor mine. If you would honor yours, then I urge you to your duty.”

Republicans opened the hearing by saying Democrats have long been motivated by a desire to remove Trump from office even before Trump’s phone call this summer with the president of Ukraine. Collins, the top Republican on the committee, said Democrats have turned the Judiciary Committee into "a rubber stamp" for House Speaker Nancy Pelosi and Schiff.

“Where is the impeachable offense?” Collins said. “This may be known as the focus group impeachment.”

Republicans on the committee repeatedly made procedural objections. Rep. Andy Biggs, R-Ariz., called for a point of order requesting Nadler schedule a minority day hearing. Nadler said that that is not the purpose of Monday's hearing and that he was considering Collins' and Republicans' request.

Republicans also were up in arms when Berke - the Democrat's counsel on the Judiciary Committee - was permitted to question Castor. Rep. Louie Gohmert, R-Texas, was incensed that a witness in the hearing, Berke, was allowed to question Castor and why Castor was not given the same opportunity.

"It's just wrong," Gohmert said. "How much money do you have to give to get up here?"

An angry Nadler shot back that Gohmert "will not cast aspersions."

The White House on Monday also fought back against the hearing, accusing Democrats of having “had their minds made up about impeachment since November 8, 2016” – when Trump was first elected.

Democrats say Trump's push to have Ukraine investigate rival Joe Biden and issues related to the 2016 election while at the same time withholding U.S. military aid ran counter to U.S. policy and benefited Russia. It’s unclear what articles of impeachment will be sought by Democrats, but it could result in impeachment charges of abuse of power, bribery and obstruction.

As Democrats draft the articles, Pelosi's challenge will be to go broad enough to appease her liberal flank, which prefers a more robust accounting of Trump's actions reaching back to Special Counsel Robert Mueller's findings, while keeping the charges more tailored to Ukraine as centrist lawmakers prefer. Democratic leaders will meet later Monday evening.

The hearing sets off a pivotal week as Democrats march toward a full House vote expected by Christmas. In drafting the articles of impeachment, Pelosi is facing a legal and political challenge of balancing the views of her majority while hitting the constitution's bar of "treason, bribery or other high crimes and misdemeanors."

Trump and his allies acknowledge he likely will be impeached in the Democratic-controlled House, but they also expect acquittal next year in the Senate, where Republicans have the majority. Trump's team is turning attention elsewhere, including Monday's release of a long-awaited Justice Department report into the 2016 Russia investigation.

A vote to convict requires a two-thirds vote of the Senate, where Republicans hold 53 of 100 seats. It is unlikely that any Republican senators would cross party lines and vote to remove Trump from office.