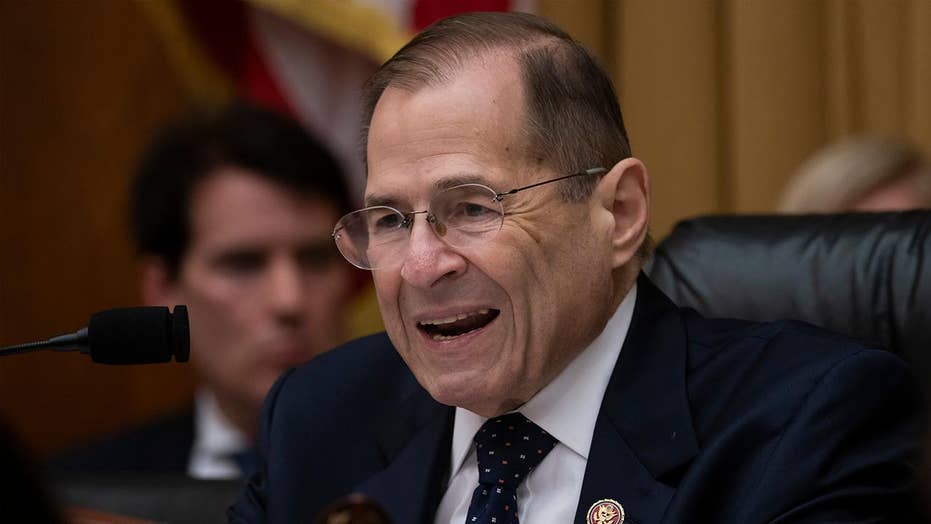 Rep. Nadler under fire for hypocritical stance on Trump impeachment

Democrats on the House Judiciary Committee on Saturday released a report outlining the constitutional grounds for impeachment, the latest sign of the committee gearing up for impeaching President Trump ahead of a key hearing on Monday.

“The Framers' worst nightmare is what we are facing in this very moment. President Trump abused his power, betrayed our national security, and corrupted our elections, all for personal gain. The Constitution details only one remedy for this misconduct: impeachment,” Chairman Jerry Nadler, D-N.Y., said in a statement.

“The safety and security of our nation, our democracy, and future generations hang in the balance if we do not address this misconduct. In America, no one is above the law, not even the President,” he said.

The updated report appears to be an attempt to challenge what Democrats say are “inaccurate” narratives about the process.

The committee was meeting over the weekend in preparation for Monday's hearing. Democrats say Trump sought a political investigation into former Vice President Joe Biden in his July 25 phone call with Ukrainian President Volodymyr Zelensky, in exchange for military aid that was being withheld and a White House meeting. Trump has denied the charges and has accused Democrats of engaging in a politically motivated witch hunt against him.

House Speaker Nancy Pelosi announced this week that she had requested the Judiciary Committee to proceed with articles of impeachment against the president. Those articles are likely to encompass two major themes: abuse of office and obstruction.

The new report hints at those charges when it outlines how a president who "perverts his role as chief diplomat to serve private rather than public ends" has met the standard of high crimes and misdemeanors laid out in the Constitution. That is true "especially" if he invited rather than opposed foreign interference, the report says.

It comes as part of dueling narratives from Democrats and Republicans as they try to sway public opinion to their side of the debate.

Republicans have indicated they intend to change the focus of the hearings should the House impeach and send articles to the Republican-controlled Senate for a trial. Trump on Thursday urged Democrats in the House to impeach him “fast, so we can have a fair trial in the Senate and so that our country can get back to business.”

He indicated that Republicans would seek testimony from top Democrats including House Intelligence Committee Chairman Adam Schiff, former Biden and his son Hunter, as well as Speaker Pelosi.